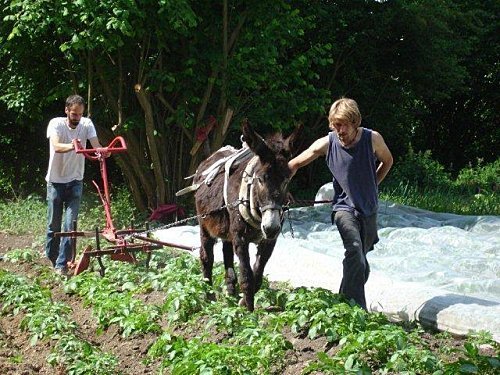 In a globalised economy, the chain between production and consumption is increasingly lengthened, so that the centres of decision-making become increasingly distant from most people.  Conventional purchasing groups which provide supermarkets with agricultural products grow significantly, creating monopolies that allow them to decide what happens, what will be sold and bought and at what price.  These groups are, above all, subject to an economic logic of profitability and profit maximisation, which results in a minimum price paid to producers.

For producers, it is practically impossible to maintain sustainable agriculture on a human scale.  Indeed, this type of agriculture does not meet the criteria of profitability and economic efficiency as the volume of production is relatively small.  To survive in a competitive world, producers must shift to an intensive and ecologically harmful mode of industrial agriculture.

At the same time, in a context of “desocialisation” of the economy where the economic sphere pursues its own targets and does not serve social purposes, the consumer is exploited and becomes an object driven by economic pressures.  Although production should be determined by the real needs of the population, it is now the supply that determines the demands and creates new “needs.”  Over-consumption becomes the norm.

In view of the hegemonic and exclusively economic model of consumption that exploits and abuses daily life, the model of “community-supported agriculture” (in French, groupe d’achat commun) offers an exemplary model of an alternative form of distribution, based on the direct partnership between consumers and farmers who practise a sustainable agriculture on a human scale.  Pricing, quality criteria, and the relationships that arise around the project, constitute the social and environmental dimension at the heart of consumption.

The idea consists in establishing a fair price that, on the one hand, guarantees a sufficient return to the farmer, and, on the other hand, is not prohibitive for the consumer.  This ideal becomes possible not only through the principle of joint purchasing, but especially through the removal of intermediaries between producer and consumer and thus by the removal of costs associated with distribution.

The quality of products from community-supported agriculture goes beyond their intrinsic qualities (fresh, healthy, seasonal, etc.) but also offers extrinsic qualities from the ethics that determines the terms of production.  Further, production is local and on a human scale, following the criterion of sustainable development.  Therefore, the products are both socially just and ecologically desirable.

The meetings of the groupes d’achats communs are moments of warmth and social proximity; they are very different from the supermarket’s “no man’s land.”  These direct relationships between producers and consumers are not merely mercantile relations based on a monetised exchange, but human exchanges: the act of purchase is charged with a social dimension.

Community-supported agriculture thus has a liberating dimension that respects the subjectivity of the producer and consumer.  The consumer is no longer merely an object of economic pressure but again becomes the central subject of the economy.  The individual consumes according to personal convictions and regains a social and ecological citizenship by actively participating in a local project.  Similarly, the producer is freed from the constraints of profitability and efficiency – an economic logic deprived of its social objectives.

One of the lessons we can learn from such groupes d’achats communs as they have grown over recent years in France, Belgium, and other European countries, is the absolute requirement to place people at the centre of the production and consumption cycle.  It is the subjective and the objective wellbeing of persons that must become the purpose of any project.  This centrality of the human often seems incompatible with economic goals in the strict sense, but as “the law was made for man and not man for the law,” the economy also must serve humankind, not the reverse.

The author is a staff member of the Centre Avec in Brussels, Belgium, a Jesuit research centre for social science.  Claire Williquet has a master’s degree in Population and Development at the University of Liege and her research is focused on social movements and citizen initiatives. You may contact Claire at cwiliquet(at)centreavec.be.

2 thoughts on “A consumption model from France and Belgium points the way ahead: Community-supported agriculture”