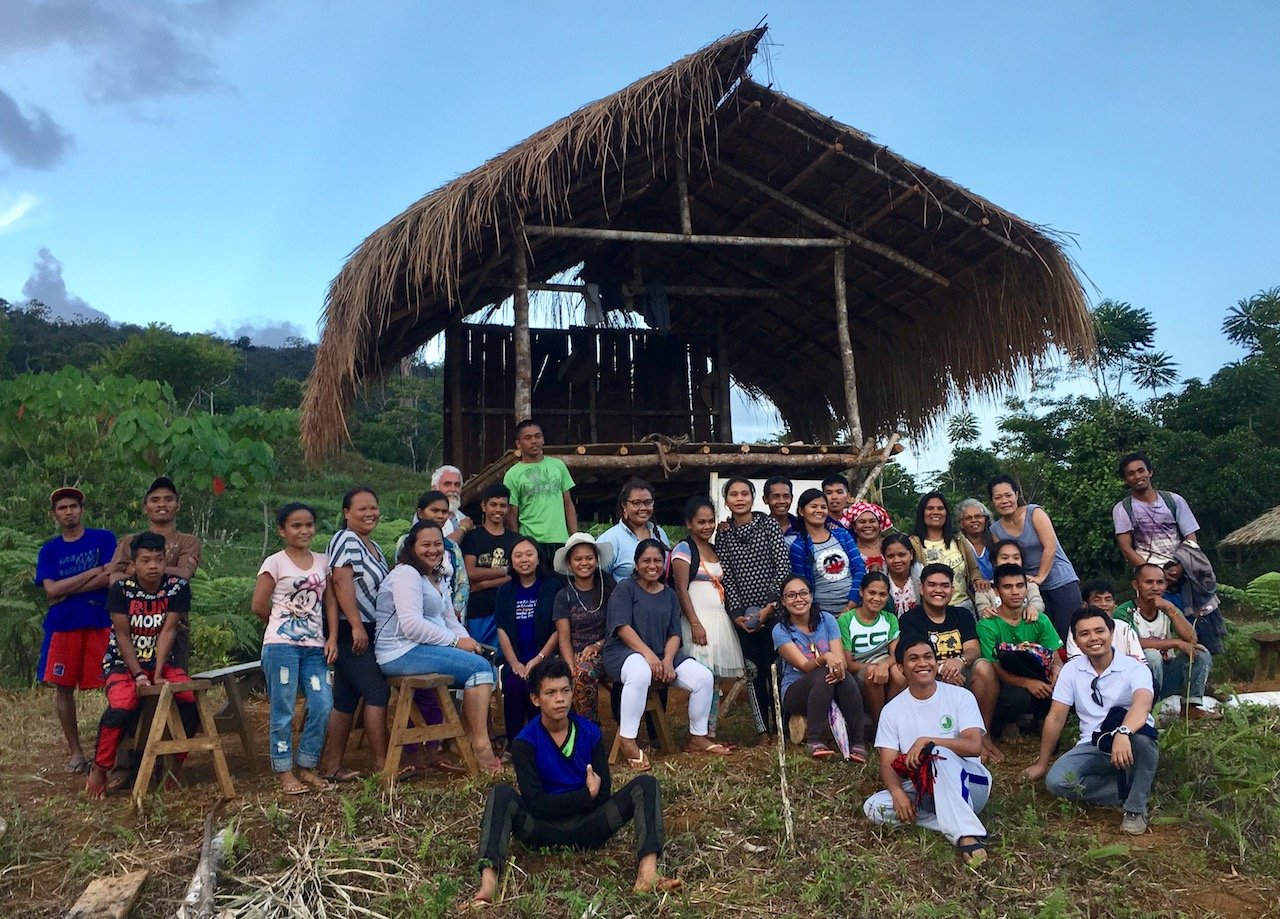 Ecojesuit shares this brief radio interview with Worldview on WBEZ in Chicago, USA where host Jerome McDonnell spoke with Pedro Walpole on climate change and its impact in the Philippines and in the Asia Pacific region, disaster risk reduction, land use change, indigenous communities, Standing Rock, youth and hope, and coming together and building a stronger sense of human society and care and reconciliation.

Jerome McDonnell (JD): This is Worldview on WBEZ.  I’m Jerome McDonnell.  We’re going to talk about the Philippines and the environment with Fr Pedro Walpole.  He’s Director of Research at the Institute of Environmental Science for Social Change and they use scientific data to make poor communities less susceptible to natural disaster.  He’s also got another title: Coordinator of Reconciliation with Creation for the Jesuit Conference of Asia Pacific.  And he’s a contributor to Loyola University’s Healing Earth textbook, a free online environmental textbook written by over 90 contributors from around the world.  Thanks a lot for joining us Fr Pedro Walpole.

Pedro Walpole (PW): Thank you, it’s good to be with you.

PW: The conversation and the experiences are different.  We don’t argue about climate change anymore.  We’re wondering how we can buffer ourselves from what we’re experiencing.

For example in the last year, we always have, in the history of things, El Niño followed by La Niña.  But we’re always appreciative that it can be worse each time. So last year for example we lost an entire crop.  And this is in the wet tropics.  This is not the dry tropics, desert areas.  And for the summer we had no rain for four months.  We lost an entire crop of anything that grows above ground.  Because the people I live with in the mountains are indigenous peoples, they are closer to the land and they have a greater subsistence.  A lot of their food is like sweet potatoes, yams, cassava.  So they know better how to sustain themselves in these difficult times.

JD: Can you describe a little more where you’re exactly there in the mountains in the Philippines?

PW: If you’re in Mindanao, you come off the plateau in Bukidnon (a central province in the Mindanao region) to the east.  I live in a valley of about a hundred kilometers.  It’s very beautiful.  It’s still forested on the higher slopes and I live with about 80 families.  They’re farmers, they grow sweet potatoes, corn, some rubber, cassava, and before they had a lot of coffee.  There’s a lot of non-timber forest products that they make, weaving and baskets.  We’re close to the land and we really experience the shift in climate events.

JD: Is there anything that scientific data can do to help a community like that?  Is there something that can help people who do seem to know how to adapt well already?

PW: I’ve been working in other areas as well because I’m a hydrologist by profession and I work with disaster risk reduction in Samar and Leyte where typhoon Haiyan hit.

Because half of the Philippines is mountainous, we’re at great risk in many areas and many people live along the rivers because that’s the land that’s often rejected by others.  Poorer people are often along the rivers and people need to come together as a community to strategize, understand where safe areas are and how they can evacuate.

All of this is a learning process that I feel we’re getting better at, and we do this as community.  This is a great help when you have a community that works and lives together.  Then we act with courage rather than with fear.

JD:  You’ve been in this country for a while and we’ve had a lot of environmental talk as President Trump has been signing legislation regarding the environment and the government.  What have you made of that kind of thing?  It seems far removed from where you’re at.

PW: I suppose this is part of human nature.  We’d like to get away from reality sometimes, and we can create other realities.  America’s a wonderful country and you have beautiful ecosystems and environment and beautiful parks and wildlife reserves.

It’s very hard to understand that any of these is threatened.  It’s very hard to come to terms that the biodiversity can be impacted.  It’s the swing of the pendulum in a way, I feel, but we’re going to center in on the problems we have globally.  Maybe things get a little worse before they get better.

I’m hoping globally we can come together because we’re 7,000 islands in the Philippines.  Already a couple of oceanic islands have been lost in the Pacific, and that means communities and cultures in the process.  And in the Philippines, millions of people will be affected if the temperature rise is sustained in the present process.

Much of the focus here is on fossil fuels and divesting from fossil fuels and a lot has been done civilly and socially about that.  I think that that’s very good and the younger generation, those in school learning the details, will be more attuned to it.

In much of Asia, we’re also faced with the problems of land use change.  When we change the ecosystems, we destabilize the natural flows of air, of temperature, of water, all these things.  We must do our part as well and it’s difficult.

I was talking to you about working on a community level, and that’s where you can get much greater resilience in terms of the climate changes.  This should build up into larger systems of local government, national government, and international agreement.

These are tough years in honesty because a lot of it is just building the right understanding and fairness in the process.  This is not a blame game.  This is really coming together and building a stronger sense of human society and care, reconciliation.  That’s what it is.  And I think that if we get that, along with the scientific information, then we’ll be able to make the right decisions.

JD: One thing that maybe we have in common with the Philippines is the indigenous people in this area who have been working as a great community like in the Philippines, and they have been inspirational on the environmental front with some of the pipeline activities going on here and in Canada, and just defending the land. There’s something we can all learn there.

PW: There is.  How communities are struggling in Standing Rock just as a community, without the pipeline, that is what has brought the people together.

What is the future of their youth?  It really is the land.  It’s not a university degree.  It’s not on excelling in business and achieving great heights on an individual level.  It’s really the community in Standing Rock that has gone through many challenges.  And it’s out of that love of life, desire for life, and knowing at times how much lack of hope and lack of security is there, that really pulls people together.  And where you get that integrity of community, then you get a voice which is really about life.

How people have spoken in Standing Rock, we’ve heard it in the Philippines.  It also gives us strength because we know the suffering of a few gives witness to the global pain, the global anxiety of where are we going.  Though there’s been much suffering and misunderstanding in society about Standing Rock, I think it also gives witness and hope to the youth and a promise of better relations in the future, both with land and with neighbor.

JD: Fr Pedro Walpole is with the Institute of Environmental Science for Social Change and they work on disaster risk reduction in the Philippines and he’s a contributor to Loyola University’s Healing Earth textbook.  It’s a free environmental textbook that’s online, written by 90 contributors from around the world. I assume you are one of them.

PW: I was very happy to be part of the group when this was initially discussed and then writing the text.  It’s really a grand program.  We need so much more material like this, especially whether it’s for last year high school, first year college.  It helps young people integrate the world they live in.

We talk about energy, we talk about water, we talk about natural resources – all of these things interrelate.  We talk about food security and biodiversity and all the changes that are happening.  So it helps people see a broader, more complex world that we’ve got to live in.

Sometimes in an urban life and in academic life and as you go through college, there’s so much of the world reality that’s blocked out.  This really helps us put the different pieces together.  It helps the youth and young professionals ask questions that are much more integrative.  That’s really what we need for a better world.

JD: In this Healing Earth textbook, it has real-life examples. With every lesson about something, there’s something that happens in real life, it’s concrete.

PW: Yes.  We’re really challenged at this stage now.  We’re starting to see if we can write six case stories from each continent about each topic.  We want to draw on the lives of people in Africa, the challenges that they’re meeting.  We want to talk through Asia, whether it’s people in China down through Australia.  We need people’s life experiences.

This is very important to engage with.  I use it in courses where I’m talking about leadership of service.  That’s really where Healing Earth textbook helps. It opens youth to an understanding of sustainability, of people and landscape.  Because if you go through those six topics, you cannot but confront sustainability.  And in that, there’s the human spirit as well, a spirituality, a love of all life, a sense of awe, and much greater consolation from the world that we live in, and therefore what we need to do.

I feel that that’s a good way to start to engage the world, a good basis to make clear decisions as human beings.  We’ve really got to think globally – but think globally in a manner of reconciliation, in a manner of humble leadership.  That’s what I feel young people are challenged to do and it’s also what gives them great hope. We need hope.

I always say that when people come to the village culture-based school we run in their own language.  Sometimes the visitors want to bring notebooks, and toothpaste, and chinelas (flip-flops), and that’s great.  We need the material things.  But most of all I say, look, when you’re with the children, listen to their stories and see how you can share hope with them.  That’s what we need.

Pedro Walpole, SJ is also the coordinator for the Global Ignatian Advocacy Network-Ecology and joined the fourth annual Climate Change Conference of the Institute of Environmental Sustainability in Loyola University Chicago in March 2017.  The creation of the Healing Earth  environmental science e-textbook is a response of the International Jesuit Ecology Project  to address major environmental concerns through an educational resource and to develop collaboration among teachers and learners in secondary school, university, and adult education contexts.

2 thoughts on “A conversation on climate change and responses, community and social justice, youth and hope”