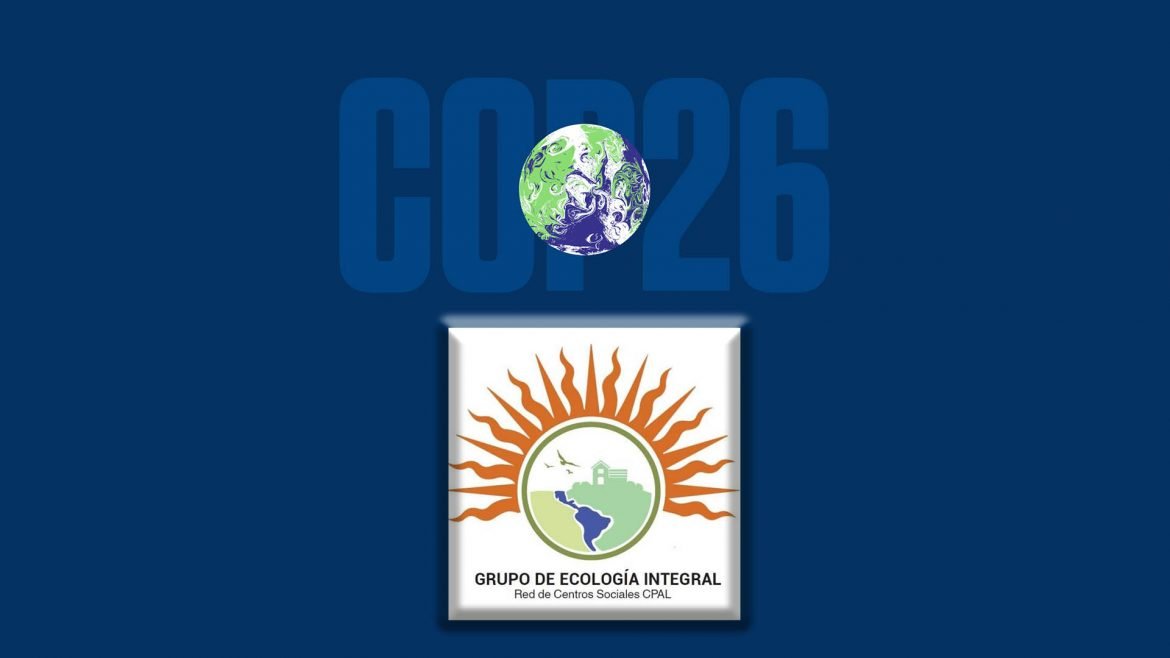 The Integral Ecology Group of the Social Centers Network in the Jesuit Conference of Latin America and the Caribbean or CPAL (Grupo de Ecología Integral de la Red de Centros Sociales-Conferencia de Provinciales en América Latina y Caribe) publicly denounces the profound process of exclusion and invisibility promoted by the official bodies of the Conference of the Parties on Climate (COP26), with respect to the voice of social movements and traditional communities in Latin America and the Caribbean.

During the last eight months, this group of social centers has been following, monitoring, and seeking to participate in the official regional and global activities of COP26, along with promoting ongoing dialogue and analysis with traditional communities and social movements who are involved in and impacted by socio-environmental issues.

Given this, we realize that these communities and social movements are not being adequately heard, despite their roles as guardians of territorial rights and who preserve most of the biodiversity by combining social innovations and technologies with secular knowledge and despite being located in some of the territories most affected by climate change.

Throughout the entire process of the preparations for COP26, despite the insistence and use of numerous dialogue strategies, both national governments and the organizations responsible for COP26 refused to listen to what these peoples and organizations had to say about the current global crisis we are experiencing.

In part, this silencing is due to the fact that we have increasingly denounced the false solutions used by these actors in relation to the climate policies issued in the last 25 years of this climate conference. Evidently, this space has become a large economic negotiating table that only serves the interests of those who already benefit from the current crisis, widening the gap of socio-environmental inequalities in our continent. Their decisions in no way reflect the real aspirations of the peoples and organizations living in the most affected territories and perpetuate the commodification of nature and the trivialization of human life in its most basic principles and rights.

Therefore, we join the Declaration of the Latin American and Caribbean Climate Justice Week (Declaración de la Semana por la Justicia Climática de América Latina y el Caribe) denouncing the false solutions given by these governments and these large corporations about “Smart Agriculture”, the importance and safety of large mining projects and the effectiveness of reforestation practices with exogenous species to balance global deforestation.

Based on this evidence and supported by the perspective of Integral Ecology given in the Encyclical Laudato Si’, we reaffirm:

That the climate justice agenda must be oriented towards a systemic and radical change in the current system of production and consumption;

That the immediate implementation of the Escazu Agreement (Acuerdo de Escazú) by all countries of our continent is necessary, as a public policy to defend the defenders of territories and nature;

That Nature must be subject to Rights as well as human beings; and

That the voices of those who represent the communities and traditional peoples who have inhabited and preserved these territories for centuries be heard and elevated to protagonists of real solutions and therefore, we demand that their proposals for good living be taken into account by governments and corporations.

“The establishment of a legal framework which can set clear boundaries and ensure the protection of ecosystems has become indispensable, otherwise the new power structures based on the techno-economic paradigm may overwhelm not only our politics but also freedom and justice.” (Laudato Si’ 53)