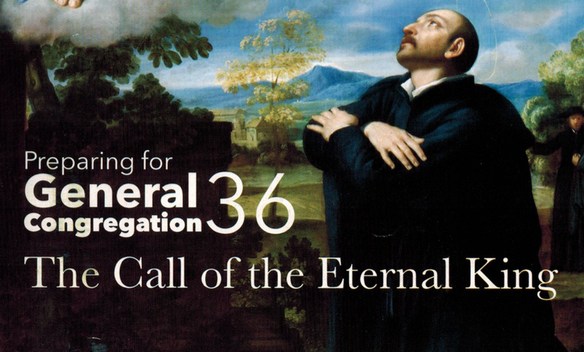 The Society of Jesus has some peculiarities in its form of government.  While supreme bodies of other religious congregations meet periodically every three, four, or five years, for the Jesuits, their supreme body called the General Congregation (GC) meets only to elect a new Superior General because of death, incapacity, or resignation of the current.

Indeed, the Superior General is elected “for life,” something quite unusual in our time, but this was how it was established by the founder, Ignatius Loyola, and it has remained so for over 400 years.

But the GC is also the time when new lines of action are identified, or others previously established are confirmed.  As Father Nicolás said recently when asked about his expectations for GC 36: “This observation contains my expectations.  Thus, I hope that the fruits of the Congregation will be a better religious life in the spirit of the Gospel and a new imagination in approaching our mission.”

We can say that this “renewed imagination,” this ability to look further and in depth, would be desired by many as the outcome of GC 36.

Since GC 32 (1975) under the leadership of Father Pedro Arrupe defined the mission of the Society as “the service to the faith, of which the promotion of justice is an absolute requirement” (Decree 4, Number 2), the Jesuits have strived to live a “faith that does justice.”

It has not always been easy nor obvious how Jesuits should carry out this vocation.  The world has put us in totally conflicting contexts.  While some Jesuits lived in affluent and consumerist societies, others remained under totalitarian regimes that denied basic freedoms such as religious freedom.  Other companions lived the call to promote justice in societies where a small elite, through the use of violence, kept the majority of the population in extreme poverty.

GC 34 (1995) confirmed the mission of the Society as “the service of the faith and the promotion of justice” but recalled the importance of the context in which these actions are carried out, so there is the need to be attentive to the cultural contexts, and very specifically, to the inter-religious dimension.

But besides that, GC34 recalled the importance of “dialogue” as the category that should guide all our actions.  Trying to overcome moments where violence or political control caused more polarized reactions, the Society seeks dialogue as a full testimony of Jesus, the Incarnate Word.

GC35 (2008) confirmed once again the pair of “faith and justice” but noted that this mission is a ministry of reconciliation – with God, with others, and with creation. (Decree 3, Numbers 12 and 31-36)

For the first time, the Society of Jesus acknowledged in one of its official documents the fundamental place of its institutional environmental responsibility.  This statement by the GC would be later on strengthened with the document Healing a Broken World (2011)  by the Social Justice and Ecology Secretariat, which provided a far broader awareness among Jesuits and collaborators.

In this brief and simplified tour, there is the growing awareness in the Society of Jesus of the importance of environmental challenges of our times.  We recognize that we have moved, and we keep moving, but much more slowly than civil society.

Certainly the environmental movement, the scientific research community, and even the industry and the business world, have developed faster awareness of the ecological crisis.  And if we consider some specific countries like Germany or the Nordic countries in Europe, we must recognize that environmental concerns are not a passing temporary fad, but are part of a strong social conscience.

In the Catholic Church, whose response to the ecological crisis has also been behind the times except for some solid declarations, the encyclical Laudato si’ of Pope Francis (2015) has been a huge boost, first for awareness but, we strongly hope, also in promoting community-based action by the Church.

Pope Francis emphasized the link between the environmental crisis and the social crisis we live in.  Poverty, social exclusion, and marginalization are deeply linked with environmental degradation.  These are not two separate crises but one that is a symptom of something much deeper brought about by the wrong way our societies are organized in terms of production and consumption and an economic system that has a predatory logic and encourages a throwaway culture, both of natural resources and of people.

Therefore, insists Pope Francis, the solution requires a deep and radical response.  We must divert the direction of our development if we want it to become sustainable not just through superficial changes.  We need a new way of producing and consuming if we want to put God’s creation at the centre: that is, people and nature.

Will the GC 36, in the “exercise of imagination” proposed by the Father Nicolás, be able to offer new prospects so the Society of Jesus can respond – as a body – to the environmental and poverty challenges our world is facing?

Will we Jesuits be able to read the signs – sometimes dramatic and certainly threatening – of our time?

The fundamentals are already placed after the developments we have described both in the Church and in the Society.  We cannot expect less from GC 36 other than what is already proposed by Pope Francis in Laudato si’ or what the Society proposed to do in “healing a wounded world.”

The “exercise of imagination” should not be directed in producing more statements – in fact it would be difficult to improve on what is already presented by Laudato si’ –but the GC should recommend actions by Jesuit communities and institutions in a broader social commitment.

Obviously it is impossible to know today what the Congregation will discuss, but some issues that should not be missing on its agenda should be:

Lifestyles, both personal and community

There is a huge range of initiatives that can be implemented and apart from goodwill, competent advice from professionals and practitioners must be sought for more effective action in energy saving, the adaptation of buildings, responsible consumption, among others.

The accompaniment and closeness to the most vulnerable communities

Without this closeness, it will be impossible to understand the magnitude of the challenges and how communities can respond.  Special attention must be given to regions such as the Amazon or the Congo basin as these environmental reserves are essential for the future of humanity.  These regions are also more sensitive to the impacts of climate change and its degradation and destruction will cause much suffering, loss of lives, and the displacement of millions of people.

The responsible management of our investments

Province funds are needed to support apostolic works but must be invested with integrity.  Some of the most important current issues include divesting investments in fossil fuel companies or ensuring that Jesuit institutions do not invest in companies involved in the plundering of natural resources.

Deepening the contribution of our educational institutions

It is not only the “excellence” of our students to develop professional skills that will lead to the success of well-paid careers. The education “for others” should include men, women, and Creation.  Our educational institutions must be leaders in promoting social and environmental sustainability and shifting “excellence” to “leadership for service.”

The celebration of creation as a gift that we receive

While the contemplation of the Incarnation in the Spiritual Exercises plunges us into the dynamic of salvation that God offers, we need to realize that this salvation includes all creation and also the environment in which we live.  We need to celebrate creation to appreciate “so much good we have received.”  Only gratitude, as we learn in the spirituality of Saint Ignatius, has the capacity to mobilize to follow the Lord in a long-term engagement and free of ideological baggage.

As we approach GC 36, we would like to invite the readers of Ecojesuit to share with us their expectations about what should be our commitment and the response to the environmental challenges and social inclusion.  We have started with this article a series of reflections that we hope will promote dialogue and look for common grounds and the common good.

2 thoughts on “A renewed imagination in meeting our mission”