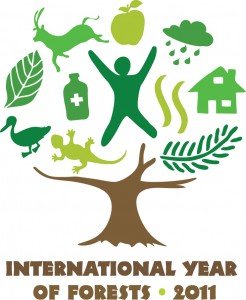 The status and the development of the world’s forest resources are the focus of attention of this year’s UN campaigns for raising awareness on sustainable development. While 2010 was dedicated to biodiversity, 2011 has been declared the International Year of Forests.

Despite ongoing negative trends, the surface extent of the world’s forest resources still appears impressive. According to the UN, the total forest area in 2010 was estimated to be 4 billion hectares, which corresponds to an average of 0.6 hectares per capita. The area of forest is however unevenly distributed. Whereas the Russian Federation, Brazil, Canada, the US, and China account for more than half of the total forest area, 64 countries have forest on no more than 10 percent of their land area, and 10 countries of the world have no forests at all – among them the Vatican State.

Forests have various functions, which are decisive for human welfare and for the stability of whole societies. The UN’s recent Global Forest Resources Assessment (FRA) reports that eight percent of the world’s forests is designated for protective functions such as soil and water conservation, avalanche control, desertification control or coastal protection.

But forests also provide social services, covering recreation, tourism, education or the conservation of cultural and spiritual heritage, whereas the economic importance of forests derives from services such as food supply and the provision of timber and wood or non-wood products.

The FRA also reports that the value of non-wood forest products alone was US$18.5 billion in 2005.

Finally, the management of forests has a significant impact on the extent of climate change. It is estimated that the world’s forests store 283 gigatonnes of carbon. Halving deforestation rates by 2030 would reduce global greenhouse gas emissions to such an extent that damages from climate change estimated at more than US$ 3.7 trillion could be avoided, says a recent study on the Economics of Ecosystems and Biodiversity (TEEB 2010).

Despite their biological, socio-economical and cultural value, forests continuously decline and efficient protective regimes are still missing. Over the course of human history, the total area of forests declined from an estimated six billion hectares 8,000 years ago, to today’s 3.8 billion hectares.

On the other hand, in Western industrialised countries it is not the forest surface as such which is threatened but the vitality of forest ecosystems. European forest habitats record increased signs of damage due to disease: in 2005, more than 26 percent of all trees were regarded from their tree canopies as being seriously damaged or dead, according to the 2006 report of the German Federal Ministry of Food, Agriculture and Consumer Protection (BMELV 2006, pdf).

The reasons for the global forest loss are manifold. Apart from natural factors such as weather, the patterns of animal activity and diseases, anthropogenic factors such as the overexploitation of forest products, unsustainable logging, uncontrolled grazing and pollutant loads cause destruction at alarmingly high rates. The main cause of the loss, however, is the conversion of forest land into areas of crop cultivation.

There are, nevertheless, also positive tendencies in the worldwide forest management. As stated in the FRA, forest planting, landscape restoration and natural expansion of forests significantly reduced the net loss of forest area in many countries. Primary forest areas in several European countries, as well as Japan, registered positive change rates. Considerable progress was also made in developing forest policies, laws and national forest programmes. Brazil and Indonesia, having had the highest net losses in the 1990s, succeeded in reducing the destruction, although the negative trends are far from being overcome.

The development of forests has also become a concern for the Society of Jesus and its engagement for faith and justice: The Jesuit Asia Pacific Conference recently introduced an own carbon offset scheme: Forest from flights. For every flight taken by a member of the Society on Conference business, a $5 will be given to rural communities in Cambodia, Indonesia and Philippines to help them renew the forest from which they live.