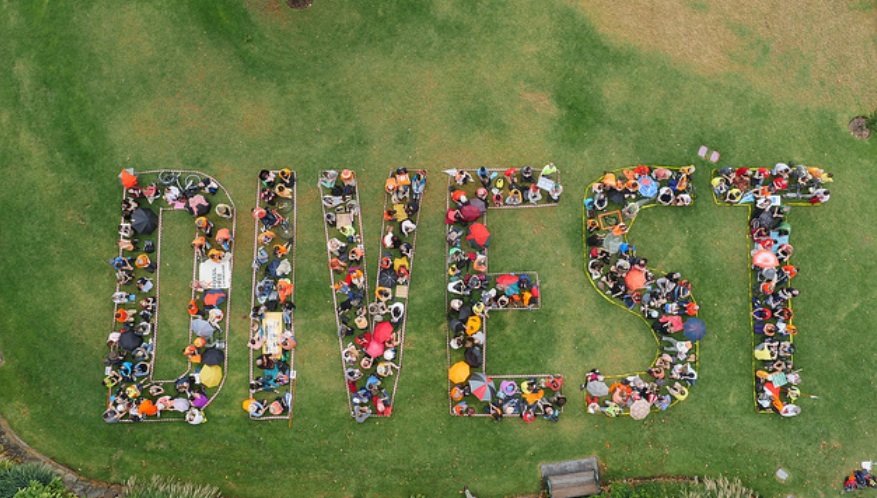 As we discussed the risks, nuts, and bolts of fossil fuel divestment during the recent Second Annual Climate Change Conference hosted by the Institute of Environmental Sustainability, Loyola University Chicago, I shared the prayer Patient Trust that Jesuit scientist and theologian Pierre Teilhard de Chardin wrote.

“Above all, trust in the slow work of God. We are quite naturally impatient in everything to reach the end without delay. We should like to skip the intermediate stages. We are impatient of being on the way to something unknown, something new. And yet it is the law of all progress that it is made by passing through some stages of instability – and that it may take a very long time. And so I think it is with you; your ideas mature gradually – let them grow, let them shape themselves, without undue haste. Don’t try to force them on, as though you could be today what time will make of you tomorrow. Only God could say what this new spirit gradually forming within you will be. Give Our Lord the benefit of believing that his hand is leading you, and accept the anxiety of feeling yourself in suspense and incomplete. Amen.”

Without undue haste? Trust in the slow work of God? The difficulty is that the issue of fossil fuel divestment comes with a degree of urgency!

I presume that most conference participants do not need convincing that “business as usual” carbon practices will trigger irreversible climate impacts felt by all but disproportionately borne by the least culpable: the poor and the young. If extracted and burned, the proven reserves will outpace the 2 degree Celsius carbon budget by three to five times and on our current track, it will happen within 20 years.

We know the overwhelming scientific consensus that human activity is the major contributor that compels this humanitarian, ethical and spiritual priority described in Father General’s Letter On Ecology (2011) and the accompanying report, Healing a Broken World. Noting humanity’s primary role in the crisis, Pope Francis calls it a “slap in the face” to nature and a betrayal of the Creator during his recent Asia Pacific visit.

And Dr James Hansen, co-writing with the past 20 winners of the Blue Planet Prize, assert: “In the face of an absolutely unprecedented emergency, i.e. climate change, society has no choice but to take dramatic action to avert a collapse of civilization. Either we will change our ways and build an entirely new kind of global society, or they will be changed for us.” Dr Hansen, formerly Director of the NASA Goddard Institute for Space Studies, is Adjunct Professor at Columbia University’s Earth Institute, where he directs a program in climate science, awareness and solutions.

This morning, we consider our financial assets and how they might best be leveraged to address the issue of climate change.

Canadian and US Jesuits have actively pursued shareholder responsibility since 1974 through a working group that has become the Jesuit Committee on Investment Responsibility or JCIR. We are in good company with many religious women’s congregations who are leaders as well as other non-Catholic denominations and coalitions.

JCIR promotes social change in corporate practices and collaborates with other investors working for corporate social responsibility. We support international norms for sustainability, environmental justice and human rights, and make the fiscal case that Catholic social teaching principles best serve the interest of all stakeholders and preserve long-term shareholder value. JCIR respectfully engages selected companies on issues when we have a proficiency, interest and capacity.

Socially responsible investment (SRI) is a work of structural justice. As active shareholders, JCIR expresses to corporations the concerns and experiences of Jesuits and communities who witness the social impacts of multinational corporations both here and abroad.

Over the past 12 years, JCIR led shareholder dialogues yielding corporate human rights policies with Chevron, Occidental Petroleum Corporation, OM Group, Monsanto, The GEO Group, and Corrections Corporation of America. In the agricultural sector, JCIR worked with Ingredion Incorporated  and Bunge Limited  regarding water sustainability through the supply chain. To engage a company through a shareholder resolution requires stock ownership of at least US$ 2,000.

I would concede that if asked one year ago whether a divestment movement would be an effective strategy, I would probably answer, as I had with other divestment campaigns, that active engagement would yield better outcomes than passive screens which various groups developed for companies, ranging from arms manufacturers to various “sin stocks.”

Yet through conversation with others and consideration of the scientific consensus, the perspective of some JCIR members, myself included, are gradually forming (to use Teilhard’s words) over the past year on the fossil fuel issue. The issue seems different in scale and perhaps in strategy. As Archbishop Desmond Tutu said in September 2014, “The destruction of the earth’s environment is the human rights challenge of our time.”

I recall a conversation with Father Jim Hug who observed this issue might warrant a “both/and” rather than an “either/or” approach. That insight opened a new horizon for me. This came around the same time that University of Dayton made their announcement as Dr. George Hanley outlined, and JCIR also received a fossil fuel divestment resolution from a Marquette University alumni group.

Presently, JCIR encourages institutions (and provinces) to prayerfully discern the significant role of fossil fuels in regard to climate change. I imagine that many attending this conference may have wrestled with this more extensively than some of our provinces, perhaps animated through your own stakeholder pressures. Generally, provinces do not need to answer to student, faculty or alumni resolutions.

However, in the coming year, as the Society prepares for the next General Congregation, provinces will be receiving formal written recommendations (known as postulata) from Jesuits which voice movements among members responding to signs of the times. In preparation for the last General Congregation in 2007, provinces around the world submitted 41 environment-related postulata. Only social justice featured higher in the hearts and minds of Jesuits, which had 42.

To facilitate discernment within our own institutional and provincial contexts the JCIR, with consult of our friends Nancy Tuchman of Loyola University Chicago, Father Jim Hug (former Center of Concern President), and Chris Kerr (Executive Director of the Ignatian Solidarity Network), we are drafting a reflection to help institutions consider this through an Ignatian lens, lest conversations bog down in familiar encampments of “students versus administrators” or “with us or against us” faculty coalitions.

While the paper is not yet ready to distribute, hopefully it will be soon, perhaps drawing insight from the upcoming Ecology Encyclical. It would clearly simplify matters if the Encyclical provided a clear opinion on the preferred investment strategy question, but it may not get so detailed as most Catholics in the world do not have stock portfolios to worry about.

It is safe to say that designated alternative investment into renewable energy positions is an important component for all institutions to consider as a way to help affirm and capitalize these new green technologies.

Yet on the question of divestment or active engagement it seems that a reasonable case and strong examples can be found deploying both strategies. As Teilhard says so well, we may feel some anxiety in this ambiguity “in suspense and incomplete.”

John Sealey is from the Jesuit Committee on Investment Responsibility and serves the North American Jesuit provincials with regard to socially responsible investing. John shared some Ignatian discernment perspectives on the fossil fuel divestment issue during the Second Annual Climate Change Conference at Loyola University Chicago last 19 to 21 March 2015. He may be reached through his email jsealey(at)jesuits.org for further information.