The Episcopal Commission for the Amazon of the National Conference of Brazilian Bishops (Confêrencia Nacional dos Bispos do Brasil or CNBB) in partnership with other ecclesial and civil society organizations launched Amazoniza-te (Amazonize yourself), an awareness and care campaign for the Amazon on 27 July.

The campaign takes place at a time when the situation is aggravated by the Covid-19 pandemic: deforestation and land grabbing, fires, legal and illegal mining are being intensified, becoming agents of proliferation of coronavirus in the Amazon region communities. The dismantling of public environmental protection agencies, the continuous disregard for legislation, as well as the absence of civil society participation in the areas of regulation and control of public policies also motivated the creation of the campaign.

It is an invitation for actions that articulate the leadership of traditional peoples and communities, the Catholic Church and different ecclesial bodies in the Amazon, artists and opinion makers, researchers and scientists.

The “Amazonizing” call proposes the active participation of all people in defense of the Amazon, its biome and its peoples, threatened in their territories: voices joining together in the face of the reality of many violated lives; lives expelled from their lands, tortured and murdered in agrarian and socioenvironmental conflicts, victims of a policy geared to the interests of agribusiness and to large developmental economic projects that do not respect the limits of nature or its preservation.

The initiative joins the stream of activities implemented over the past few years in view of the Amazon Synod. With Pope Francis, the Amazon region and the lives of the peoples who inhabit the region gained the center of debates in the Church. “In the Amazon there are all kinds of injustice, destruction of people, exploitation of people at all levels, and destruction of cultural identity,” pondered Pope Francis at the end of the Synod. 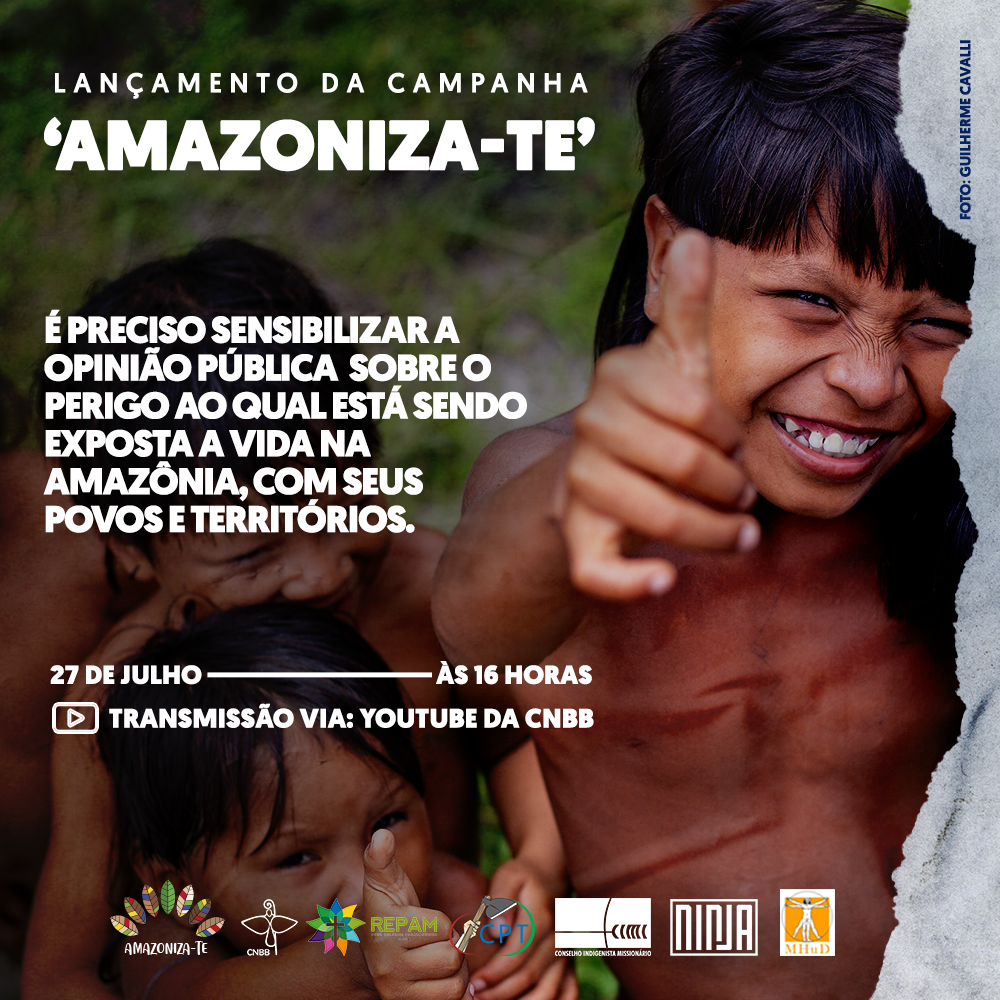 Supporting materials, manifestos from assisting organizations, studies on the reality of the Amazon, are shared in the Amazoniza-te website, along with a series of videos with testimonies from the traditional populations of the Amazon in dialogue with the voices of national and international artists. A list of concrete actions to be taken personally or collectively to Amazonize yourself will also be shared.

The Amazonize yourself campaign is structured around three lines:

1. Vulnerability of Indigenous Peoples and traditional communities to contamination by the new coronavirus, with emphasis on the inadequacy of the structure of public health care in the region’s states and municipalities, which is below the conditions of other regions of the country

2. Acceleration of the destruction of the Amazon Biomes due to the uncontrolled increase in deforestation, fires, the invasion of indigenous territories and traditional communities by agents of land grabbing, mining, livestock and planting monocultures, and the effects of hydroelectric power plants on riverside populations

3. Systematic violation of environmental protection legislation and dismantling of public control agencies, through intentional action by the government to deregulate and expand, unlawfully, the activities of mining companies, agribusiness, loggers and ranchers in the region.

This story is excerpted from the CIDSE press release on the Amazonize yourself campaign launch. CIDSE is a network of Catholic social organizations from Europe and North America.