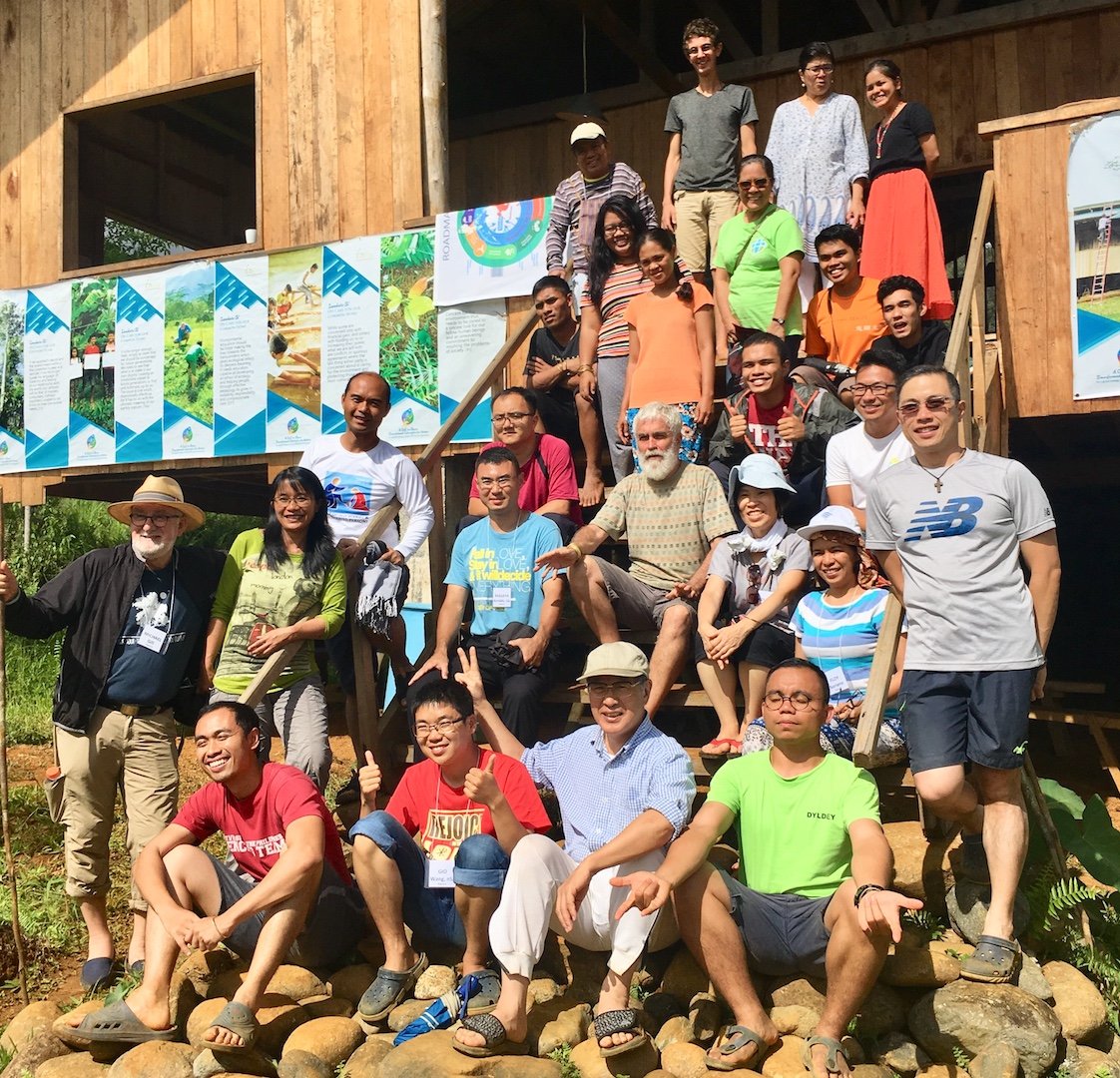 After spending four days at the Living Laudato Si’ spirituality for action workshop in Bendum, Bukidnon province in the Philippines, I am left with just one word that resonates across my lips, my heart, and my soul.  That word is enormous.

Enormous can refer to much more than quantifiable size: it is a word that describes something immeasurable, beyond limit or the human ability to comprehend.  Enormous goes much deeper, wider, and broader than what can be conceptualized with mere letters.

That is precisely what is happening under the tutelage of Fr. Pedro Walpole SJ, in the cluster of indigenous villages scattered among the steamy, verdant, and sacred mountains of Bukidnon.  Everything about what is going on here is enormous: the scope of the devastation of the land, the enormity of the loss, the strength and resilience of the people, all the way to the grace and wonder of the reconciliation, healing and (re)growth that is currently happening.  Confusion and uncertainty, agony and loss, despair, hope, peace, and regeneration: it’s all simply huge.  It was also simply an immense thrill to be able to be a part of it during the four-day workshop.

The Living Laudato Si’ workshop, organized by the Jesuit Conference of Asia Pacific (JCAP) was held from 29 May until 2 June.  It is the second workshop  since January, and this round drew in about 25 participants from across the Asia Pacific region, including Australia, China, Hong Kong, Indonesia, and even the United States.

Convened for the purpose of successfully enabling the attendees to integrate the values in Pope Francis’ encyclical Laudato Si’ and then take this knowledge back to their various faith communities, the workshop was set in the context of the indigenous communities in Upper Pulangi.  As one of the local Pulangyen teachers explained, her people exist entirely to care for their land.  This is the foundation and reason for us coming to Balay Laudato Si’ for the workshop.

The focus of the workshop was centered around four goals: to discuss and collaborate with the youth of Generation 2030, to understand their ecological hopes and challenges; to deepen an understanding of “integral ecology” and how this can be applied in daily life, to form and strengthen cohesive faith communities devoted to a common goal of reconciliation with creation, and to discern and set forth concrete plans that can be carried out in our various communities of practice.

There was time to learn from the local community organizers and Indigenous Peoples in various ways.  We had time to hike into the nearby forest, to take a prayerful ecology walk and learn about the history of the land.  We also spent one morning of discussion with the local women weavers, who earn their [quite precarious] livelihood by weaving grass mats, purses and bags, and other art creations.

This was a morning of enormous emotional depth, as the women opened up about their difficulties and fears: not only in earning enough money to make their way, but also in passing on their knowledge to their children and young ones of the village.  Many of the youth seem determined to leave the village.  As the women weavers explained, they are allured by the promises of modernization and more secure wealth away from home.  In fact, a total of five youths are currently learning to weave, a desperate number because of how complicated and time-consuming the weaving process is.

The women understand the difficulty, and ultimate impossibility, of forcing the younger generation to learn a difficult trade that they might not be interested in, or even fully understand.  At the same time, the older generation fears that the knowledge and the traditions they follow are in danger of simply fading away due to this lack of interest and dedication.

It wasn’t long into the workshop and our sharings before the true enormity of what’s happening in Bendum came to light.  Here, people do not have a sense of identity apart from the forest (what is referred to as their ancestral domain).  As Mercy Pakiwag, one of the local teachers and peace and reconciliation coordinators, explained, the foundation of the way of life for the people of Bendum is care for the forest.  The land is not just simply where they live, or how they use it to get by.  The people are as rooted to the earth and its health as are the many different species of bamboo around them.  In fact, their very identity, even the names of the different clans, come from the rivers that define their ancestral domains.

This sense of identity, and the feeling of strength that arises from having such a clear and unwavering sense of purpose and connection, is also enormous.  These forces can literally be felt in the air, in the soil, in the rain that streams and pounds and courses through the land and gives it life.  There is a sense of something deeper and more sacred than words could ever describe.  This pervades the spirit of Balay Laudato Si’; it is in essence the very spirit of the people.

And so, it was not hard to imagine the immensity of things going wrong when loggers first came to the area in the 1970s and began to denude the forest.  The devastation at this time was not just ecological.  The loggers were literally tearing up and derooting the heart and soul of the people, denuding their sense of belonging.  As the land suffered, so did the people: values, cohesion, and the indigenous way of life were all exposed to erosion and drought just as were the open hillsides.

It was this damage that Fr. Pedro Walpole (or Amay as he is respectfully called by the local people he works with) saw when he first arrived in the 1980s.  The overwhelming sense of loss and confusion he first witnessed among the people is still readily apparent as he shares his first experiences of Bendum.  Even decades later, his voice is charged with emotion as he explains that in his first years in Bukidnon, all the hillsides in the area were completely bare.  Originally one of the densest and most diverse and abundant rainforest in Mindanao, his view from his house was at that time completely unobstructed.

Fr. Pedro has remained in Bukidnon for over 25 years now, and his work has been tireless.  It has also been work of incalculable grace: not just to assist the forest in its own regeneration, but to guide the people to their own regrowth as well.  Amay is meticulous in clarifying that his job is not to simply replant trees or fix the social issues of the indigenous people.  He is not a mere medicine man for the people, or a healer or just “another” social justice worker.  He is there to assist in helping people find their own reconciliation, to reclaim their own identity, and to walk their own journey of healing.  It is ultimately their own work, because it is their land and their identity.

Of course, this is enormous.  It is the work of a lifetime, and we as workshop attendees immediately intuited that.  We spent time discussing our concerns that not all of us can engage in this Laudato Si’ work in the same ways or with the same depth that Fr. Pedro has done.  Yet the workshop was aimed at equipping us with what we need, where we are and in our own capacities.  What we took from the conference, Fr. Pedro was consistent in reminding us, would be the beginnings, the seeds, of change, and they are meant to grow in each of our lands, wherever we’re from and wherever we go back to.

The depth of our hope and the graces we received from the time in Bukidnon were also enormous.  In reflecting on my days in Bukidnon, the change that I make doesn’t have to be on the same scale as Fr. Pedro.  It can’t, because I don’t have his background, experiences, or number of years in service.

Yet that shouldn’t – can’t, mustn’t – stop me from doing what I can to integrate and faithfully live out the challenges of Laudato Si’ in my own faith community, in my own community of practice.

I am exceedingly grateful I had this chance to worship, laugh, and cry with people who share the same hopes I have for this world.  I am so humbled to have had the chance to meditate on the depth of the mysteries of creation, watching the sunrise over the sacred mountains of Bukidnon.  I am filled with joy remembering my barefoot walk, immersing my feet in the mud and the soft rainforest coverage, sometimes stumbling but always connecting with the earth.  I am thrilled to have been able to stay up late into the night talking, laughing, and dancing with others who believe in and work tirelessly for peace and reconciliation with creation.

The enormity of my hope, right now as I write this, defies description.  I believe in the idea of peace and reconciliation with creation, and I see it happening in Bukidnon.  I feel it spreading, now that 25 people have been empowered by this Living Laudato Si’ experience.  Above all, I am hopeful and eager to let the seeds of change grow into fruit for a whole new world, full of the sweet aroma of peace.

Luke Henkel is a yoga instructor and a seminarian at the Society of the Divine Word, Chicago Province, USA, and joined the JCAP Living Laudato Si’ spirituality workshop for action held in Balay Laudato Si’ in Bendum, Bukidnon, Philippines from 29 May to 2 June 2018, along with other participants from Asia Pacific.  Luke came with the Ecology Ministry of the Archdiocese of Manila, where he spent some time as a volunteer.