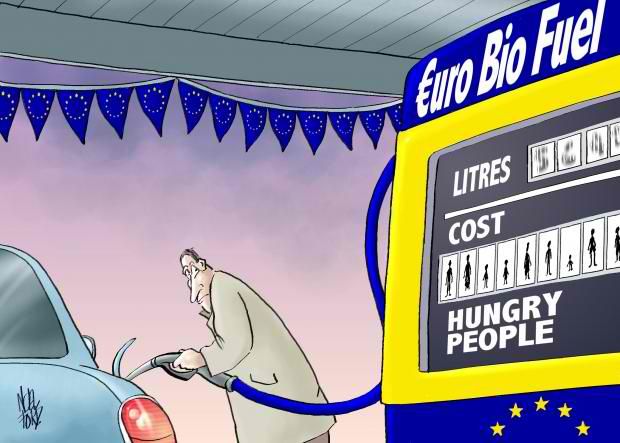 Discussion about the limited quantity of available oil stocks, and about the increased price of fossil fuels is nothing new, but the issue represents increasingly urgent challenges for the transport sector and for national economies.  It is similarly an important challenge for politicians to diversify fuel sources, so assuring the security of energy supplies.

In 2006, the European Commission (EC) presented a Strategy for Biofuels, which proposed that biofuels (sometimes called ‘agrofuels’ as ‘biofuels’ sounds deceptively healthy) could be used as an alternative fuel for transport.  The EC distinguished different types of biofuels.  Bioethanol is produced from sugar and cereal corps.  Biodiesel is made mainly from vegetable oils and used to replace diesel.  There is also a difference between ‘first-generation biofuel’ produced from food crops such as sugar, starch, and vegetable oils, and the ‘second-’ and ‘third-generation biofuels’ produced from feedstock, so that these are not competing directly with food and feed crops.  Examples are agricultural residues, wheat straw, municipal waste, non-food crops (i.e. miscanthus or elephant grass and short-rotation coppice), and algae.

Directive 2009/28/EC of the European Parliament and of the Council of 23 April 2009 on the promotion of the use of energy from renewable sources proposes a mandatory target of a 20% share of overall community energy consumption to be derived from renewable sources by 2020, and a mandatory minimum target of 10% to be achieved by all Member States for the share of biofuels to be used for petrol and diesel consumption by 2020: all this to be introduced in a cost-effective way.

But producing biofuels from agriculture causes immense damage, as indicated by Survival International, a non-governmental organization.  In their 2008 report, the group reported that the demand for biofuels destroys tribal peoples’ land and livelihoods and describes how palm oil, one of the most destructive crops used for biofuels, has affected millions of indigenous people in Malaysia, and millions more in Indonesia.  In these countries, over six million hectares of oil palm were planted, mostly on indigenous territory, to the extent that they are forced to leave the area.

But the problem is not only the palm oil.  Other crops used for biofuel such as sugar cane, soya, corn, manioc (cassava), and jatropha, forces indigenous tribes to leave the land as the government seizes land areas for biofuels.  Oxfam claims that 40% of the US maize harvest would be used to produce ethanol.

Biofuels also play an important role in driving up food prices.  A study from the World Bank shows that agricultural commodities such as sugar, corn, and oil seeds (as oil), that serve as the main biofuel feedstocks, would provoke 1% to 8% price increases in 2020 as compared to that of the baseline, due to the expansion of biofuels to meet the existing targets.

Recently, the European Commission re-thought its policy, according to Energy Commissioner Günther Oettinger.  The Commission is now proposing to moderate the target: of the 10% renewable energy target, the Member States may only count 5% from those biofuels taken from food crops.  The rest must be from wastes or agricultural residues, or from the use of renewable electricity in road and rail transport.  For ethical reasons, this aim would be much better.

Ms Jessica Nitschke is a team member of the Jesuit European Social Centre in Brussels, Belgium.

One thought on “Biofuels – a rethink among politics?”