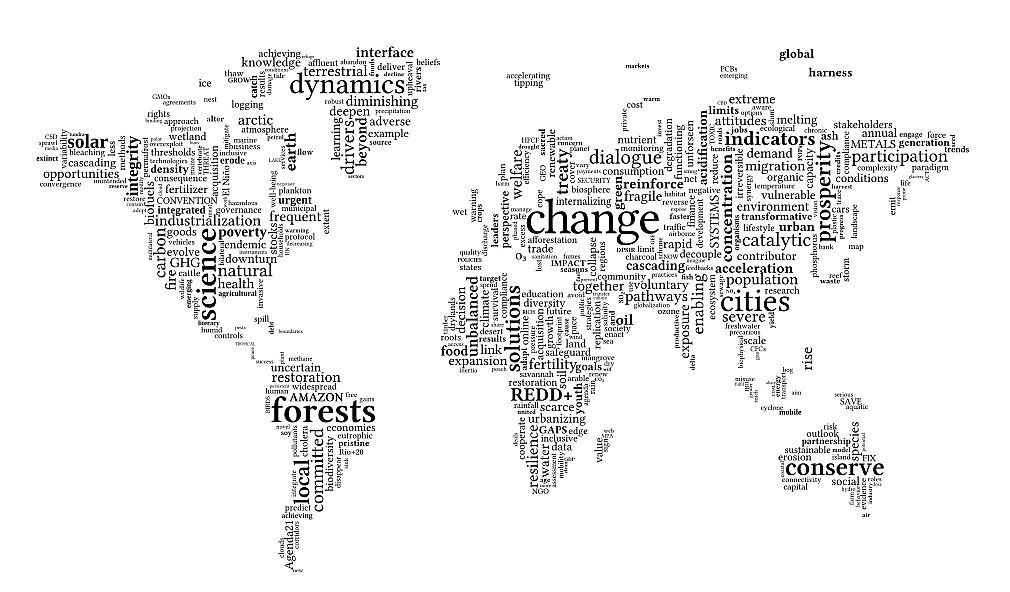 Several issues require longer-term cooperative efforts.  Our world has a human-generated environmental “cliff,” namely, climate change effects:  frequent weather extremes, oceans rising 3.2 millimeters per year, and carbon dioxide increasing at 2 ppm per year and expected to reach a catastrophic 650 ppm by 2050, or a 4oC temperature rise.  Europe is curbing its emissions on schedule and the US has cut carbon dioxide emissions for the last two years (closing one coal-fired power plant per week); still China opens one additional coal power plant per week and other Asian plants open as well.  Most disturbing and yet to be verified by the US Environmental Protection Agency is the rapid atmospheric rise of the far more potent greenhouse gas methane.  Industry reported leakage rates in fracking of gas in North America are most likely highly underestimated all while Europe refuses to introduce the hydrofracturing method.

Now let us turn to another area of concern.  The Pope in his annual message on peace on New Year’s Day said “it is alarming to see hotbeds of tension and conflict caused by growing instances of inequality between rich and poor, by the prevalence of a selfish and individualistic mindset which also finds expression in an unregulated financial capitalism.”

The Pope’s concern about globalization meshes with his equal concern about environmental dangers.  In this critical hour it is not sufficient for Jesuits to let this connection go in silence.  Excessive consumption of material goods primarily by the affluent nations leads to an insatiable addiction for more and more resources in competition with other consumers, and in this race to the top, affluence breeds insensitivity to the legitimate needs of others who are left behind.

The Pope further writes: “The predominant model of recent decades called for seeking maximum profit and consumption, on the basis of an individualistic and selfish mindset, aimed at considering individuals solely in terms of their ability to meet demands of competitiveness.”

If this mindset were solely among developed nations (principally in North America and Europe) as I wrote in the book The Contrasumers (Praeger Publishers, 1974), the Earth may sustain it grudgingly; if this way of thinking and acting expands to emerging and populous nations comprising half of the world’s population as is occurring in this century, the resource demands and accompanying pollution will exceed Earth’s carrying capacity and grave harm will start to appear.  The greed of the hotbeds that the Pope highlights in his peace message feeds on itself in an uncontrolled and dysfunctional economic system now in place, not only in those developed nations where the environmental crisis first showed itself, but now in China, India, and other parts of the emerging world.  Capitalism must not go unchallenged.  The Pope encourages peacemakers to cultivate a passion for the common good and social justice, and environmental concerns fit here.

Is it enough that our Society works principally at an apparent first level of eco-humility (seeing consumer wastefulness and our lack of simple living practice) and exposes the pollution problems afflicting the planet?  Certainly this approach has a history of some 40 years.  Further, is it enough that we work on local projects or regional problems (e.g. now my parish is developing a meditation garden including “edible” landscaping; we also work with groups installing solar energy systems)?  This second level of eco-humility (seeing that meaningful activities have their inherent imperfections when attempted) is not the last word for members of the Society, no matter how well functioning their institutions’ internal or outreach programs are.

We are called to a deeper third level of awareness, namely, immersion among the poor, and that includes acknowledging our addictiveness (as impoverished) to excessive consumer goods and our need for God to free us and our world from them.  Tackling this last level triggers opposition from defenders of the consumer-based status quo and from deniers of anthropogenic climate change.  Such clashes are expected as part of establishing the Kingdom of God.  However, uneasiness comes over those who are institutionally related and are uncomfortable with balancing of administration and prophetic activity.  No one likes to bite the hand that feeds them.

During the Great Depression, US President Franklin Roosevelt said the only thing to fear is fear itself.  Perhaps we ought to include failure to acknowledge one’s fears.  Stephen Rooney’s piece in a recent issue of Ecojesuit on linking climate change and moral judgments relates to a University of Oregon study of six reasons why climate change poses significant challenges to our moral judgment system.  In essence, the six (abstractness, blamelessness, guilt bias, optimistic bias, moral tribalism, and long-term results) seem, as Rooney suggests, incomplete.  The song composed by Peter Malagodi and Meladeego (occupiers of Wall Street) “Fear is the Weapon (fear them not)” addresses a deliberately induced issue that afflicts all of us to some degree during this recessionary period.

Is what we fear not only the consequence of our collective actions but what spawns rampant consumerism and its insatiable appetite for larger portions of the world’s resources?  The temptation is to acquire more, since what is possessed is not satisfying.  Does fear include more guns, police, and military weaponry and the ever-growing demand for more material security?  Does fear include the unspoken trepidation of people focused on their wants while ignoring needs of the world’s poor who lack essentials of life?  Is fear mixed with the greed of a dysfunctional economic system that is too big to fail and needed for daily business?  Is this fear unacknowledged, haunting us as addicted and consumer-oriented people with an insecure clientele who may forsake us if we engage in radical thinking?

Kevin Knobloch, President of the Union of Concerned Scientists (UCS) in the US, touches on this fear in a recent article he wrote for the autumn issue of Catalyst, the official magazine of UCS, titled “Standing Up to Anti-Science.”  Also in a recent issue of National Catholic Register, one of the responses to my call in their periodical regarding climate change as a pro-life issue was bullying, which has continued through a blizzard of emails.  In spring of last year I opposed the Institute for Theological Encounter with Science and Technology (the late Jesuit Bob Brungs’ creation) anti-anthropogenic climate-change stance, which resulted in strong responses by the deniers.  Naomi Oreskes and Erik Conway in a detailed book Merchants of Doubt precisely document the concerted effort by industry-oriented hacks to debunk the findings of climate scientists; they also show the media tendency to give equal weight to the doubters for the sake of controversy.

Jesuit environmentalists need courage to defend our Pope and his team who have received criticism from the so-called conservative wing of the Church.  One instance is in an article, “Beyond Their Expertise” in The Catholic World Report in December 2011.  Countering just such practical business folk may be a new demand to defend the Pope’s recent Christmas article in The Financial Times in which he says that “when Christians refuse to bow down before the false gods proposed today…it is because they are freed from the constraints of ideology and inspired by such a noble vision of human destiny that they cannot collude with anything that undermines it.”  Are we ready for defense?

These are critical times when Jesuits cannot remain silent.  We must do more than what other environmentalists do well, namely attend meetings, describe problem areas, and tweak the dysfunctional current system with albeit necessary renewable-energy and conservation-oriented solutions.  Nor are we green-tinged students writing essays for their teachers on pollution problems and locally based solutions — and these certainly have their place.  To be worth our Jesuit salt, we must use the Internet and perhaps teleconferencing (not international travel) to tackle longer-term problems, thus enhancing our prophetic role.

Recall that the American founding father, Ben Franklin, tried at both the Pennsylvania and the Federal Constitutional Conventions to limit wealth held by individuals; other delegates dismissed his wisdom as the ranting of an old man.  Would that in this age of multi-billionaires his limits had succeeded.  Such limitation is part of a package that includes pinpointing the financial and ecological crisis we face, sharing resources rather than becoming immersed in an affluent consumer-driven culture, recognizing our addictive behavior and need for God, taking steps to change, and having the courage to tell others where we as a people must go.  This is a tall order and will take much cooperation and discussion.  To pretend that we are satisfactorily green on the first two levels is simply not sufficient.  Let’s defend our green Pope as part of our Jesuit mission.

Al Fritsch, SJ is the Director of Earth Healing.