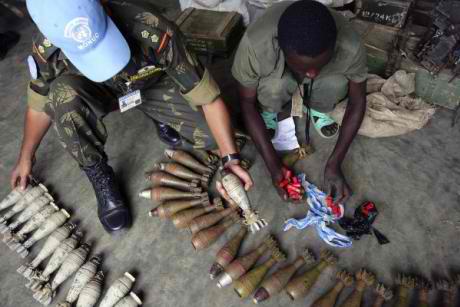 For over a decade, the UN Group of Experts on the Democratic Republic of Congo has been reporting on the connection between the minerals trade, armed conflict, and human rights violations. International solidarity groups and human rights activists have also been very active in addressing this link and proposing policy measures, in the Democratic Republic of Congo and elsewhere.

Colombia, the Central African Republic, Angola, Myanmar are frequently cited as conflict-ridden countries where revenues coming from the extraction and trade of natural resources are financing human rights abuses. Armed guerrillas, State security groups, and corrupt officials hiding behind opaque company ownership structures are financing their criminal activities through the illegal exploitation of natural resources that end up as manufactured products in the hands of industries, consumers and citizens. The global nature of supply chains implies that natural resources sourced from conflict-areas can, directly and indirectly, contribute to cause harm and havoc.

The better understanding of the links between natural resources and conflict and the growing research-based evidence of those links are building a consensus in favour of a better international and European regulation on responsible sourcing of minerals and natural resources.

However, only after a specific section (1502) on conflict minerals of the US financial reform legislation, commonly known as the Dodd-Frank Act, was passed in July 2010, companies sourcing from Central Africa started to take a closer look at what was going on in their supply chains.

In spite of the many weaknesses and uncertainties regarding the implementation aforementioned law and other regional and private initiatives, European institutions, business, and citizens must learn from the experience and push for legislation that, at minimum, meets international standards endorsed by the UN and the Organisation for Economic Co-operation and Development (OECD), such as its Guidelines for multinational enterprises, and also reflects the principles contained in the EU’s Corporate Social Responsibility strategy.

On 5 March 2014, the European Commission published a draft of such legislation. Unfortunately, its most controversial feature is that it does not require legal compliance, setting up a voluntary system for European companies to conduct Due Diligence on their supply chains and, thus, failing to fully regulate a market that currently represents 25 per cent of the global trade in conflict minerals and 15 per cent in gold.

Two positive features of the proposal are its global geographical scope as it does not confine itself to Central Africa and its use of public procurement as an incentive for companies to opt-in.

According to the European Commission press release, the proposed integrated European Union (EU) approach intends to stop profits from trading minerals to fund armed conflicts, acknowledging the need for a responsible trading strategy for minerals from conflict zones. With the proposed package of measures, armed groups in conflict zones will find it more difficult to finance their activities through the mining and trading of minerals. Companies are encouraged to source minerals through legitimate trading channels.

Catherine Ashton, the High Representative of the EU for Foreign Affairs and Security Policy, and EU Trade Commissioner Karel De Gucht said, “We are committed to preventing international trade in minerals from intensifying or perpetuating conflict. (This) initiative on conflict minerals will help trade to work for peace, for communities and for prosperity in areas around the globe affected by armed conflict. It is a first and timely contribution from the EU to support a consensus reached by business, civil society and governments in OECD countries to help communities benefit from their natural resources.”

Alicia Aleman Arrastio is a research and advocacy officer at ALBOAN Foundation.