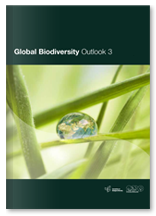 The general trends of the worldwide ecosystem degradation are commonly well-known for long. Among the most recent studies however, two documentations released on the occasion of the UN’s International Year of Biodiversity 2010 deliver new and mostly alarming figures on the real extent of the world’s biodiversity losses. And for the first time ever, the economic and monetary values of Earth’s biological infrastructure and the manifold services it delivers for human welfare are taken into account within a comprehensive approach.

Biodiversity, defined by the Convention of Biological Diversity (CBD) as “diversity within species, between species and of ecosystems,” is indeed at risk, since the IUCN Red List of threatened species, as well as the extinction rates, continuously grow and 38 per cent of all species remain endangered.

According to the Third Global Biodiversity Outlook (pdf), recently published by the CBD Secretariat, rapid degradation turns almost all environment indicators into a negative trend, and many are in decline exponentially. The study stresses particularly the high risk of dramatic biodiversity loss and accompanying degradation in that ecosystems are pushed beyond certain tipping points: thresholds which turn a process of gradual losses into an almost irreversible destruction.

The constant build-up of chemicals from agricultural fertilizers for example could shift inland freshwater ecosystems at a certain point into a long-term eutrophic state. Declining fish availability and reduced food security would be the consequences. Once a tipping point is passed, it would be hardly possible to regenerate the ecosystem. The authors describe 15 of such tipping points with long-term impact, such as the dieback of the southern and southeastern Amazon forest. “The poor would face the earliest and most severe impacts of such changes, but ultimately all societies and communities would suffer,” the study argues.

Even more public attention might be drawn on the status of biodiversity by a new study on the Economics of Ecosystems and Biodiversity (TEEB). TEEB is an analysis launched by the UNEP, European Commission and other international organizations to raise awareness on the growing costs of environmental degradation.

TEEB brings together numerous analysis and reports from different research centres worldwide. Instead of attempting to estimate the total value of ecosystems, TEEB’s valuation is principally based on an assessment of the consequences of changes resulting from alternative management options.

With this approach, the synthesis report can show that halving deforestation rates by 2030 would reduce global greenhouse gas emissions by 1.5 to 2.7 GT CO2 per year, thereby avoiding damages from climate change estimated at more than US$ 3.7 trillion.

Another example is Hawaii’s 166,000 hectares of coral reefs, which provide ecosystem services such as fisheries, tourism and natural protection against wave erosion, generate net benefits of US$ 360 million per year. In Switzerland, beekeeping creates proceeds of US$ 213 million annually, TEEB discovered.

The authors admit however that not all biodiversity values can be reliably estimated using existing methods. The study is just a first step to design and to set up market-based schemes. The benefits of biodiversity, and the costs of its loss, should be reflected within economic systems and markets. The authors’ argument is that “the re-structuring of economies and financial systems following the global recession provides an opportunity for such changes to be made.”