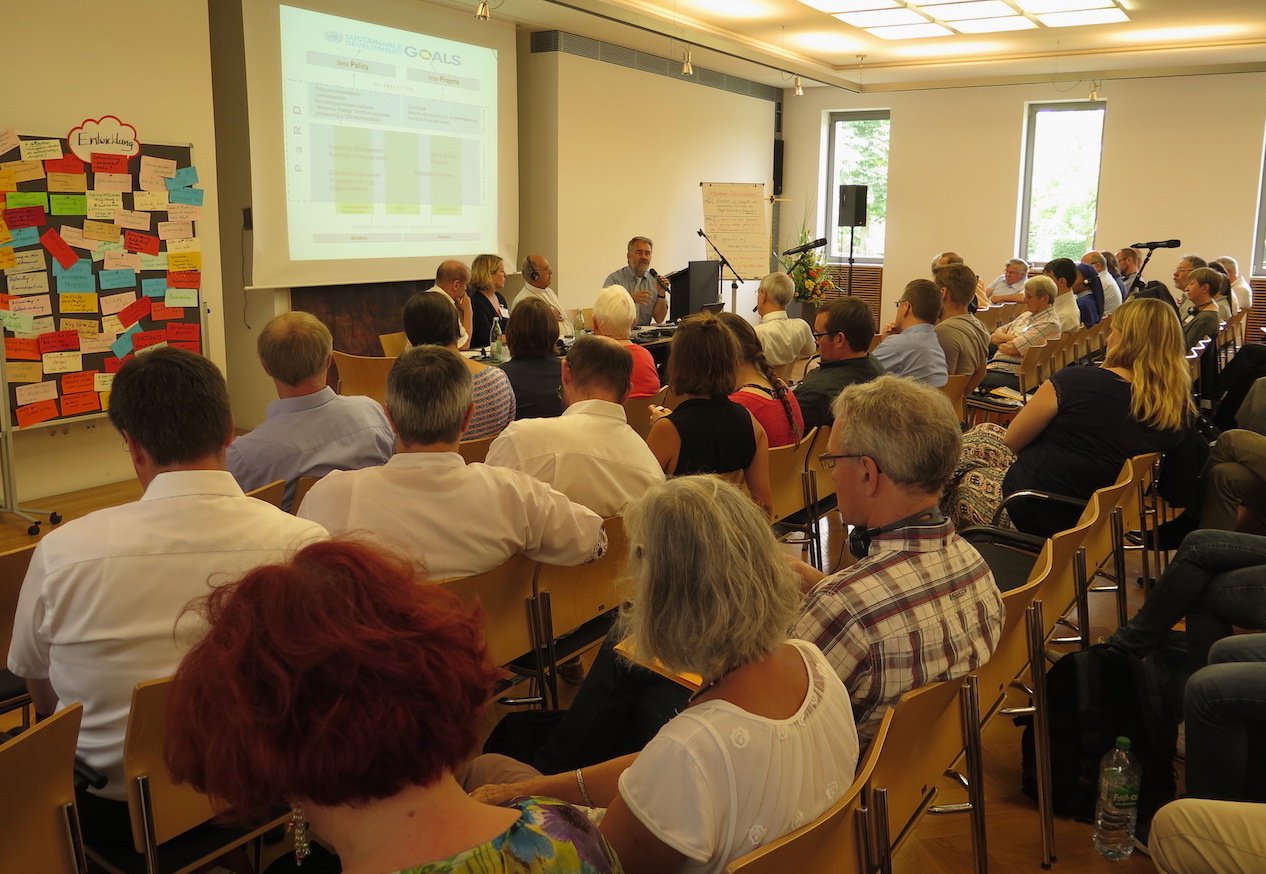 People living at the margins of the world share a hope that sustains their communities despite the complexities of today’s world, which generally exclude them and many others who are economically poor.  This hope is a powerful motivating force that often comes from a shared faith and enables marginalized communities to take action.  Development assistance that traditionally uses a secular approach is increasingly including faith-based organizations (FBOs) and religious actors in broader collaboration for change.

During the World Church and Mission 2017 annual meeting on “Religion and Development” in Würzburg, Germany last month, the discussions spoke a great deal about compassion and commitment of people who work at the edge and how the work can be very rewarding in terms of experiencing human development.  In many of these situations, those who first respond to the need come from a religious institute or faith organization.  At times, it is a community hope borne out of a shared faith that strengthens and enables the changes sought.

From an environmental standpoint, Dr Azza Karam, senior advisor on culture and social development to the UN Population Fund (UNFPA), discussed the Sustainable Development Goals, highlighting how the need to reimagine global relations to actively and systematically include religion in developmental outreach is important in today’s world of political and social strife.  Even the World Bank acknowledges it cannot hope to eradicate poverty unless it engages religious leaders and FBOs.

Sister Alison Munro, from the South African Catholic Bishops’ Conference (SACBC) AIDS Office in Pretoria, South Africa, shared how the Catholic Church responded to HIV and AIDS at the SACBC level , illustrating the sort of collaboration that works.  Her story told of the pioneering role of the Church in moving for greater funding from the South African government and its Department of Health at a time when HIV and AIDS was on the rise and anti-retroviral treatment was not available publicly.  Dioceses and parishes collaborated with the schools and sub-district government units and continue to work together to deliver services to marginalized communities.

The theme of “Religion and Development – Foundation, Opportunities, and Challenges” facilitated by the German Bishops’ Conference was as surprising as it was far reaching in its participation.  The dialogue has a refreshing vitality and is growing in a healthy, inclusive, and collaborative way that now involves the UN and the World Bank.  In this meeting, the UNFPA, GIZ (the German development agency), Germanwatch, and around 140 diocesan and church-related organizations engaged.

While many FBOs are able to direct attention at basic social inequalities, they also are challenged to deal internally with some religious ideologies that form part of the response.  Religion is part of culture and it does not help if religion is “siloed” in the efforts to support human development.  The effort is not to secularize faith-based organizations but to accept differences and fight inequalities.  The importance of seeing greater dialogue and understanding how for example Islam can contribute to human rights and basic development is essential.  The area of present conflict in Marawi, Lanao del Sur in western Mindanao, Philippines, was acknowledged as a call for greater dialogue to achieve broader peace.

Christoph Bals, policy director of Germanwatch, a non-profit, non-government organization based in Bonn, Germany, talked about climate and agriculture in a pluralistic society as a focus of their work and how Laudato Si’ is a document that he can refer to in their work, given its use of both science and religion while being open to all of humanity.

“Laudato Si’ presents the criticism of unbridled globalization that has led to a suicidal crisis and that through its teachings, we can try to find solutions,” he said.  It addresses everyone and is a direct conversation.  When guidelines are presented in the document, these are not prescriptive but rather each one is set as a dialogue.  Dialogue is spoken of 23 times, not dogma.  Pope Francis talks about the basic problem of unlimited growth (LS 106) and which cannot be used as a justification to turn everything into money.  There is also fundamental criticism of man as possessor of nature (LS 200) and that any technical solution that science claims to offer will be powerless in solving the serious global problems “if humanity loses its compass, if we lose sight of the great motivations which make it possible for us to live in harmony, to make sacrifices, and to treat others well.”

Ulrich Nitschke, head of the sector program values for religion and development at GIZ and reporting for Dr Bernhard Felmberg, Secretary at the Federal Ministry for Economic Cooperation and Development in Berlin, spoke of the need to enhance dialogue and partnership with religious organizations and the positive experiences of directly engaging with religious organizations, and cautioned against the secularization of the relations.  Various pilot projects in Africa helped GIZ understand the importance of such partnerships.  By improving religious literacy, development literacy can be improved, and by including religion as a factor in development, it broadens the analytical basis and determination of next steps.

Archbishop Pedro Ricardo Barreto Jimeno, SJ of Huancayo, Peru spoke of the work of Red Eclesial PanAmazonica or REPAM, of which he is vice president, and how the church seeks to accompany indigenous communities in the Amazonia in the care for their home and the health of the world.  Archbishop Barreto spoke of integral human development that refers to the whole person as a dynamic process, a process of life that grows and where all people grow to a more just life.  Integral also means that all can contribute.  He shared that technocracy dominates through politics and that the market cannot guarantee human development, and instead called for universal fraternity or solidarity.

From the program development side of responding to basic human needs and creating greater opportunity for others, all acknowledge the importance of the human spirit and the will of those seeking to improve their lives as essential in the bottom-up process of change.  Culture and religion are occasions of great depth and hope in the human struggle for survival and to live life to the full.  Culture and religion are also sources of great compassion and creativity, and when able to collaborate in diversity, can achieve many of the sustainability goals sought today for all.