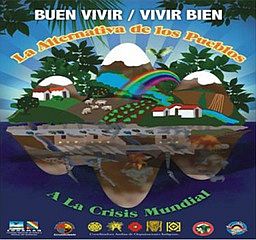 The concept of buen vivir was discussed from the perspective of the youth as social actors.  It is also part of Andean culture.  This term can be used in working with the youth and have a positive impact on their lives, helping them to rethink their rights, and the impact on environmental concerns.

The activity began with a young man named Bruno who spoke about several aspects of a possible youth culture, followed by Fr Líbano, SJ who addressed different characteristics of youth people, and offered different perspectives.  Another speaker was Ms. Paula from the National Youth Council who addressed the issue of rights and public policies for youth.  Then Mr. Berg (from the Casa de la Juventud) reported the progress and challenges of the campaign Young people want to live, held since 2002.  He denounced the violence experienced by young people and raised awareness about the high rates of crimes whose victims are the youth and teenagers.  This campaign which began in the State of Goiás is now in all nationwide.  In the end, there were two circular dances to thanks giving Mother Earth and with reference to indigenous peoples, and a representation of youth of Fe y Alegría from Espirito Santo, who want to preserve regional culture through dance and musical instruments.

There were 60 people from different parts of Brazil and several Jesuits and partners from Latin America and Europe who were in Rio for the meeting of social centers of Latin America as well as to attend the summit of Rio +20. The activity that took place in Flamengo Park,  the area of Rio where we celebrated the People’s Summit, was surrounded by trees and overlooking the sea and that made the event even more special.

Participants appreciated the activity and stressed the need to respond to these issues and recognized the importance of working with young people, especially in this period of severe economic crises and environmental and social change.  It was also acknowledged that further joint activities among Jesuit institutions in Brazil are critical.  In the end, Mr Renato Costa, the National Coordinator of Public Action of Fe y Alegría highlighted: “We must be united to attain Buen Vivir of the youth.  Jesuit institutions must walk together in fellowship; we can make substantial changes in the lives of young people and in the environment that we are part.”