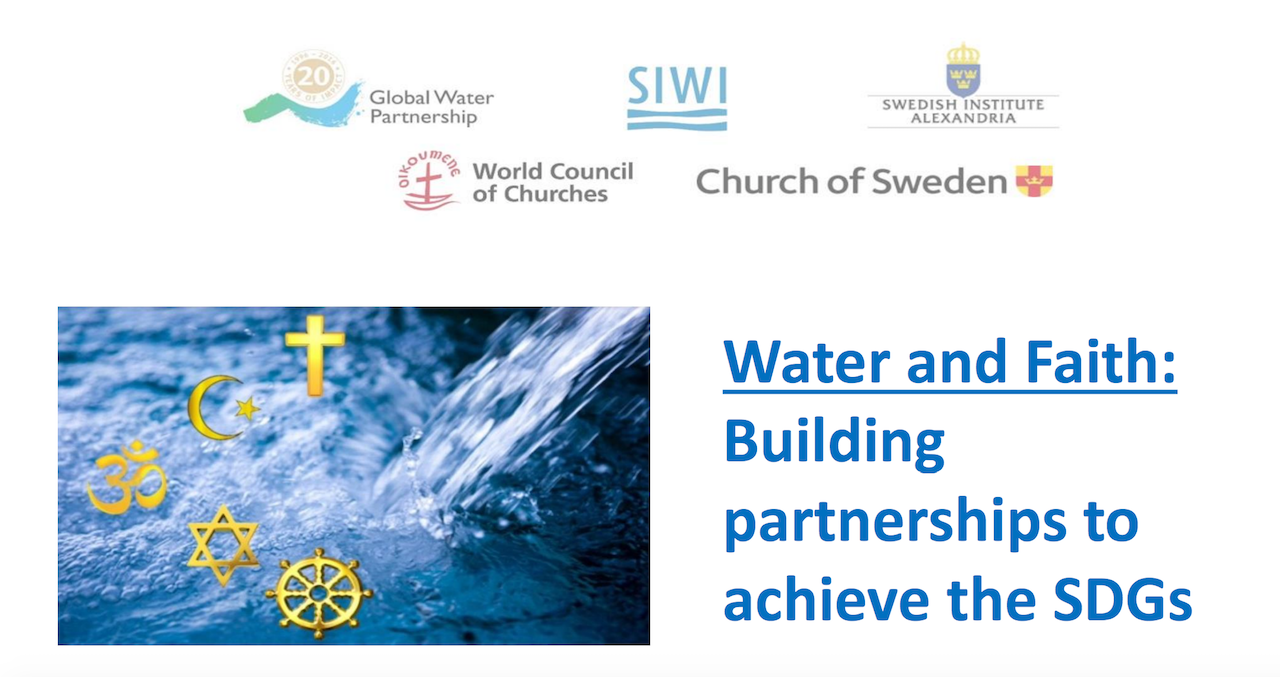 There is growing interest in the role of faith-based organizations (FBOs) in moving Sustainable Development Goals (SDGs) forward, catalyzing collaboration, building cultural bridges, and activating their extensive institutional networks.  During the 2017 Stockholm World Water Week, three different events dealing with the faith-water nexus were held for the first time in its 27 years of history.

This conversation was stimulated by the success of the 2016 meeting with religious leaders where the Global Water Partnership, the Stockholm International Water Institute, and the Church of Sweden convened a panel on Water and Faiths: Faith Based Organizations contributing to the SDGs.

The first event, Protection of the Sacred: Wastewater management and indigenous realities, reflected on the way indigenous, marginalized communities deal with access to water in different parts of the world and how they have developed strategies both to denounce the injustice associated with poor access to water and to be active stakeholders in decision-making processes.

A second event, Religious jurisprudence related to reuse of water, presented the perspectives on water from the three largest world religions – Muslim, Hindu, and Christian – engaging participants in a fruitful dialogue, finding commonalities, and identifying areas of possible inter-faith collaboration.

Finally, the second consecutive session of Water and Faith: Building partnerships to achieve the SDGs  was also held.  Organized by the World Council of Churches, Church of Sweden, Global Water Partnership, Stockholm International Water Institute, and the Swedish Institute of Alexandria, the speakers insisted on the importance of bridging the gap between FBOs and the water interest groups.

François Brikké from the Global Water Partnership said in his introductory remarks that “we need everyone to work together, also FBOs.”  Obvious as it may seem, this has not always been the case.

Peter Weiderud, director of the Swedish Institute of Alexandria, pointed out that “international diplomacy, financial institutions and development agencies have been influenced by the secular, Western look at religion as a private issue.  However, religion is not private, it involves morals, rituals, identity and community.  And all this is public and political.”

Dinesh Suna, coordinator of the Ecumenical Water Network of the World Council of Churches, criticized the existing gap between faith communities and water interest groups, acknowledging that 8 in 10 people identify as religious.  And, even more important, “religions have a wide network that often remains active when other institutions fail or leave.”

In a similar vein, Adam Russell Taylor, an ordained Baptist pastor and Lead for the Faith-Based Initiative of The World Bank Group, insisted on “the need to transcend the dividing lines and silos in the development agenda…We can’t forget that water is a cross-cutting development issue, one that directly touches many, if not all, SDGs.  And water is also central across religions.”  For over 80% of the world’s population, religion significantly shapes their worldview, values and behavior.  “Religion plays a profound role in development.  The question is how, not whether, we relate to FBOs..the SDGs will fail unless we engage FBOs.”

According to Taylor, FBOs are crucial players in achieving SDG6 because they can make five key contributions:

First, they can capture the moral imagination of people, speaking about the importance of water in sacred spaces.

Second, FBOs convey a great deal of moral influence through their educational, pastoral and sanitary networks that can influence behavior on the importance of reusing and reducing the amount of water being used.

Third, FBOs, unlike other actors and stakeholders, can and should denounce the injustice and immorality associated to the lack of water and sanitation.

Fourth, the moral authority of religious leaders can hold politicians into account.  Since the SDGs and the Paris Climate accord are non-binding agreements, the role of FBOs could prove critical in pushing them forward.

Fifth, FBOs can foster a sense of moral urgency and catalyze action in a unique way.  They have done it before – from India to South Africa to the US –  and they can do it again.