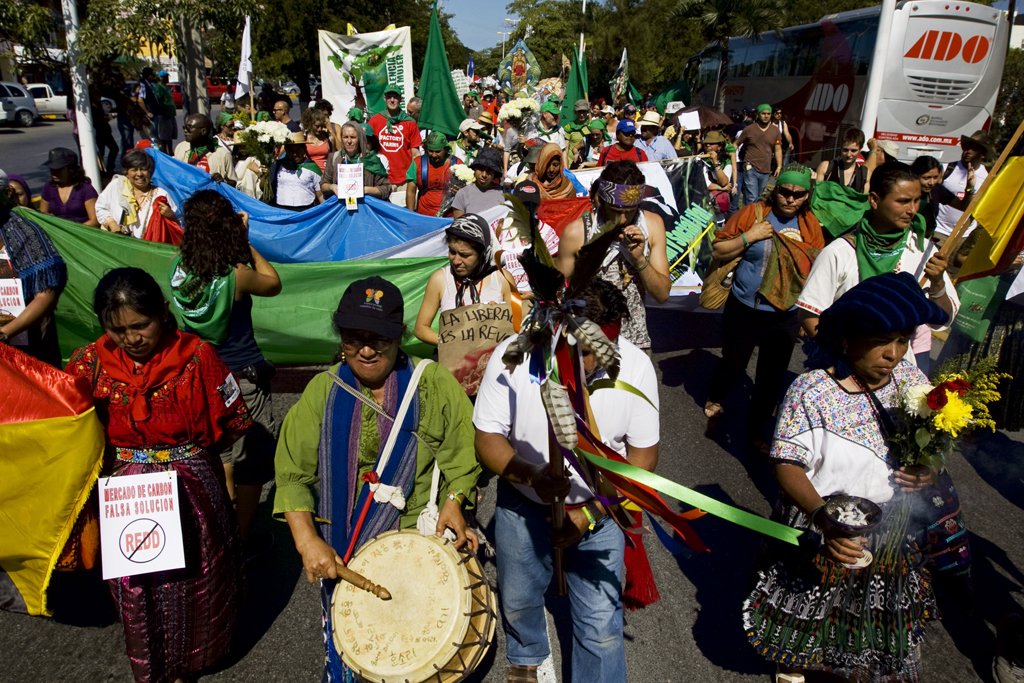 Ms Ribeiro shares with us her reflections and frustrations in the recently concluded climate change discussions in Cancun, Mexico. She is a researcher at the National University of Mexico and at the international network ETC (an action group on erosion, technology, and concentration). She is also an advisor to Red de Defensa del Maiz (Advocacy Network of the Corn).

The official results of COP 16 were worse than the previous year in Copenhagen in two fundamental aspects: on the decisions taken, and the dominant discourse released by general media, governments and big environmental NGOs seeking to convince us that at least they have moved a few steps, without naming that we are in front of the abyss.

There was really no resolution to address climate change, further weakening existing efforts. What emerged were limited solutions that continue to support market mechanisms that will create more greenhouse gases and more speculation.

However, popular mobilization against the summit by organizations such as Via Campesina and other groups, have not lost their sense of reality about what is becoming absurd and what we need to do.

In Copenhagen, the failure of the talks was clear and the attempted coup of the most polluting countries to impose their will was unsuccessful. In Cancun, there was an imposition and even increased. The debated documents failed at Copenhagen; in Cancun, the document has the support of almost all governments around the world, with the exception of Bolivia, the only country that stood by the principles and demanded responses to address the climate crisis.

The summit also marked a break of the Bolivarian Alliance for the Peoples of Our America (Alianza Bolivariana para los Pueblos de Nuestra América or ALBA), as Claudia Salerno, the delegate from Venezuela, accompanied in part by other ALBA member countries, actively negotiated outside the officially stated agendas and the multilateral channels.

Faced with the protest from Bolivia that it was not being a democratic discussion and that there was no consensus, Salerno suggested to the Mexican presidency that the COP would “take note” of the discrepancy with Bolivia, rather than moving for real negotiations requiring openness and transparency.

The submissive position of Venezuela is in stark contrast to the whole speech of Hugo Chavez and Evo Morales in Copenhagen, where they said that capitalism was at the root of the climate crisis and that they would not allow any reinforcement of the United States and other northern countries’ positions. They also said that there was a need to address the real causes of the climate crisis due to the grave impact for the people and for the planet. In Cancun, by contrast, Venezuela was key to the passage of what Hugo and Chavez rejected the previous year.

If Venezuela’s case is extreme, it was also interesting that other developing countries, such as those grouped in the G-77 participated in the fraud. Both stated that the important thing was to preserve the space for negotiations, which was under deep crisis because of the different perspectives between victims and perpetrators.

Therefore they accepted the vague promise of a future discussion process, although what was approved in the same act is contrary to what the G-77 has been fighting for years (requiring binding reduction commitments, common but differentiated responsibilities between North and South, acknowledging the historical responsibility of those who caused the climate crisis, intellectual property issues in technology and other items).

Japan, Australia, the United States and other big polluting countries, made it clear that they will not sign any binding document even in the future. The United States stated that Cancun was a success for their particular interests.

The spirit of the United Nations appeared at some concrete points. Some examples were the endorsement of the new market mechanisms such as carbon capture and storage (CCS) in geological formations that have huge impacts and the REDD programs. The REDD programs were approved in their most extreme models to allow de facto privatization of forests and threatening communities as there seems to be an elimination of any discussion on indigenous rights and safeguarding biodiversity. Environmental NGOs and indigenous peoples, who claimed to defend the market mechanism to protect forests, worked in the most benign interpretation as useful pawns to corporations and speculators. The investor and speculator George Soros celebrated the adoption of REDD as a welcome stimulus to this market.

This Cancun syndrome that is sickening its victims (paraphrasing the Stockholm syndrome, where hostages fall in love with the kidnappers) is possible because a number of countries in the South have economically grown and developed using the same model of exploiting oil resources. This growth model has led to the climate crisis and these countries are now big polluters also and their governments do not want real reduction commitments.

Many countries also converged with northern governments and transnational companies pushing for a new green-based capitalism, one that turns nature and its functions into a merchandise, giving a price to everything but not valuing the ecological services. Biodiversity and forests mostly in the South can be put up for sale through programs such as REDD and others.

At the opposite end, La Via Campesina (International Peasant Movement) and the Asamblea Nacional de Afectados Ambientales and other organizations continue to advocate for real solutions and for responses to the real causes of the climate crisis. The outlook is bleak but the grassroots movements are not giving up.