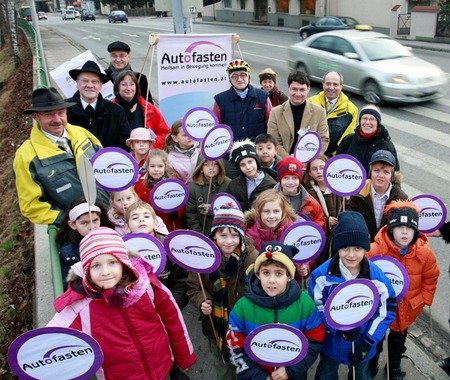 Renunciation, reconciliation and healing are core issues of the preparatory weeks on the road to Easter. Every year again, Lent invites Christians to conversion and calls us to examine even deep-rooted personal habits. The perspective on Easter thereby opens the way for a new discernment among what is necessary and what is dispensable. And by means of this interest, Lent is also a challenge to creativity.

The Christian churches in Austria have proposed their own answer towards this vocation. Every year on Ash Wednesday numerous parishes encourage Car Fasting or Autofasten in German, an ecumenical Lent campaign introduced in 2005 by adapting a similar model from local initiatives in Germany.

In contrast to the situation in Germany, however, the initiators in Austria managed within a few years to implement their endeavour successfully. Throughout the land, more than 6,000 persons every year accept the invitation to leave their cars behind, to actively reduce emissions, and cut energy consumption. The numbers are still increasing. Car Fasting is an attempt to use the time between Ash Wednesday and Easter for an assessment of people’s habits of mobility, and to discover available alternatives, e.g. rail, bus, bike, feet or car-pooling.

“Most of our participants just follow their environmental awareness when they decide to participate,” says Hemma Opis-Pieber, the environment delegate of the Diocese of Graz, Styria region. Despite its impressive alpine landscape, its nature reservoirs and its high recreational value, Styria is affected by a surprisingly high air pollution. In many families, children suffer asthma. More and more people are therefore seeking their personal contribution against increasing emissions, fine dust stress and daily traffic jams. “Many are willing to check and to reform their habits, but what they need is a sort of community that sets incentives and co-ordinates related activities. And our idea is very simple,“ Ms. Opis-Pieber resumes.

Initiated by the churches, the campaign has been long since crossed institutional borders. Autofasten is supported by local and regional authorities, by traffic associations and environmental groups. “Sometimes people ask: I am not a member of a church, but I like the idea. Can I participate anyway?” Ms. Opis-Pieber says, laughing.

Of course they can. Everybody is invited and even those who do not possess a car are called to join the campaign and to get involved as a volunteer by supporting the advertisement, distributing leaflets or sending petitions to the local and regional authorities, appealing for a more environment-friendly urban development and for improvements to the public transport systems. The initiators of Autofasten insist that their venture is not only about immediate car use, but principally about consciousness, awareness and a holistic approach to redefine our relationship towards nature.

Surprisingly rare are the conflicts which arise from Autofasten. Some people who live in the countryside and feel dependent on their car perceive the campaign as a threat to their basic necessities. Others reject any link between their faith and their choice of transport means. “But in general, the discussions are peaceful and very constructive,” states Ms. Opis-Pieber. “After 40 days of car fasting, many participants are ready to renounce, at least in part, their car use even beyond Lent and in the long term. ” In many cases indeed, Autofasten is the entry into a less CO2-intensive life, the initiators know. And the pressure to improve public transport has intensified: a new suburban train system in the region of Graz is a direct result of the increase of public transport users, due to the car-free Lent engagement.

What about other countries and cross-border co-operations? Ms. Opis-Pieber is cautious: “Recent inquiries came from the US and from Slovenia, but all are far from being realised.” Austria remains a front runner.

Have Jesuits ever participated in Autofasten? “Not that I know of. Not yet.” But Ms. Opis-Pieber has learned over the years, that many people participate silently, without letting anybody know.

One thought on “Car fasting: Austria’s Green Lent campaign points the way ahead”