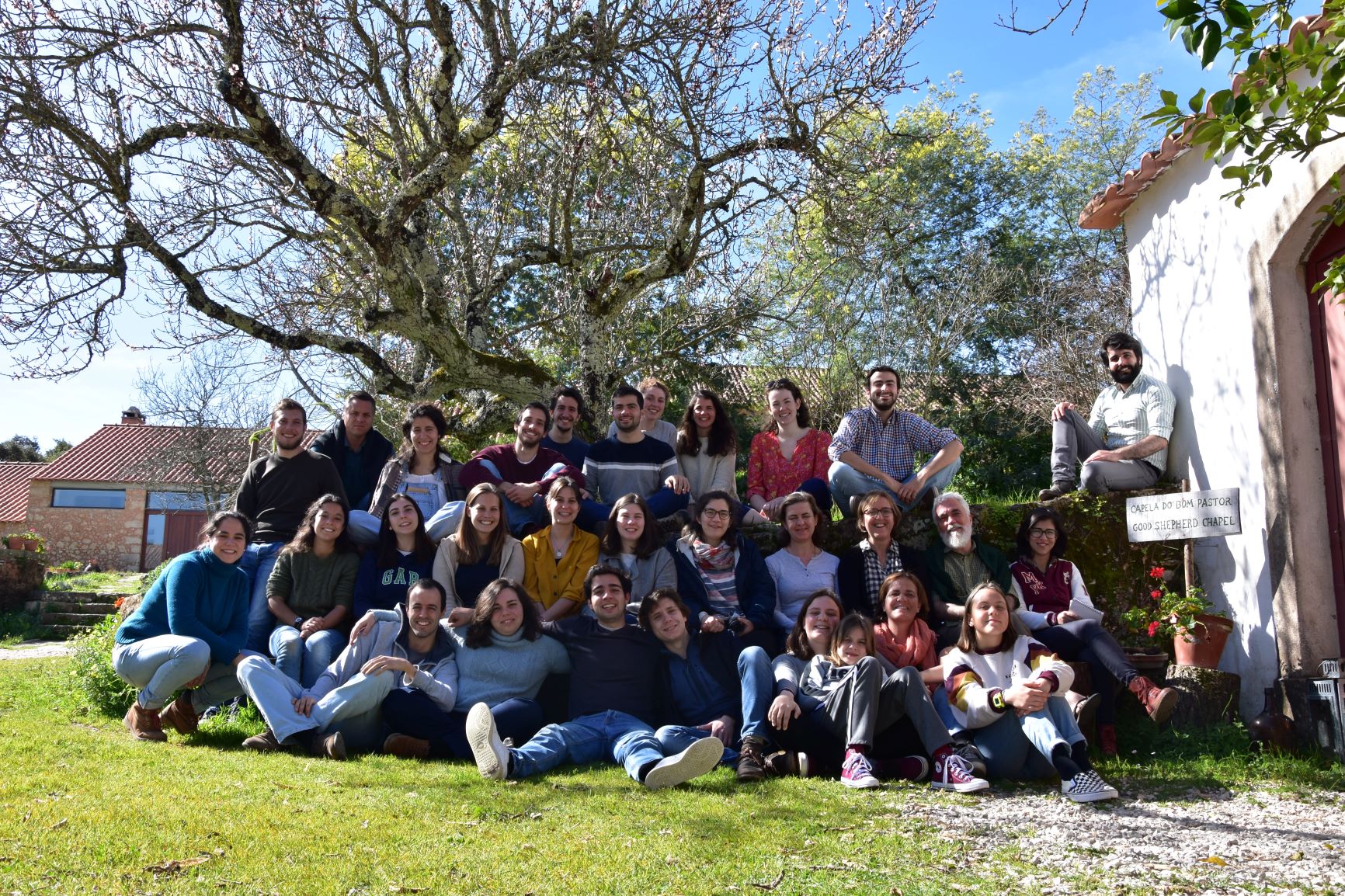 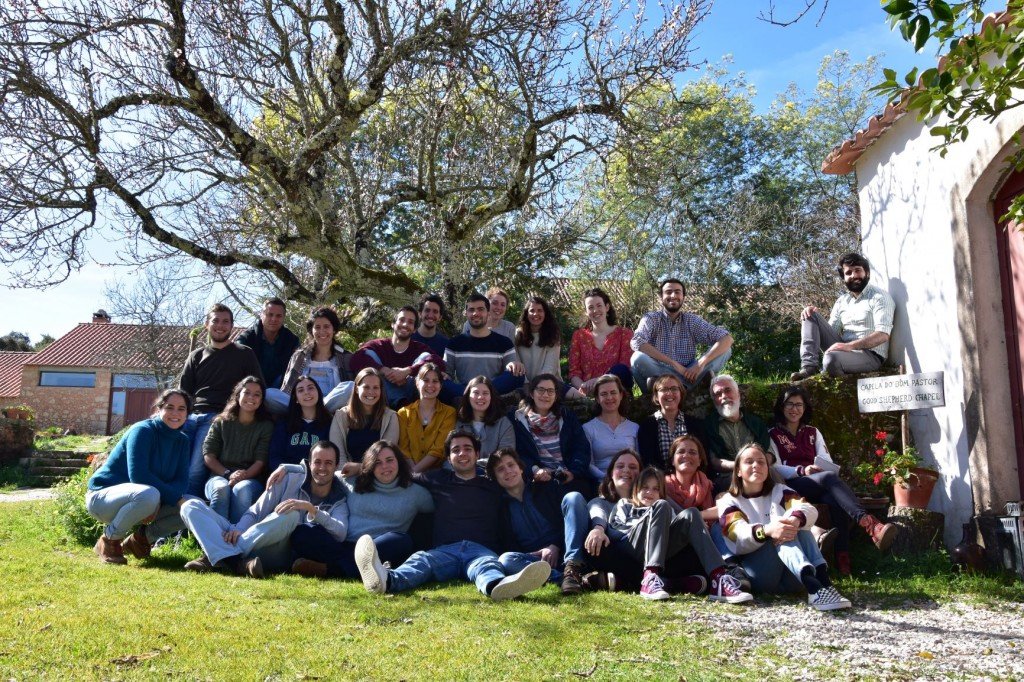 Casa Velha is a 67-hectare farm in Vale Travesso, Ourém municipality near Fatima in Portugal.  Some Atravessados members – a group of 18 young people who volunteer there once a month – prepare to plant some leeks, lettuces, zucchinis, cabbages. “You can start with the lettuces. Leave, more or less, five inches between each foot,” says Margarida Alvim, head of the Associação Casa Velha – Ecologia e Espiritualidade.

The project, created in 2012, aims to make the farm “a meeting place with nature, with the others and with God” and is deeply marked by Ignatian spirituality. “We owe the Spiritual Exercises the discernment to go know what we were doing.”

In the same area of the vegetable garden, but a little lower, 10 Atravessados are focused on cutting the canebrake, which, in recent times, has hindered the passage of sunlight. Many had never worked in the field before they met Casa Velha.

That’s the case of Madalena Meneses, 26 years old.  “I came, for the first time, in 2015 and gradually I realized that spirituality is intrinsically linked to ecology, in this sense of relationship with the earth. Here everything is integrated, everything makes sense.” She adds, “It’s very beautiful to realize that there is a time to prune, another time to harvest.” The weekends, once a month in Vale Travesso, also helped her to discover community life. “In Atravessados, there are people from all over Portugal. We did not gather because we were already friends – it’s true that, over time, friendship has arisen – but what really binds us is the Casa Velha experience, the praying and this desire to care,” says Madalena, who is a graduate of General Studies.

Among the group that is cutting canes is also Peter Walpole, the Irish Jesuit who is responsible for Ecojesuit, the network of Jesuits linked to ecology and sustainability. “When I see them here, I am sure that they appreciate the simple things in life and that what they received from Casa Velha will have a reflection on their daily lives. It will be something from which they will continue to live,” says the priest, who lives in the Philippines and is passing through Portugal.

Throughout the weekend, and beyond working on the land, the Atravessados have time prayer and mission time. During that Saturday afternoon in February, they were distributed between the nursing home in Ourém, some visits to the most isolated population, receiving local children on the property, and some work to take care of the house.

João Líbano Monteiro, 29 years old, spent the afternoon in the garden, finishing the morning planting.  “Casa Velha had the ability to reconnect me with God when I was away from Him. It also allowed me to discover the Ignatian spirituality,” said the engineer, who has been attending the farm for four years.  “Coming here once a month is an opportunity to be in tune with God and with others. Here I experience a healthier rhythm of life, which then, in everyday life, serves as a pendulum and helps me to see if I am living too fast.” And he explained, “The ecological aspect of Casa Velha works completely organic. It’s not an activist type.”

The Atravessados are just one of the groups that Casa Velha receives. Throughout the year, the Alvim family property hosts holiday camps, Spiritual Exercises, retreats (“Praying in the Field” and “Pruning and Spirituality”, for example), visits to schools and nursing homes.

“Every month we receive seniors who participate in activities, either to select tea plants or to spend the afternoon singing around the fireplace,” says Margarida Alvim. “With schools, for example, we developed a project that allowed local producers to start supplying the group canteen. They are small changes that are part of a more structural change and are linked to the conversion of each one,” she adds. In one of the spaces of Casa Velha, which is accessed by a long road surrounded by cork oaks, a very common species in the region, several Lisbon groups planted trees. “This week I sent a photo to a teacher so the students can keep up with the growth.”

Even though it is open to all, the Casa Velha farm remains a private area – it has been in the family of Margarida Alvim since 1906. For much of the 20thcentury, it had an important economic and social role in the region – the average properties in the county of Ourém is one hectare; Casa Velha has 67.

“In the 1990s, there was a decline and we began to feel the challenge of caring. We are part of creation and, that way, we are called to play a role in this,” she says.  Through the years, and with the discernment that she was doing through the Spiritual Exercises, Margarida realized that her life was passing through the House. “Ten years ago, we began to discover this site as a place for human, personal and community development,” says Margarida, adding that in 2009 she moved back from Lisbon to Vale Travesso. “I often say that Casa Velha is a great Spiritual Exercise.”

The space began to welcome groups on a regular basis in 2010, two years before the constitution of the Casa Velha Association – Ecology and Spirituality, which has a representative of the Society of Jesus and a representative of the Handmaids of the Sacred Heart of Jesus. With the increasing demand, the farm was also adapted and rebuilt. “The first work was the transformation of the garage into the Chapel of the Good Shepherd,” she remembers. Other adaptations followed it – the firewood houses gave rise to bathrooms and the ancient haystack has become a hostel. In 2015, they opened an agrotourism, located in the old corrals. “There was a concern for sustainability and we applied to European funds to carry out the works.”

In that year, the publication of the encyclical Laudato Si’ was the “confirmation of the Casa Velha mission.”  The 2015 document on the care for the common home would cement the link between ecology and spirituality, which years before named the project. “Pope Francis presents the environmental issue as a fundamental social issue.  Caring for the territory is caring for the people,” she said. “After that, we were searched to speak, from what we were already practicing, about the encyclical at conferences and round tables. It was a very special moment,” says Margarida Alvim.

Beyond the moments to meet with God and with others, Casa Velha also ends up fostering the discovery of gifts and talents. Madalena Meneses says that it was there that she discovered the delight for analog photography, to which she has dedicated herself more and more – she wants to invest professionally in the area. “Here, I feel so found and cared for that I want to take this to others.”

This article was originally published in Portuguese in the Justice Section of Ponto SJ, an online newsletter of the Jesuits in Portugal, in its special anniversary issue in March 2019, and shared with Ecojesuit. In February 2019, Pedro Walpole SJ (Ecojesuit Global Coordinator) and Edmond Grace SJ (Secretary of Justice and Ecology at the Jesuit European Social Centre) joined the gatherings and activities at Casa Velha and also visited the young Jesuits in Portugal. Edmond also wrote an article on Casa Velha, An old house for new ideas.

4 thoughts on “Casa Velha: When spirituality and ecology come together”