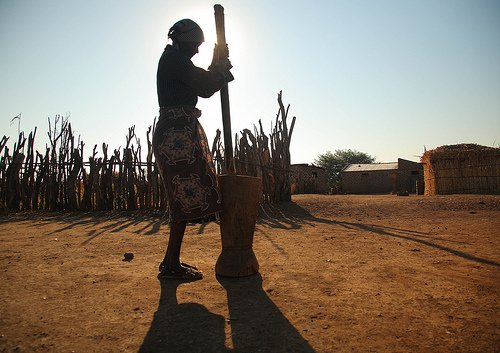 Today the Catholic Church has an important presence in Rio+20.  It started in the morning with a side event organized by CIDSE , the umbrella organization of European Catholic development agencies.  Under the not very concrete title: Sustainable Intensification, Agroecology – Right to Food and Climate and after the opening words of Mr Bernd Nilles, Secretary General of CIDSE, four panellists shared their visions under the omnipresent presence of Ms Monika Hoegen, journalist, who conducted the event.

There was an introductory presentation by Archbishop Paul Ouedraogo from Burkina Faso who brought to the audience the dramatic situation of the population in his country due to little rain, causing scarce food and massive hunger.  He pointed out the efforts of the Church to promote resilience in the communities and the need for alliances with other institutions, as the magnitude of the problems are so big, making it impossible for anyone alone to solve them.

The first panellist to intervene was the well-known agronomist from Berkeley University, Mr Miguel Altieri, Professor of Agroecology.  He argued strongly against the use of the term “sustainability.”  Agribusiness has a logic in the over-consumption of resources that makes impossible a respectful relationship with environment.  Mr Altieri proposes agroecology as a real alternative founded on being socially just, economically feasible, environmentally adapted, and culturally sound.  According to Mr Altieri, agroecology is the only alternative to grant a real food sovereignty for society.

Immediately after, Ms Loretta Dormal-Marino, Deputy Director-General, DG Agriculture, European Commission claimed for the use of the term “sustainable,” using the not very strong argument that “sustainability” is a word very well-known by the general public.  Ms Anika Schroeder, Climate Policy Adviser of Misereor in Germany, asked that food security and food sovereignty should be approached as a human rights issue.  This would demand the intervention of governments to assure rights, turning the present tendency of governments to consider food crisis as a market issue that should be considered only under economic aspects.  Regulatory measures are indispensable as to grant fundamental rights.

Finally Mr Jean Marc von der Weid, Director, Family Farming and Agroecology (AS-PTA), Brazil, presented the experience of this association that gathers small farmers, church groups, and women associations.  He shared how farmers involved in agroecology are doing better, even financially, as they are less indebted, than conventional farmers.  In his view, an agreement between agribusiness and the small producers is not possible, and it’s necessary to choose.  Most of the public was clearly on the side of the small producers if we believe the warm applause to these affirmations.

In the afternoon, it was the Holy See who organized the next side event, jointly organized by the Holy See Mission to the United Nations, Caritas Internationalis, Franciscans International, Catholic Relief Services, the Association of Volunteers in International Service and CIDSE.  A round table was convened under the title: Agriculture and sustainable societies: food security, land & solidarity.  The panel was preceded by the intervention of Cardinal Scherer, Special Envoy of His Holiness Pope Benedict XVI to the United Nations Conference on Sustainable Development and Archbishop of São Paulo.

While we have to acknowledge the commitment of the Church to be present at Rio+20 and the effort to participate in a public debate like this, we have also to recognise that it’s not easy for the Church to find a way to be present, at least to find a language that can be understood for many, and not only for believers.  It’s a big step to come forward to the public arena, and there are still things that need to be adjusted such as: a language more inclusive for believers and non-believers; more clarity in the technical options that the Church want to support, not because the Church has to produce science or technology itself, but because she finds these options morally more valuable than others – and a much more better presentation of what the Church is doing herself.