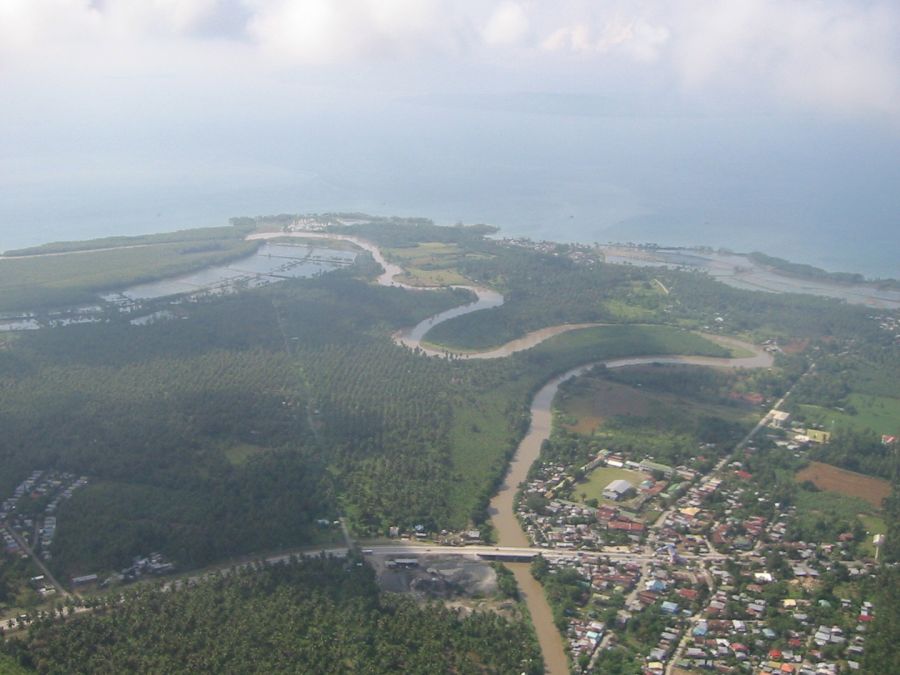 Sea levels are changing around the world and although natural variation is expected, there is an observed global rise on average.  This article, the ﬁrst in a series of three, will attempt to provide information about the main causes of the change, why they diﬀer with location, how seasons and El Niño aﬀect water levels, and what eﬀect rising sea levels have on the frequency of coastal ﬂooding.

The intention is to spur discussion about what risks there might be for the Philippines in general and also how they may be evaluated on a more local scale.  Although the focus on the Philippines allows for a particular presentation, the general ideas can be applied to many other locations and drawing insight is certainly encouraged.

Direct measurements, such as water levels relative to a ﬁxed reference on land and indirect indicators like the structure of coral reefs, were used to analyze the changes in sea levels around the world.  The primary factors contributing to the current changes are thermal expansion of the oceans due to surface warming, melting glaciers, and loss of ice by the Greenland and Antarctic ice sheets.  All these are responses to warmer air temperatures.

Although it would normally be diﬃcult to discuss sea level change without getting into the debate about whether the observed warming trend is caused by natural occurrences or is primarily human induced, it may be productive to take a step back and begin from the point of view that sea level is rising and likely to continue in the next few decades.  Some call this the “commitment” to sea level rise.  An objective view using what science can tell us may enable a better understanding and allow appropriate responses to the situation.

For almost two decades now, satellite altimeters that measure the height of the sea surface provided a global view of the phenomenon of sea level change and also allowed us to monitor changes over time.  Water levels in some areas are falling, in others they are rising.  Falling sea levels are usually related to the vertical movement of land from “glacio-isostatic rebound,” or land that is rising as it is relieved of pressure from ice that used to lie on top of it.  This response takes thousands of years and uplift rates are on the order of 10 millimeters per year.  Uplifting land can be found around the Baltic Sea and Hudson Bay, among other areas.

For the period 1992-2011, global sea level was observed to increase at a rate of 3.1(±0.4) millimeters per year.  This rate is the global average and can be thought of as resulting from all the locations measured on the surface of the ocean.  If we limit the region to the area around the Philippines, the rate for the same period is 5.8(±0.6) millimeters per year.

This variation is further complicated by regional ocean-atmosphere dynamics.  Water is pushed across the Paciﬁc toward the Philippines by what is known as the North Paciﬁc Subtropical Gyre.  It is the clockwise circulation of water around a high-pressure area in the northern Paciﬁc Ocean basin that is due to the Earth’s rotation.  Furthermore, trade winds blowing westward along the latitude of the Philippines help intensify the current that ﬂows northward as it encounters the Philippine coastline.  At the opposite side of the Paciﬁc, water is pulled away from land, resulting in lower sea levels.  Local factors also aﬀect sea levels.  Interactions between physiography, tectonic activity, inland tides, climate patterns, and weather eﬀects inﬂuence water levels in a particular locale diﬀerently from other areas.  Therefore, sea levels will vary from one coastal area to another depending on local conditions.

Assuming that the rate of change of sea level around the Philippines for the period 1992-2011 does not change, we can expect waters to rise by at least 20cm in the next 40 years.  Figure 1 shows the absolute rise in sea level around the Philippine coast by 2050.  This is in addition to the current average water level at any one site.  Notice the spatial variation; the highest expected are along the Paciﬁc seaboard from Samar all the way down eastern Mindanao, the Zamboangas, and the island provinces of Romblon and Marinduque in the Sibuyan Sea.

As water levels vary, so do the eﬀects on the coasts depending on a few primary factors: the erodibility of the coastal landform, the rate of change along a coastline – how fast land is being eroded or how fast sediment is building it up, the coastal slope, the wave heights along the coast, and the tidal range.  For simplicity, information about coastal landform dynamics were left out, but if we consider all the other parameters, a vulnerability index for the Philippine coast can be created.

The expected sea level change for a coastal area and other geophysical factors that determine vulnerability help identify sections of the Philippine coastline that will be aﬀected more by the combination than by a change in water level alone.  The indexing provides a national perspective but is only a preliminary step to the discussion on what can be known and how best to respond.

To simplify the current analysis, other environmental parameters that will change the vulnerability rating were left out.  One of these is land vertical motion.  Most of the Philippine archipelago straddles a complex system of deformations at the boundary between the Eurasian Plate and the Philippine Sea Plate.  Forces counteracting relative sea level rise include uplifting land due to tectonic activity.  As tectonic plates move towards each other, land is pushed upward where they collide.  Coastal areas in western Pangasinan, Bohol, and eastern Davao Oriental, for example, are rising at various rates, although none of them as rapid as sea level rates.

Sinking land is also an eﬀect of natural forces.  However, subsidence induced by human activity has more signiﬁcantly enhanced sea level rise.  Groundwater extraction is lowering parts of the land up to as much as half a meter a year in parts of Metro Manila.  Large river deltas in Asia with high population densities are facing similar water management issues that are linked to the impacts of sea level rise.

Higher water levels also mean potential salination of freshwater resources.  What used to be rice cultivation areas in parts of Central Luzon were converted to ﬁsh ponds.  Salt in some types of soils, once inundated with seawater, is diﬃcult to remove.  Other signiﬁcant impacts of rising water levels include higher extreme levels, to be discussed in the last article of this series.

Responding to the certainty of sea level rise

In a way, there is more certainty that sea level will rise than there is in the future value of coastal resources.  Gradual change will allow gradual price adjustments but the impact of any drastic alteration is likely to be highly disruptive.  And that is only the economic aspect of the problem.

The discussion is deliberately limited to adaptation approaches.  Any measure taken to actually slow or stop the impacts of sea level rise will seem futile in the short term but it is hoped that the Philippines will be able to incorporate mitigation eﬀorts as it strengthens its capacity to respond to environmental change, eﬀectively and in a timely manner.

To focus on the priorities of a province or region, any vulnerability analysis needs to be localized in order for the most at-risk areas to be identiﬁed.  Prioritizing vulnerable and at-risk areas would ideally include social factors such as culturally valuable sites, human capital, and the capability of a community to adapt to changes.  Other losses to disasters that need to be part of the prioritizaton include infrastructure investment and the environmental amenities a particular ecosystem provides, which usually are not assigned values in a purely economic sense.

Ultimately, the susceptibility of a community to the impacts of changing sea levels will depend on the interaction between the human and natural environments, remembering that nature has its own level of resilience.  Respect is needed to allow government and communities, including industry, deal with the issue in the capacity that they can.  It is our responsibility to seek answers to our questions and understand the information available to deepen and give quality to our work.

•           The National Mapping and Resource Information Authority (NAMRIA) is the central mapping agency of the Philippine government.  They provide mapping services and is also the authority on maintaining the country’s baseline for geodetic surveys, which include tide height monitoring.

•           The Intergovernmental Panel on Climate Change (IPCC) produces reports and supplemental material on climate change.  Working Group II continues to report on developments of the seven-step approach to assess the need for mitigation and/or adaptation to reduce the risk from climate-related change.  A special report on “Extreme Weather Events and Disasters to Advance Climate Change Adaptation” has also been recently released.

•            Teaching and training resources for the geoscience community is available at MetEd.  Learning modules include topics such as tropical meteorology, coastal climate change, and ﬂood frequency analysis.

•           The Centers for Ocean Sciences Educational Excellence (COSEE) at the University of Maine in 2007 shares a laboratory worksheet on “Thermal Expansion and Sea Level Rise”.

•           To show the regional variability of sea level, the University of Colorado Sea Level Research Group divide up the ocean into different regions and show “Regional Sea Level Time Series”.

•           The complexity of the physical parameters that determine how an area along the coast will withstand sea level rise or rapid change is simpliﬁed by creating a Coastal Vulnerability Index (CVI).  An example of the application is presented by the US Geological Survey.

•            Geophysical parameters deﬁne the environmental characteristics of an area.  Combining these with the factors of human vulnerability and exposure will provide an overview of the interaction between the human and natural environments and how sea level rise risk might best be approached.  The Manila Observatory in 2005 produced relevant maps in the project “Mapping Philippine Vulnerability to Environmental Disasters”.

•           In many cases, it may be helpful to highlight the economic value of resources in order to facilitate the setting of priorities.  The National Economic Development Authority (NEDA) of the Philippines, in coordination with the UNDP and ECHA, issued a handbook in 2008 that provides guidelines for such an approach, “Mainstreaming Disaster Risk Reduction in Subnational Development”.

•           The case for bringing disaster risk management into the mainstream is furthered in a document published by the Prevention Consortium in 2009, “Mainstreaming Disaster Risk Reduction into Development: Challenges and Experience in the Philippines”.