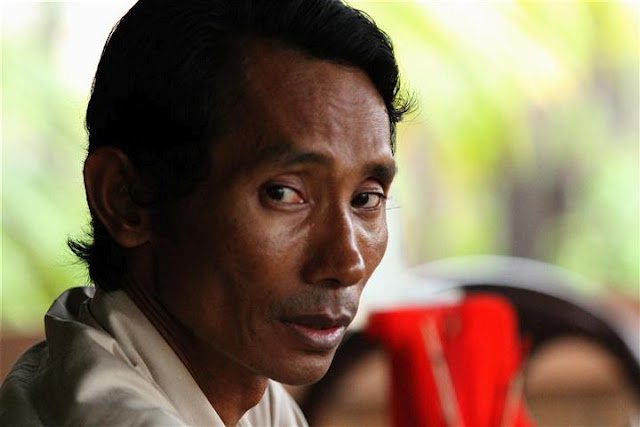 Once in a while, someone comes along and flashes a light on things that make others uncomfortable. May we never exchange light for darkness. 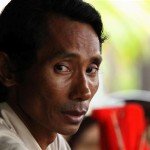 Death in the forest

On a hot sunny day 26 April 2012 in southwest Cambodia, Chut Wutty, director and founder of the Natural Resources Protection Group, was driving with Cambodian Daily journalists, Phorn Bopha and Olesia Plokhii, from Pursat to Koh Kong to investigate illegal logging in the area. After passing through forested areas, they arrived at a clearing with a few wooden sheds in Veal Bei Point, Bak Khlang commune, in Mondul Seima District of Koh Kong Province. All three got out of the car and walked around, taking photos of yellow vine stacks behind the houses. Men in uniform came forth demanding their cameras. Arguments broke out and escalated. Within the few minutes that followed, two shots (or three or four, depending on which source is believed) were fired in rapid succession. After the commotion, ChutWutty, 46, was dead inside his car, and one military police officer, In Rattana, 32, lay lifeless on the ground in front of the vehicle.

The actual circumstances surrounding the deaths of these two men still remain mysterious even though two women journalists, four other uniformed men, and several villagers were in the immediate area. On the day after the incident, four different versions of what happened appeared in the newspapers. One story is that Wutty shot the military police officer first, hitting him twice on the torso, before the officer was able to retaliate and shoot Wutty back. A second version is that In Rattana shot at Wutty who was inside his car. But the bullets ricocheted back and killed himself in the process. Still a third account comes from a local villager who claims to have witnessed the shooting, saying In Rattana threatened Wutty with his AK-47, which Wutty grabbed and fired at the officer, thus provoking the other military police officers to shoot back. The final story that came out the same day as the other versions,iv which became the official report of the military police, describes how after shooting Chut Wutty, In Rattana was instantaneously struck with guilt, shot himself twice in the chest with his AK-47 assault rifle and “killed himself out of remorse.”

Who was Chut Wutty?

Born and raised in Svay Meas village, Kandal Province, Chut Wutty (his profile in Khmer) entered the military, did basic training in Cambodia, and went for six additional years of training in Russia, obtaining a master’s degree in Military Studies in 1992. He worked with the Cambodian Mine Action Centre and the Ministry of National Defense before becoming deputy director of Global Witness in 2003. After Global Witness was expelled from Cambodia for releasing a report linking illegal logging activities with high government officials, Wutty founded the Natural Resource Protection Group, a grassroots NGO that did not receive much funding but was able to draw significant media attention to the plight of indigenous peoples and the rapid destruction of the forests they occupy, particularly in Prey Lang and in the Cardamom Mountains.

Chut Wutty’s love for forests and Cambodia’s indigenous peoples would lead him to drive for days and weeks into remote areas to investigate and document deforestation activities. The community-initiated forest patrols in Prey Lang, which are one of the most organized and effective community-based initiatives, were encouraged and supported by Wutty. When encountering irregularities, his military background came to the fore, enabling him to directly confront companies and government officials whom he suspected of being involved in destructive and illegal activities. According to Wutty:

“They simply put the blame on the forest protectors, the local community, and try their best to conceal illegal actions by businessmen, turning a blind eye and deaf ear on them. According to the law, those living surrounding the forest have the right to access non-timber forest products. They are entitled to use timber from the forest to build their houses. In contrast, this access is denied.”

Marcus Hardtke, Southeast Asia coordinator for the conservation group ARA and a close friend of Wutty for more than a decade, said that Wutty was one of the few who dared to stand up against a corrupt system, thus calling his death a “real tragedy” for Cambodia. Uniquely regarded as the only citizen of Cambodia with both the courage and the skill to do the kind of work he did, Marcus continues, his death betrayed at least 15 years of efforts to conserve Cambodia’s environment. Wutty died trying to shed light on practices destructive of Cambodia’s natural heritage and her people. 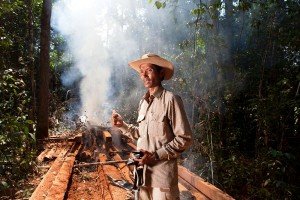 What was he looking for?

The private company operating in the area, which employed the two security guards and possibly the three military police officers who met Wutty, is Timbergreen. This Chinese-owned company reportedly holds an Economic Land Concession (ELC) license to clear the approximately 14 km2 reservoir of the 338 MW Lower Russey Chrum dam in Mondul Seima District, near where Wutty was shot. The ELC license permits the company to clear the forest within predetermined boundaries for industrial-agricultural activities. Incidentally, construction of the dam is contracted to another Chinese firm, Huadian Corporation.

In a television program by Dateline SBS, David O’Shea reports on this incident and hears how a company can use an ELC license to gain access to logs far outside prescribed boundaries. Wutty had long alleged that Timbergreen was abusing its clearing permit and was involved in illegal logging activities, cutting down luxury timber far beyond the limitations of their license.

What initiated the commotion on that day was Wutty’s photographing of yellow vine. What is so special about this vine? Yellow vine is a woody creeper that when processed, can be used as traditional medicine for treating stomach ailments. Although generally prohibited under Cambodia’s forest law, Wildlife Alliance claims that Timbergreen has a permit to collect and process yellow vine in the area. But according to the same Dateline SBS report, Prof Andrew McDonald of the University of Texas Biology Department claims that on the molecular level, the active compound of yellow vine bears a striking resemblance to the drug popularly known as Ecstasy, and that drug production is easily possible from the processing of yellow vine. Marcus Hardtke is convinced that something of this kind is occurring in the Cardamom Mountains. 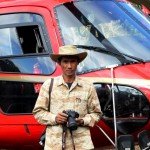 The official report by the military police regarding the deaths of both Chut Wutty and In Rattana was broadly criticized, possibly prompting Prime Minister Hun Sen to initiate on 30 April, four days after the incident, a joint committee to investigate the shootings. The committee was comprised of five high-ranking government officials, including the deputy director of the National Military Police. Five days later, the committee closed its investigation and released its findings on 5 May, concluding that Chut Wutty was shot by In Rattana because of an escalating “misunderstanding” while In Rattana was accidentally shot with his own AK-47 when Rann Boroth, 27, a security guard of Timbergreen, tried to disarm him to prevent further shootings. Although this version is more plausible than previous findings, several human rights groups do not believe it. Since then, there has been no further mention of Timbergreen or of any illegal activities in the forests of the Cardamom Mountains.

Chut Wutty’s death was a tragedy. But an even deeper tragedy is to regard his death simply as a result of a “misunderstanding.” It would be most unfortunate if this conclusion succeeds in distracting the people from what he was attempting to do and from the values he died to uphold. Global Witness put it this way:

“The work of activists such as Chut Wutty should be publicly celebrated as heroic. Yet the reality in Cambodia is that members of the military, business and political elite, who prey on the country’s natural resource wealth for personal profit, view them as a direct threat. As this terrible incident shows, those who take on these vested interests face intimidation and even death.

“The dangers faced by individual activists working on land and forest protection have always been severe; Wutty is not the first to be killed, and sadly, may not be the last. But the stakes for Cambodia’s people and its environment are now just as high, as forest and land clearance proceeds at a devastating pace.”

One frontrunner has been gunned down, but many still stand behind him. Svay Phoeun, a community leader from Preah Vihear Province said, “Chut Wutty’s heart is gone, but thousands of Chut Wutty hearts still survive. We are not afraid of the person who killed Chut Wutty for trying to stop illegal loggers; we have never been afraid.”