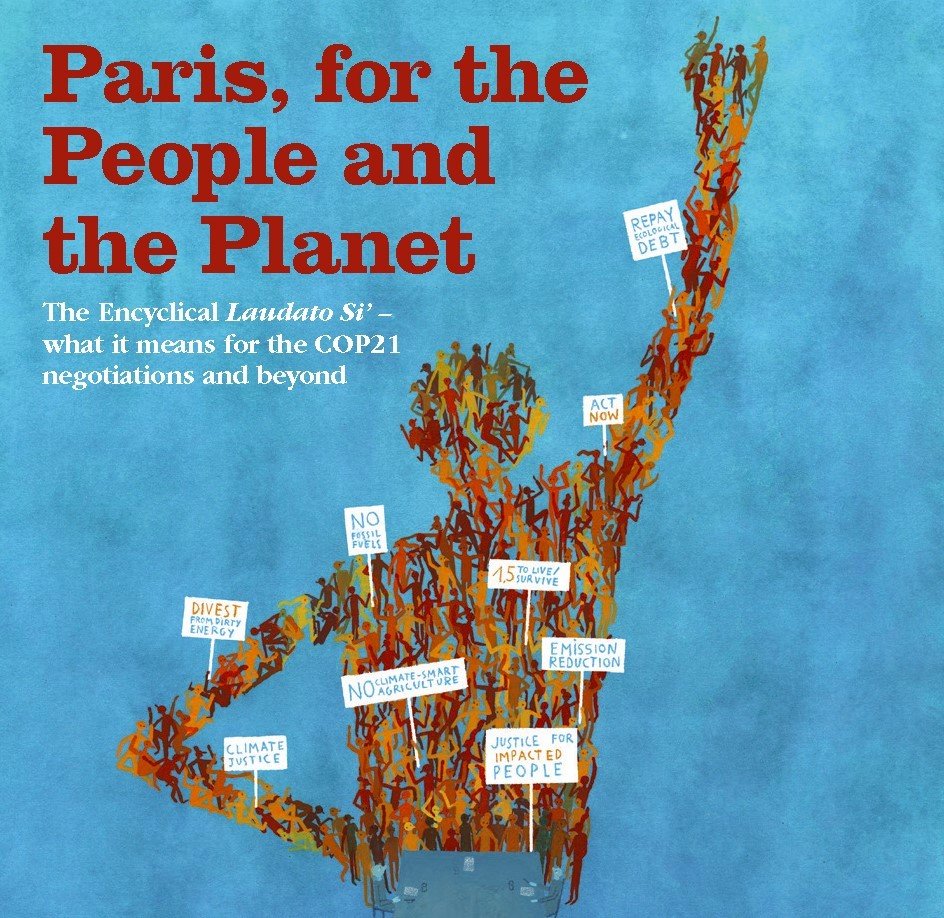 CIDSE, an international global alliance of 17 Catholic development agencies working together for global justice put together a report that sets out CIDSE’s vision for the climate agreement, one that places the moral dimension of climate change at the core.

Inspired by Laudato si’, Pope Francis’ environment encyclical, the CIDSE report entitled Paris, for the People and for the Planet  was launched last month, a month before the beginning of the climate change talks, the 21st Conference of Parties (COP 21) in Paris, France. Based on the vision of the papal encyclical, the UN conference in Paris is expected to help kickstart a process to bring about transformative and systemic change to tackle the root causes of today’s social and ecological crisis.

In its report, CIDSE stresses that governments should place the poorest and vulnerable communities at the center of the debate, as they are the ones who are suffering the most from climate change impacts, and being hit hardest, they have limited capacity to adapt. Climate change risks pushing people and communities back into poverty, undoing decades of development gains.

CIDSE advocates for a Paris agreement that foresees the phasing out of all fossil fuel emissions and the move towards a 100% renewable energy future with sustainable energy access for all. It should ensure that a 1.5°C threshold is enshrined in a legally binding global agreement, set a goal for complete decarbonisation by 2050 and establish five-year reviews of pledges to scale up the efforts.

And to pay the “ecological debt” owed to poorer countries, rich countries should deliver adequate, predictable and timely climate finance to poor countries. The report mentions Pope Francis’ concept of “ecological debt” and that deep historical inequalities cannot be overlooked within the climate negotiations. “Inequity affects not only individuals but entire countries; it compels us to consider an ethics of international relations. A true ‘ecological debt’ exists, particularly between the global north and south, connected to commercial imbalances with effects on the environment, and the disproportionate use of natural resources by certain countries over long periods of time.” (LS 51)

Other concerns are suggested to be part of the Paris Agreement discussions such as operationalising the concept of human rights and its links with food security and gender equality and the need to provide electricity to billions who still do not have access. There is also the desire to challenge the current economic model of growth and the exclusive focus on market-based solutions.

CIDSE refers to equity as not only about how to share the effort (emissions reductions and support) amongst countries in a fair way; it is also about building a transformative agenda for social justice and human rights.

The CIDSE report also calls for action to address the global over-exploitation of finite natural resources which “requires limits to overall consumption” while referring to Pope Francis in the sense that “(w)e are faced not with two separate crises, one environmental and the other social, but rather with one complex crisis which is both social and environmental. Strategies for a solution demand an integrated approach to combating poverty, restoring dignity to the excluded, and at the same time protecting nature.” (LS 139)

On climate finance, CIDSE asks that developed countries be provided a plan and timeline on how support can be increased to developing countries to meet the US$ 100 billion goal. On climate and agriculture, an explicit reference is needed in the operative section of the core Paris agreement as to the impact of climate change on food security. At the same time, there is also the need to ensure climate action does not have negative impacts on food security, that there is support and promotion of agroecology through adequate public funding, and that sustainable and resilient food systems are developed and sustained. This call for a paradigm shift is reflected in the accompanying CIDSE campaign, Change for the Planet – Care for the People, whose aim is to spark and enable a radical change in people’s lifestyles towards living simply by reducing overall energy consumption and making environmentally-friendly food choices.

Paris, for the People and the Planet presents people-driven initiatives as pivotal to reach climate justice. And as CIDSE shares, transformative change means moving beyond “business as usual,” towards a just, equitable and sustainable use and distribution of global resources by citizens of the world. This is also a clear message from the papal encyclical that “we have to realize that a true ecological approach always becomes a social approach.” (LS 49)