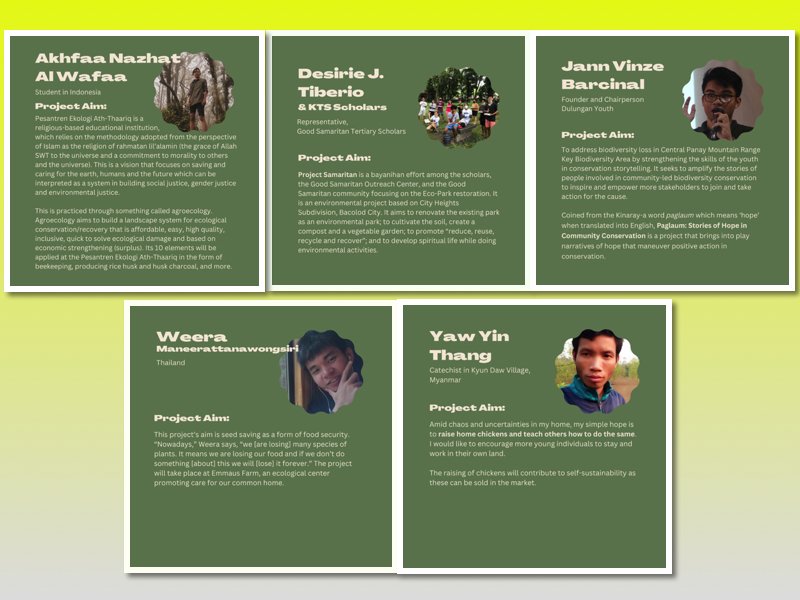 As the Season of Creation drew to a close, five young people from Thailand, Indonesia, Myanmar, and the Philippines were selected as the first awardees for the Creators of Hope project of the Jesuit Conference of Asia Pacific (JCAP) and awarded a small grant for their ecological projects.

Weera “Air” Maneerattanawongsiri, 26, is from a northern tribe in Thailand and works at the Emmaus Farm in northern Chiang Mai and wants “to gather indigenous heirloom seeds from the different tribal areas to plant, propagate, and share with farmers.”

Akhfaa Nazhat Alwafaa, 19, lives in the Ath-Thaariq Ecological Boarding School in Garut, West Java, Indonesia where he learns about Islam and the 10 principles of agroecology along with the other boarders and wants to apply these in the boarding school which is situated in a farm.

Desirie Tiberio, 22, and Jann Vinze Barcinal, 21, are both from the Visayas region in central Philippines. Desirie with her youth group in Bacolod in Negros Island, wants to “rehabilitate an abandoned area and turn it into a neighborhood eco-park housing a spirituality center, a seedling nursery, and a vegetable garden.” Jann Vinze wants to do a writing and storytelling workshop for the youth as part of the project Stories of Hope in Community Conservation of the Dulungan Youth featuring the “indigenous communities of the Central Panay Mountain Range and their actions to protect and conserve their lands.”

Mr Yaw Yin Thang, 33, is from Kyun Daw village, Kachin State, in Myanmar and is a village catechist and home-based farmer with a small lychee and lemon garden and a few chickens. He wants to raise more chickens “so more young people can work with him and choose to stay in Myanmar instead of leaving for nearby China to look for work.”

JCAP launched the Creators of Hope project in April 2022, searching “for 10 young individuals or teams within the Asia Pacific region whose work and commitment to ecology can be a source of hope for others.”

For the full story, please go to JCAP eNews.