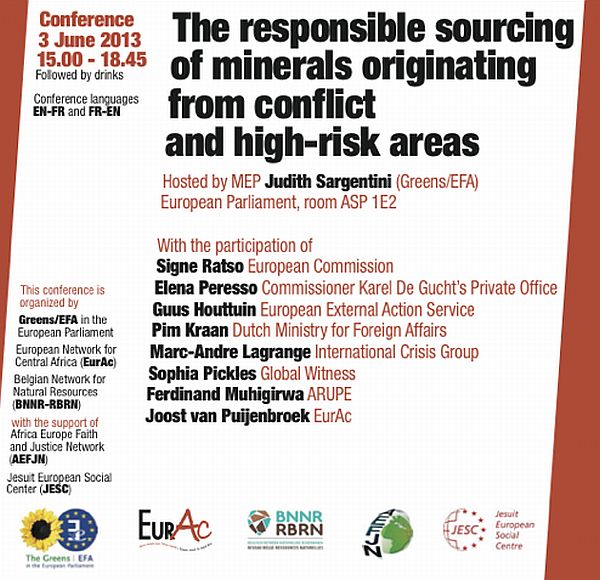 It has been a few months since members of civil society met to look into the responsible sourcing of minerals from conflict and high-risk zones, commonly known as “conflict minerals.”

A first pulse was launched on 13 March 2013 in the Belgian Senate on a seminar entitled “Towards an initiative of the European Union on conflict minerals,” organised by the Belgian Network for Natural Resources (BNNR-RBRN) and the European network for Central Africa (EurAc), under the chairmanship of Belgian Senator Olga Zrihen.

Focusing predominantly on the content and scope of the future European initiative on responsible sourcing of minerals from conflict and high risk zones, the seminar allowed, on the one hand, to open a discussion on this matter between the political world and civil society and, on another hand, to identify a set of relevant issues to civil society on the first track on advocacy strategy about conflict minerals, two weeks before the opening of the EU public consultation.

A few days before the end of the public consultation, it was crucial for the main core group of a broad European coalition of NGOs consisting of SOMO (Centre for Research on Multinational Corporations), CCFD-Terre Solidaire, Christian Aid, Global Witness, EurAc, CJP, IKV Pax Christi, JESC, and Justice et Paix, to extend the debate on the scope and content of the bill, but also to know how this European initiative would consider producing positive effects on the ground in terms of stability and development in the long term.

To do this, two key aspects of the future initiative were deepened: the principles of the Organisation for Economic Co-operation and Development guidelines on “due diligence” used as tools to increase transparency and sustainability of the supply chain minerals, and the realisation of benefits in terms of sustainable development, good governance in the mining sector, local economies and populations of countries with risk and conflict.

As an illustration of conflict minerals and to show what was already done in some countries with risk and conflict to stem the problem, an overview of the political situation in both Colombia and in the Democratic Republic of Congo (DRC) was also shared by Ferdinand Muhigirwa Rusembuka, SJ, analyst of the DRC to the International Crisis Group (ICG) and Director of the Arrupe Research and Training Centre in Lubumbashi, DRC, and Marc-Andre Lagrange from ICG, and Guus Houttuin of the European External Action Service.

With the credible inputs from the invited speakers, the conference was a meaningful and useful activity. In addition to the roadmap, a clear insight of what the EU plans was shared, allowing us to better steer our advocacy.