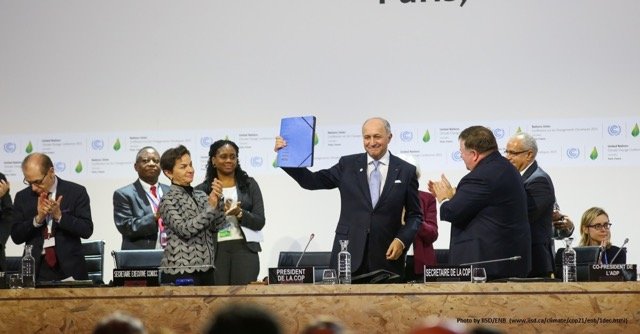 There is no doubt that the Copenhagen Climate Change Conference (COP15) in December 2009, caused a real trauma in the world of climate change negotiations.  Since then, these negotiations have taken on a tone of fatalism or at least a huge prudence.  But there is an acknowledgement that COP 21, presently taking place in Paris, is proceeding more smoothly than Copenhagen.  The messages released by world leaders at the opening ceremony were much more positive than in previous occasions.  It is also evident that the preparatory work undertaken enabled an improved definition of the positions taken by the respective parties, compared with 2009.

In fact, the evolution of the Conference is responding to the expectations.  The President of the Conference, Mr. Laurent Fabius who is also the French Foreign Minister, asked the different working groups for a consistent draft of agreement ready by Saturday, 5 December, so that the ministers could discuss this during the following week.

During the first week, the experts from the different governments carried the weight of the negotiations, with the foreign or environment ministers taking the lead in the negotiations on the second week.  We are at that time right now, the time for politics in the most honourable sense of the word.  It is the time to negotiate and hopefully to reach agreements.

The request from Mr. Fabius got a successful response and by Saturday, 5 December, a Draft Paris Outcome was released, although several hours later there was a new version including new amendments, officially titled as Draft Paris Outcome – Revised draft conclusions proposed by the Co-Chairs, Addendum (FCCC/ADP/2015/L.6/Rev.1/Add.1).

At first glance, it can be surprising because the text is full of words or phrases in brackets, and the possibility for several options often appears.  This means that many points still are to be agreed and that, at this stage, there are very few solid agreements.  The positive side is that the main points were identified and that the ensuing discussions will focus on these.  This is a breakthrough and a positive message towards the negotiations.

With this development, we share some critical issues that will be addressed during this second week:

1.The threshold to the increase of global average temperature under 1.5 degrees C or well below 2 degrees C

Science is indicating that the increase of the global average temperature beyond 2 degrees C is going to put an enormous pressure on the planet.  To limit greenhouse emissions below 1.5 degrees C is the only response that offers some possibilities of success to decarbonize our societies by 2050.  Although the discussion may seem irrelevant as we are talking about a difference of 0.5 degree, this difference is crucial for many people in terms of survival.  Of course, the difficulty lies on the side of the respective economic efforts associated with each figure.

2. The obligatory character of the agreement

This is one of the significant aspects of the negotiations, although some creative alternatives are being proposed.  To start with, the name is already an issue.  If it is called a “treaty,” it has to be passed by the US Senate for example, a situation with very little possibility of success.  But let’s imagine that a suitable name is found.  For several countries, it is very difficult to accept an external (international) authority imposing targets on CO2 emissions.

The alternative being considered is that the obligation can be carried under national legislation.  If this is sufficient to guarantee the accomplishment of the objectives, then the international agreement can acknowledge the enforcement not directly through the international agreement but as a result of the implementation of the national legislation.  This can open a very interesting space of collaboration both for the US and China.

3. The possibility of revising the agreements every five years

This option is gaining support in the negotiations. The European Union (EU) spoke out against this possibility because on the one hand, the EU fears that we may get into a rhythm of subsequent re-negotiation of the agreements that can be costly and stressful.  Secondly, the EU expects significant investments in the medium and long term (infrastructure, technology, among others) that require years of design and implementation and to introduce a periodic review of the objectives may jeopardize such investments.

Nevertheless, the logic of the objectives that can be adjusted periodically has its own consistency, as it can be an effective tool to better align with the Intended Nationally Determined Contributions (INDCs), that reflect each country’s proposed emission reduction targets.  With this periodic revision, the INDCs can be adjusted according to new data that science provides.

The figure of the US$ 100 billion by 2020 remains a very solid reference, as the Organisation for Economic Co-operation and Development (OECD) reminded the total international investments for climate change amounts to half that figure.  Undoubtedly, it will be a financial effort if there is a general acceptance that the objective can be achieved.

But many questions are raised with reference to this this figure.  First is to determine who will contribute as China, India and South Africa are resisting to contribute to the fund with the argument that they have polluted for much less time that the developed countries.  Developed countries in turn insist that this has to be a common effort according to present capacities.

This is certainly a critical concern that needs a comprehensive discussion. There is also the concern by civil society of how this money will be spent, as the fear is that intermediate institutions that will handle the funds, namely development banks and agencies, can use the money to finance huge infrastructure or even to sustain dictators.  Thus, these investments will not have a real impact in the lives of those who struggle the most to adapt to the impacts of climate change.

5. The role of civil society

COP 21 confirmed the tendency to reduce the presence of the civil society in these types of international negotiations.  The civil society in Paris meets amongst themselves in a wide range of conversations and initiatives such as the Paris-Le Bourget site, the Global Village of Alternatives in Paris (Montreuil) and the Zone d’Action Climate (Climate Zone Action) of the Coalition Climate 21 showing creativity and broad and diverse engagements.

But civil society is far from the intense and direct advocacy and lobbying on the actual negotiations.  Conference officials cannot be blamed as this is a trend observed both at national and international levels.  Bureaucrats and politicians want to keep their distance from civil society and confine these groups to spaces that can be managed and controlled, but clearly constraining dialogue.  Certainly, more imagination is needed and more emphasis has to be put in our work back in our respective countries to integrate civil society better at the negotiation tables.

Unpredictable but the process is going well so far

Everything is open for discussion and that makes the final result unpredictable, but the tone of the communications, the content of the first draft of the climate agreement, and the obvious responsibility of these negotiations, give us the necessary optimism to expect an acceptable agreement by the end of the week.