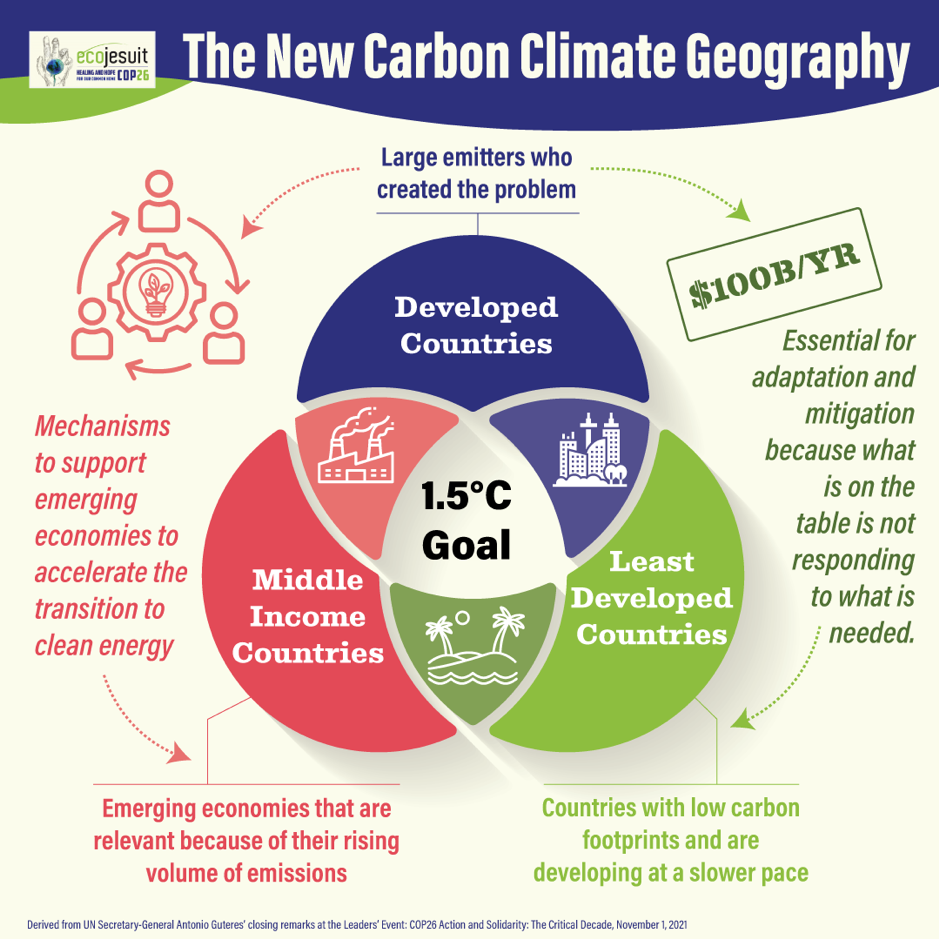 Recognizing that the geography of emissions has shifted from being just between developed and developing countries, UN Secretary General António Guterres at the COP26 Leaders’ Event: Action and Solidarity spoke of a new carbon climate geography that differentiates responses between emerging economies and least developed countries as an approach to avoiding the tipping point towards runaway climate change.

Following virtually from the Philippines, we witnessed the opening of COP26, held right after the G20 Summit in Rome on 30 and 31 October that formally endorsed a 15% minimum tax on multinational corporations. Parties then adopted the COP26 provisional agenda with some tweaks on 31 October, then formally opened the UN Climate Change Conference with the World Leaders’ Summit on 1 to 2 November 2021.

There is finally consensus that we should aim to ‘keep 1.5 alive’ and find ways to cap global temperature increase at 1.5 degrees Celsius from pre-industrial levels. Many Parties recognize the urgency and the shortfalls, summarized by Mia Mottley, Prime Minister of Barbados, at the opening ceremony:

Challenged by young people on the streets of Glasgow calling for “no more blah blah blah” during the first two days of COP26, 117 world leaders tried to show that they are doing something to deliver promises made in Paris six years ago.

Eight of the top 10 carbon emitting countries were represented on the first day of the World Leaders’ Summit. Six of them – the US, Indonesia, Korea, Germany, Canada, and India – were represented by their Heads of State. China, the top emitter, sent a written statement. The Russian Federation and Iran have yet to issue statements.

For the top emitters from developed countries, the US is back on the table with a US$3 billion pledge to finance adaptation annually starting 2024, and is active in the informal consultations of the subsidiary bodies.  Germany commits to cutting 65% of its emissions by 2030, increase climate finance contribution to €6 billion per year by 2025. Canada doubles its climate financing to $1 billion with the aim of moving away from coal, and will contribute to the adaptation fund for the first time.

For the top emitters from middle-income and emerging economies of Asia, Indonesia targets the forest and land use sector, responsible for 60% of the country’s emissions, to become a net carbon sink by 2030. India provided four measurable actions by 2030, including getting 50% of its energy requirements from renewables. Japan committed to financing clean energy transition in Asia and to double adaptation financing to US$14 billion including for disaster risk reduction. Korea described its actions to phase out coal and promote cooperation in forest restoration, and proposes to hold the Youth for Climate on a regular basis. China’s written statement featured a call to multilateralism, and announced its Action Plan for Carbon Dioxide Peaking before 2030, with a clearly defined timetable, road map, and blueprint for key areas such as energy, industry, construction, and transport.

How negotiators are translating the commitments and pledges of their Heads of State is another matter. A Ukraine negotiator, for example, asked to defer the agenda on reporting and review of Parties included in the Annex I to the Convention, while the Prime Minister took pride in being one of the earliest signatories to the Paris Agreement. This affects progress in transparency.

Negotiators discussing the template for tracking progress in implementing and achieving NDCs took a lot of time expressing dissent about the title of the template. The delay in the decision for Article 6 on carbon market mechanisms was also cited as another reason for delaying progress on the template. These affect progress in implementing the Rulebook. This is why COP26 President Alok Sharma kept repeating the call for the Heads of State to ensure that their negotiators move in line with promises made during plenary sessions.

And as government leaders meet and commitments secured, we need to be reminded of the 100 companies that are responsible for more than 70% of global emissions, the carbon majors, whose accountability need to be included in the negotiations taking place.

Heading to COP26 this week, it is helpful to be reminded by the Ignatian commitment for climate justice, a commitment to change and for change. We turned the five key points that COP26 needs to focus and the five commitments of the Ignatian family and collaborators into questions that can guide us these next two weeks as we engage in the COP26 process:

Rowena Soriaga, Maricel de Jesus, and Brex Arevalo are part of the Ecojesuit team in the Philippines and are virtual Ecojesuit COP26 delegates.

This article is also available in French and Spanish.