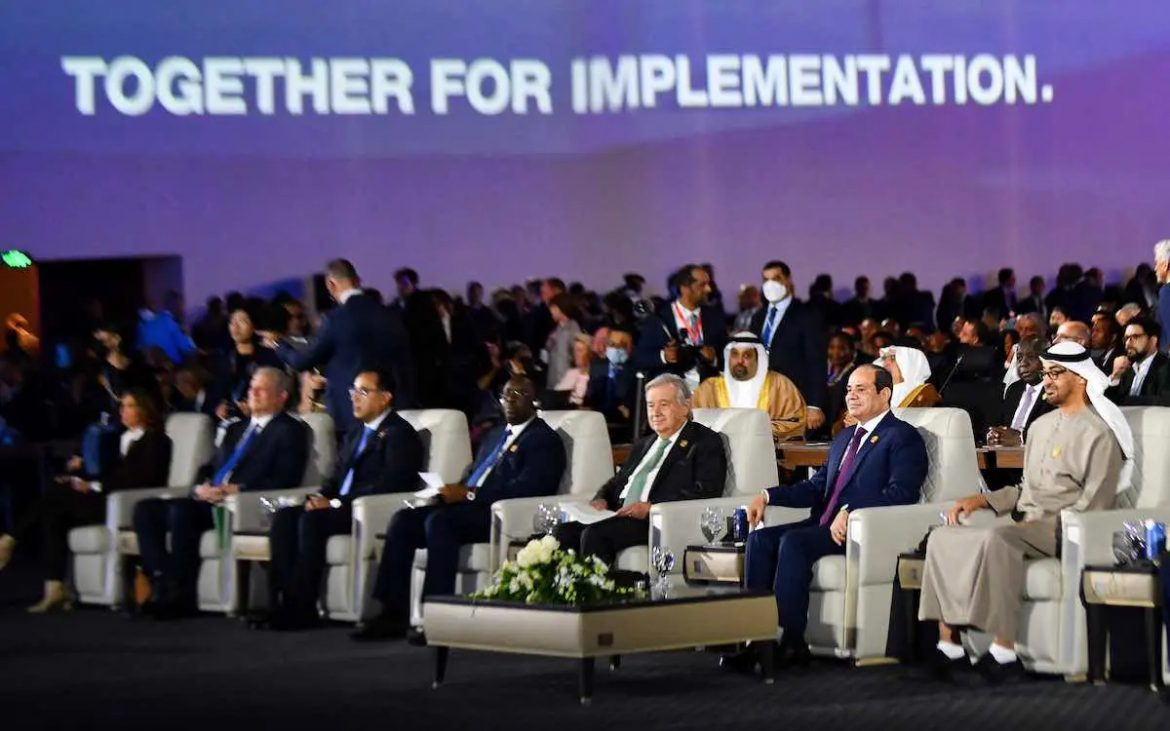 COP27 is now ending its first week and expectations are beginning to plummet whether implementation and real action can truly be achieved. With the growing dissent over the corporate-political lobby working through the system, there is anticipation next week as to what US President Joe Biden’s intervention on 11 November can bring and the forthcoming negotiations and decisions that will lead to, as UN Secretary General António Guterres stated, “a Climate Solidarity Pact or a Collective Suicide Pact.”

Focus was on the world leaders gathered, to turn commitments into agreements and to commit to implement. With recent climate disasters – the floods that ravaged lives and livelihoods in Bangladesh, Pakistan, and Nigeria, and extreme drought and heatwaves in the Northern Hemisphere – still fresh in most people’s minds, there is expectation that real and serious climate action is accelerated, and the promises outlined in the Paris Agreement are delivered.

World leaders were welcomed by Egypt’s President Abdel-Fattah El-Sisi and UN Secretary General Guterres who stressed that “the clock is ticking” and we are losing “in the fight of our lives” in his address in the High-Level opening ceremony. “We need to fight together and win for the eight billion members of the human family and for the coming generations.”

Dubbed as an “implementation COP,” there is enormous pressure and urgency on the world leaders gathered to demonstrate a transformative implementation, particularly in delivering on the US$ 100 billion of annual climate financing yet to be fulfilled, and funding arrangements for loss and damage – a long-standing issue repeatedly swept under the rugs of previous COPs since COP19 in November 2013.

For the first time, negotiators of developing countries successfully lobbied for the inclusion of loss and damage in the climate conference’s formal agenda, overcoming the long-standing resistance from the US and European Union.

These are notable points raised over the course of the two-day Summit as heads of states and governments delivered their national statements and commitments in keeping the goal of 1.5°C alive:

While new approaches such as the ETA are indeed needed to scale up climate financing and speed up energy transition in developing countries, rigorous safeguards to prevent greenwashing must first be in place and secured.

UNFCCC Executive Secretary Simon Stiell called for world leaders to ensure that their negotiators guarantee complete consistency with the statements made, to ensure that decisions reflect the urgency of the climate crisis, and that rapid action is seen in terms of adaptation, mitigation, and loss and damage.

The commitments and statements are encouraging, but caution and skepticism are still needed. Government leaders echoed the need to reform financing mechanisms and infrastructure, yet how this will be redefined to ensure that vulnerable communities are able to access funding remains an obstacle.

Influence of corporations and corporate greenwashing

Further undermining the credibility of the COP27 process is the growing lack of transparency given the overwhelming presence of the corporate lobby. Environment groups expressed their dissent on the influence of corporations at the climate talks and raised concerns on corporate greenwashing.

For instance, COP27 is sponsored by Coca-Cola, a notorious plastic polluter. The conference organizers also hired Hill+Knowlton Strategies to manage communications for COP27 negotiations. The public relations firm is known to represent fossil fuel industries such as Shell and Chevron.

Civil society and advocacy groups are raising concerns on whether COP27 will truly deliver or will fall short on its promises as with previous COPs. The Pan African Climate Justice Alliance expressed fears that Africa is already losing out on the fight for lives and livelihood at COP27 given that the Special Needs and Circumstances Consideration for Africa was dropped from the conference agenda, despite the conference being dubbed as an “African COP.”

Advocacy groups and several world leaders also called for the release of Alaa Abdel Fattah, an Egyptian-British activist on hunger strike in prison since April and declared that he would stop drinking water on 6 November. Amnesty International considers Alaa, along with human rights lawyer Mohamed Baker and blogger Mohamed Radwan “Oxygen” as prisoners of conscience targeted for their peaceful activism. The three were convicted on bogus charges on 20 December 2021 and sentenced to between four and five years. There are fears that Alaa is not receiving adequate healthcare in prison despite assurances from COP27 President and Egyptian Foreign Minister Sameh Shoukry. The activist’s detainment, along with thousands arbitrarily detained, is a cause for criticism and dissent over Egypt’s decision to host the climate conference.

At the sidelines of COP27, protests are held despite the difficulties of a limited social space. Dipti Bhatnagar, a protester from the Friends of the Earth International in Mozambique, criticized the country’s partnership with TotalEnergies for an onshore liquefied natural gas development which has displaced thousands of people from fishing and farming communities and sparked an internal conflict between insurgents in Mozambique and Rwanda, further displacing hundreds of thousands of people.

Yessie Mosby, a Kulkalgal activist from the Torres Strait Islands shared how the persistent negligence of the COP process to listen to the concerns of indigenous peoples is an insult, despite their indispensable role at the forefront in combatting the climate crisis. “The world definitely has a lot to learn from us,” he stated.

“In just days, our planet’s population will cross a new threshold. The 8 billionth member of our human family will be born. This milestone puts into perspective what this climate conference is all about. How will we answer when “Baby 8 Billion” is old enough to ask: What did you do for our world – and for our planet — when you had the chance?

“This UN Climate Conference is a reminder that the answer is in our hands. And the clock is ticking. We are in the fight of our lives. And we are losing. Greenhouse gas emissions keep growing. Global temperatures keep rising. And our planet is fast approaching tipping points that will make climate chaos irreversible. We are on a highway to climate hell with our foot still on the accelerator.

“That is why at the beginning of COP27, I am calling for a historic Pact between developed and emerging economies – a Climate Solidarity Pact.

“A Pact in which all countries make an extra effort to reduce emissions this decade in line with the 1.5-degree goal. A Pact in which wealthier countries and International Financial Institutions provide financial and technical assistance to help emerging economies speed their own renewable energy transition. A Pact to end dependence on fossil fuels and the building of new coal plants – phasing out coal in OECD countries by 2030 and everywhere else by 2040. A Pact that will provide universal, affordable, sustainable energy for all. A Pact in which developed and emerging economies unite around a common strategy and combine capacities and resources for the benefit of humankind. The two largest economies – the United States and China – have a particular responsibility to join efforts to make this Pact a reality. This is our only hope of meeting our climate goals.

“Humanity has a choice: cooperate or perish. It is either a Climate Solidarity Pact – or a Collective Suicide Pact.”

One thought on “COP27: An implementation COP for a climate solidarity pact or collective suicide pact”