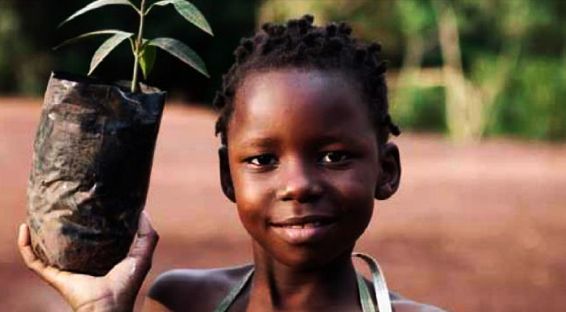 Despite the large numbers of Catholic youth that the Church in Africa is proud of, there exist only few initiatives addressing environmental concerns that are emerging from, and led by, the youth in Africa.  The duty to promote and safeguard the environment is “the responsibility of everyone”, as John Paul II pointed.  This realization was the subtle beginning of the Catholic Youth Network for Environmental Sustainability in Africa or CYNESA.  Inspired by John Paul II’s message for the World Day of Peace 1990, young Catholics from Kenya, Zimbabwe, Tanzania, and South Africa, drawn from and representing university chaplaincies and parish groups, joined up to respond to this invitation.

In November 2011, faith communities from around the world came together under the banner, We Have Faith – act now for climate justice, to champion for a just and robust outcome of the climate change talks in Durban, South Africa.  Young people from several African countries, joined by colleagues from Europe, formed a strong part of this initiative.  Indeed, many youth-led environmental movements are present in Africa, spurred on by the stark reality that Africa suffers enormously from the effects of climate change and environmental degradation.

Young people are now identifying the mission of CYNESA as the platform through which young Catholics across Africa can offer a response to the twin challenges of environmental degradation and climate change, from the perspective of Catholic social ethics, paying attention to the most vulnerable.  Taking advantage of social media that helped move the initiative, the network aims to respond through:

Education and awareness creation, by preparing a toolkit on climate change that draws from scripture and Catholic social ethics.

Networking and advocacy training, by seeking to establish and build relationships with like-minded partners, and to train young Christians in advocacy on environmental sustainability, and to link different initiatives on the continent.

Encouraging and supporting concrete action plans at the local level, by endeavoring to encourage young people to act in their parishes, schools, and within their youth movements by developing appropriate sustainable practices to conserve resources.

We welcome partnerships from other organizations already engaged in this mission in Africa and beyond, and hope that the network can be a tool that builds the Lord’s Kingdom, by caring for His creation.

One thought on “CYNESA, the Catholic youth response to environmental challenges in Africa”