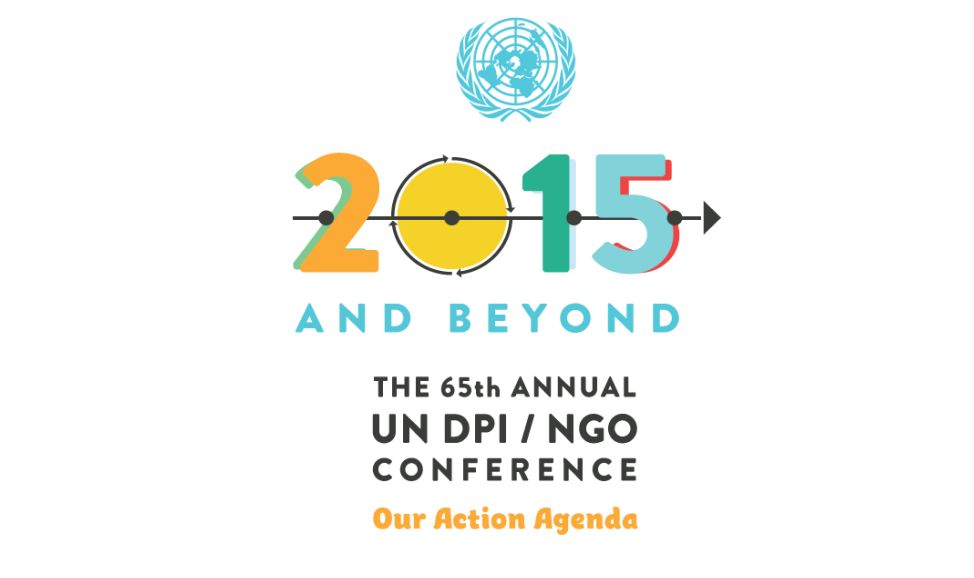 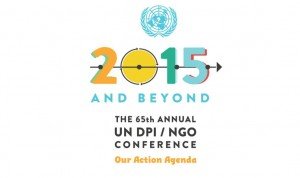 With the youth as an integral part of development, two young adults read the 13-page Conference Outcome Document Declaration of the 65th Annual UN Department of Public Information (DPI)/NGO Conference with the theme “2015 and Beyond: Our Action Agenda,” a distillation of presentations and discussions involving civil society to address the urgent needs of people – and our environment – around the world.

It addresses the specific goals of the recently proposed Sustainable Development Goals (SDGs), following up from the Millennium Development Goals (MDGs). While the MDGs were not reached, it is generally believed that these have served as a very successful mobilizing tool in making substantial, positive strides. It is hoped that the SDGs will do more, that they will motivate governments and civil society to address and solve the compelling problems facing our world, particularly eradicating poverty and achieving environmental sustainability.

This was done on the third and last day of the conference at the UN Headquarters in New York, USA from 27 to 29 August 2014.

Each of the three days held several roundtable discussions as well as a wealth of workshops, the variety and number of which were a little overwhelming to sort through, but spoke to the strong commitment and compassion of so many people who so strongly desire that our world be a better place for others. Over 2,000 people attended this UN conference, including 120 member state representatives. There were also 3.6 million social media “hits” showing the great interest among people worldwide in following the proceedings of the conference.

The World Christian Life Community (CLC)  co-sponsored two workshops, one on Emerging solutions for rising waters impacting the infrastructure of cities globally due to climate change and the other on NGOs and indigenous leaders are key stakeholders in partnership building for the post-2015 development agenda.

CLC member Nicholas Kim, an ocean scientist, spoke during the first workshop. He uses computer modeling to illustrate and predict rises in sea levels due to global warming and the impact on urban areas such as New York City necessitating the building of barrier walls in four rivers around Manhattan. The other speakers were architects, an engineer, and professors at the Earth Institute of Columbia University. The panelists voiced concerns about how the pumping of drinking water and of oil in nearby waters has caused the sinking of already low-lying lands. They shared design plans for projects in areas that experience flooding such as New Orleans, USA; Jiaxing, China; and even Silicon Valley in California where companies such as Google and Facebook are located. Their designs incorporate integrated infrastructure systems – more open land, wetlands, canals, elevated levies, redesign of streets, elevated housing, sheep instead of lawn mowers, areas that harvest rain water, more recreational areas, among others. These design solutions promote housing for the poor, public safety, healthy environments, but they can be expensive and require public policies and financing from both the public and private sector.

The second workshop turned out to be a very lively presentation with young, enthusiastic speakers on using networks of businesses, NGOs, and government to create opportunities for indigenous tribes, young people, women in Africa, and children with heart disease. Sachem Hawk Storm of the Schaghticoke Indian Tribe out of Connecticut and the UN/NGO Representative for Tribal Link Foundation, shared the challenges and hopes of his tribe in the US. He said that many of the problems of indigenous people include poverty, destruction of their homes and environment, and alcoholism. He feels that these problems occur because people lack the understanding of who they are. Ms Jennifer Kushell  founded a company called Your Success Now which reaches out globally to create “a marketplace of jobs, internships, volunteering projects, consulting, franchising “ for young people. Noha Misra works for Solar Sister, a company that strives “to eradicate poverty by empowering women with economic opportunity by providing solar and clean cooking technology with a deliberately woman-centered direct sales network to bring light, hope and opportunity to even the most remote communities in rural Africa.” The value of a workshop such as this came to light when a participant noted the potential for Sachem Hawk Storm’s people to find support for their culture by networking in creative ways with organizations such as those on the panel. Sachem’s reply, “I was thinking the exact same thing!”

Another workshop on Ethical and Spiritual Values and the Sustainable Development Goals advocated for a spiritual dimension to the SDGs. A gap noted in the SDGs is locating where people are in the process and development for whom. Professor Vasisth identified the need to decentralize, to localize, and to ecologize. Also noted among the panelists was the idea that as each of us deepens our own spirituality and religious traditions, we go deeper to the source of all, the One Source. Quoting Teilhard du Chardin, “All that evolves, converges.” As we look to the One Source, there are common values that we all share. So, if we can shine the “spotlight” on these common values rather than on our respective creeds and dogmas, we can experience an awakening of humankind. This way, rather than working within “boxes of identity” which create boundaries and sometimes conflict, we emerge “naturally toward profound interconnectedness.” This is a big shift and it needs to happen fast.

Our CLC NGO representative to the UN, Joan Woods, noted the interdependence of all the various issues in the outcome document for the SDGs. For example, if an indigenous tribe is forced to leave their homeland because of environmental destruction, be it due to rising water levels, nuclear disasters, or deforestation, people then are forced to move. This causes separation of families and they become refugees in other lands where people may not have the skills to succeed. They face poverty. As immigrants, their children are at high risk of not receiving adequate education nor access to adequate healthcare.

Our CLC UN working group was able to meet briefly with the representative from Caritas International, Joe Donnelly. We spoke about possibilities for faith-based organizations at the UN and opportunities to meet and collaborate in the future. Additionally, it is worth noting that there is another branch of the UN that deals specifically with climate change, the UN Framework Convention on Climate Change Convention or the UNFCCC. It was felt at this conference that these branches of the UN and their goals complement and support one another. There will be two UNFCCC conferences in the next year, one in Lima, Peru in December 2014 and the other in Paris, France in 2015. We hope to have CLC members attend side events at these conferences.

There is so much more that could be shared during this UN Conference. It has been a very powerful experience. I noticed a comment on our Facebook page: “as usual all their (sic) going to do is talk about it…and as usual nothing will get done to do anything about it.” This comment does highlight a common frustration. But I have to say that there was a strong sense among the Assembly participants in the call to action to DO SOMETHING!

The Conference Outcome Document Declaration was presented to UN Secretary General Ban Ki-moon during the Climate Summit last 23 September as well as to the President of the UN General Assembly, Mr John Ashe, as he prepares for the next session of the General Assembly that has representation of 193 governments. Both leaders spoke to the Conference via video about the importance and value of civil society. Ban Ki-moon mentioned that NGOs are critically important here because they know what’s happening at the grassroots. He encouraged all of us that we have a “duty to be bold! People want this. The world needs this!”

What can we do?

Know that we do not walk alone. We walk with one another, with Christ, with God’s grace.

Ms Ann Marie Brennan is with CLC-USA and can be reached through her email annmariebrennan(at)yahoo.com.