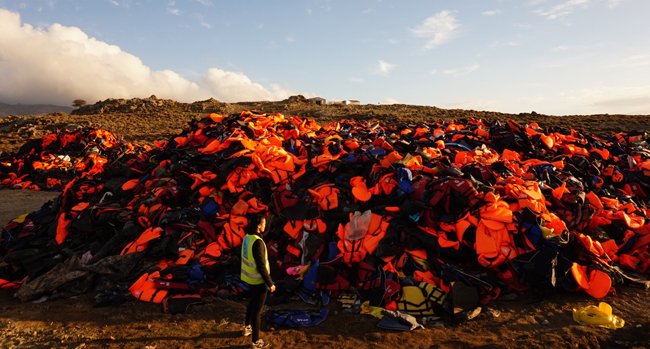 Piled up along the shorelines of the island of Lesbos in Greece are thousands of bright orange life jackets representing the massive exodus of people mainly from conflict-torn Syria, seeking hope and a peaceful life in Europe.  Lesbos is the main entry point in the Aegean Sea for refugees and migrants to Europe and the International Organization for Migration (IOM) estimates that more than 810,000 people crossed into Greece by sea in 2015.

Beyond their life-saving function, these discarded life jackets are also nothing more than tons of plastic, foam, and nylon that accumulate daily, along with the deflated lifeboats (whose outboard engines are scavenged as soon as the boats near the shores) and tire tubes that litter the beach areas.  There is a black market that buys and sells some of the valuables that can be scavenged, but a full-scale waste management plan is clearly needed for what has been described as an ecological timebomb by Greek authorities.  As Lesbos is an island, garbage generation, collection, processing, and transportation to the mainland is a very sensitive issue of great importance.

Karel Zelenka, a volunteer for Jesuit Refugee Service (JRS), worked in Lesbos from late October until mid-March of this year.  He noted that the municipality of Mytilene worked hard to clean up the more accessible beaches, as well as highways along the coast, by removing the discarded life jackets and other waste.  But thousands still remained on the more remote and steep landing sites, he added.

“Many jackets are also floating in the sea.  This situation is best observed if one is arriving in Mytilene by plane.”  Given the rising tension between the local population and asylum seekers as well as non-government organizations (NGOs), “the latter took the initiative to help the municipality get rid of the jackets.”

“This was particularly helpful as some NGOs had special boats (used for rescue) which could access the more remote and steep areas from the sea while their staff would collect the jackets on the shore and transport them to locations accessible to municipal trucks,” he stated.  Coordinated by the UNHCR, this clean-up became a weekly “discreet” event because “no publicity was given to the effort,” explains Karel.

In his opinion, the clean-up has been effective, and starting this year, this has been helped in part by the steadily decreasing number of migrant and refugee arrivals.  He also noticed that “the used jackets were being taken to a plant where local entrepreneurs make them into mattresses for use in refugee camps, but I am not familiar with results of the effort.”

The municipal government has initiated plans for a recycling program with support from the Greek Ministry of Environment and has also started a pilot project with volunteer architects and environmentalists.  Apart from cleaning and clearing the landscape and the surrounding environment, revenues for local people and small businesses can be generated.