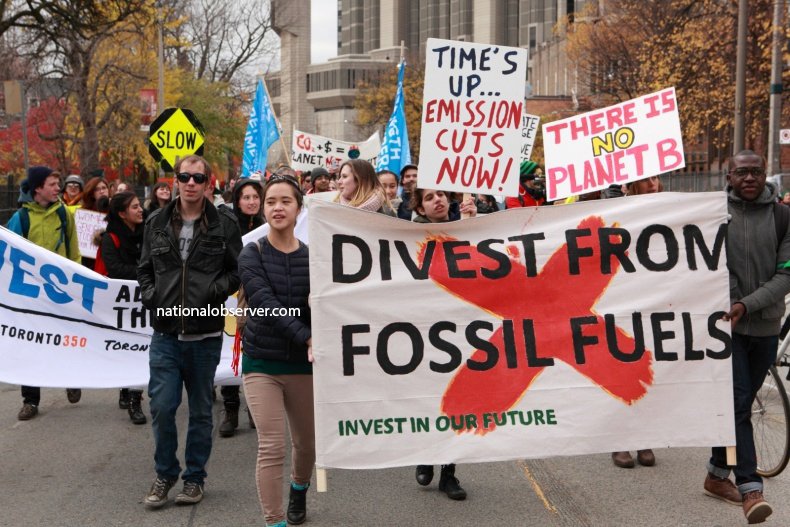 Divestment : Investing in Creation from Andres Ignacio on Vimeo.

Movements to divest from fossil fuel investments in different parts of the world is gaining momentum.  With 70 percent of the carbon driving climate change coming from the use of fossil fuels globally and sustained by 90 corporate and state entities.  These carbon majors are responsible for an estimated 65 percent of all greenhouse gas emissions from 1751 to 2013.  Drastic reductions are needed and transitions started.  As well, there is a need to respond to the human rights abuses occurring in many resource-rich countries in fossil fuel extraction, as well as to the land and water degradation.

The Jesuits in English Canada, Italy, and Australia joined the global movement in fossil fuel divestment while in a related concern on shifting to clean energy, South Korean Catholic priests and nuns take the lead in protesting against nuclear power.

In a first-in-the-nation step towards divestment, the city of New York in the United States announced last month its plan to divest within the next five years the city’s pension funds of roughly US$5 billion held in the securities of over 190 fossil fuel companies.

Divestment means ethical investment, and by excluding fossil fuel companies from the investment schedule of institutions, they are being combed out of such secure investments.  New York City’s decision highlights the urgency and importance of moving away from our reliance on fossil fuels such as coal, oil, and gas which are main contributors to greenhouse gas emissions and climate change.

However, “politics and business have been slow to react in a way commensurate with the urgency of the challenges facing our world.” (Laudato Si’ [LS] 165) And climate change is not merely a global environmental problem, but a social one which needs action now.

An increased frequency over the last few years of seasonal variability and extreme weather events such as typhoon Haiyan in the Philippines, and severe droughts across Africa show the need for urgent and common action.

Pope Francis reminds us that “(t)he myopia of power politics delays the inclusion of a far-sighted environmental agenda within the overall agenda of governments.  Thus we forget that ‘time is greater than space’ – that we are always more effective when we generate processes rather than holding on to positions of power.” (LS 178)

This is precisely the challenge to us all: to form processes in society for care of creation, inclusive of neighbor.

One of the primary signs of the times is climate change, wherein we have to act collectively.  The core of climate change is the use of fossil fuels.  “We know that technology based on the use of highly polluting fossil fuels – especially coal, but also oil and, to a lesser degree, gas – needs to be progressively replaced without delay.” (LS 165)  However, “politics and business have been slow to react in a way commensurate with the urgency of the challenges facing our world.” (LS 165)

Typhoon Haiyan, the drought in east Africa, weather events passing through the Gulf of Mexico, melting of the Arctic ice, along with seasonal variability and the increasing frequency of these weather extremes, have not combined before in such a particular relation.  So even if science cannot as yet absolutely tie any one event to burning of fossil fuels, the high percentage of certainty of these extreme events happening needs solutions way beyond the initial call for use of the precautionary principle.  Climate change is a global problem that needs action now, and “interdependence obliges us to think of one world with a common plan.” (LS 164)

“The climate is a common good, belonging to all and meant for all.” (Laudato Si’, 23) Climate change is seen as a reality in the suffering of the economically and socially marginalized.  Concern is great in the Amazon and Congo Basins, Asian tropical forests, and in the state of our oceans.  All these are integrally connected to the economics driving fossil fuel extraction.

For vulnerable people, exposure to the extremities of climate events, whether droughts or floods, is disastrous and the loss of life and livelihood are all seen to connect back to the burning of fossil fuels.

Mining of these and other resources in different parts of the world has resulted in the destruction of numerous indigenous communities and the death of many, where there is no recognition of their rights and relationship with the land.

If we do an ecological examen of our relationship with Christ and creation, we humbly know that we must reduce our impact and join others in action for change.  We are called to discern together and to act through our institutions, in our countries, and in our global networks.

Numerous governments and institutions have answered the call, and there are over 850 in a list compiled by gofossilfree.org.  Hundreds of other Catholic organizations worldwide have banded together in solidarity through the Global Catholic Climate Movement (GCCM), a global coalition working to respond to climate change.  Through the advancements of the GCCM, the Catholic Church made the largest ever faith-based divestment from fossil fuels in 2017, and this year made their announcement on Earth Day.

Fossil Free, a global campaign project of 350.org led by local groups demanding the end of fossil fuel use and fast and just 10% transitions to renewable energy, provides a list of fossil fuel divestment commitments by over 800 institutions globally, and cited 2018 as the “year of mass divestment” with a flurry of announcements from Europe setting the tone.  Paris in France announced in February that it is exploring the possibility of suing the fossil fuel industry for being the leading cause of climate damages.  The results of a landmark inquiry initiated by the Commission on Human Rights of the Philippines seek to highlight the negative impacts of climate change to human rights.

Many schools around the world – centers of learning for this generation – are also beginning the shift to green energy and climate action. Universities and parishes are tackling their environmental accountability.

Jesuits are strengthening a protocol for disaster risk reduction to address the plight of those in the margins who suffer most as a result of extreme weather events.

Jesuit institutions are seeking to reduce their carbon footprint through collaborations as with Flights for Forests.

We are gradually leading by example and cleaning up our own habits, but we need to do more.  We need to clean up our own institutional portfolios to encourage the spread of green energy.  We need to advocate for a critical response in the business world through influencing investments.  We need to support coming generations through the collective drive for divestment from fossil fuels and re-investment in an economy that cares for more than cash.

The process of divestment requires sustained efforts to enable others to stay with the challenge.  This is what the social apostolate does well through awareness and action.

Divestment means ethical investment.  This has been done before for arms and nuclear investments in the 1960s and ‘70s.  With climate change, the ethical questions for us are:

Saying yes to these questions means challenging asset managers or financial committees in our universities and centers to explore the divestment process, which may come in two stages.

In the first stage, the initial focus for divestment would be companies not willing to change their substantial involvement in fossil fuel extraction.  These companies have the highest exposure to carbon risk and are unlikely able to sufficiently diversify in the short term.  The effort is to get our institutional investment portfolio managers, through our financial committees, to weed out the top 10 fossil fuel companies from any Jesuit institutional investments.  This is called Tier 1 action.

Tier 1 is one of four Tier categories of the top 200 companies listed in the Australian Securities Exchange (ASX200) “according to their exposure to fossil fuels” to develop portfolios that can “screen out the most fossil fuel-exposed companies” that was developed by The Australia Institute (TAI).  They released a paper on March 2014 Climate proofing your investments: Moving funds out of fossil fuels that dealt “with issues that arise for ‘mezzanine level’ institutional investors – religious investment groups, universities, foundations and state government authorities considering the imposition of a carbon emissions intensity-related screen on their investment portfolio and/or support for shareholder actions aimed at improving climate change responses.”  According to TAI’s paper:

Once this is achieved, the second stage is to identify indirect investments through the likes of health and retirement funds.  The challenge is to divest from direct ownership of any managed funds that include holdings in fossil fuel companies.

By excluding fossil fuel companies from the Investment Schedule of our institutions, we send a message back that they are being combed out of such secure investments.

Divestment is one strategy that can pull many things together; it can unite us more in caring for creation.  Divestment also challenges us to do more responsible institutional audits, as well as personal audits.  This gives the social apostolate a critical focus and a greater ability to enable others, including the Church, to participate in being the occasion for change.

This article is based on a nine-minute video that Ecojesuit prepared and can be viewed here.