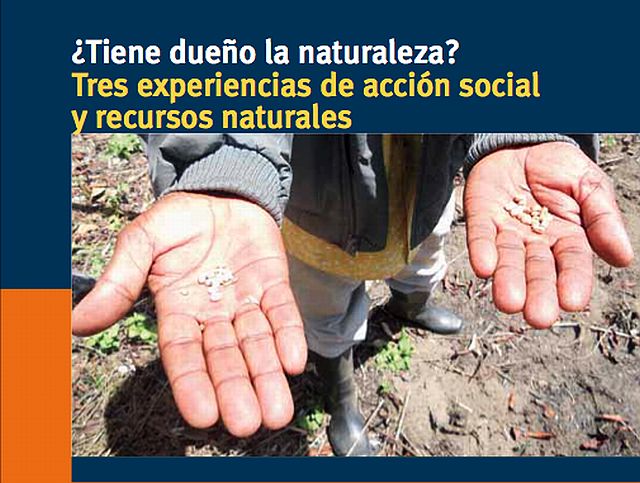 In every society there is a deep interdependence between social life and the natural environment.  In fact, the matter of natural resources and, specifically, of how the ownership of those resources is determined and how its use is regulated, has been and is still an essential element for the construction of society.  During the past decades, the intensification of the process of globalization and the strong expansion of the world economy strengthened the importance of natural resources management.

Thirty years ago, the economists assured that the economy tended to dematerialize and that knowledge would become more important than control over natural resources.  This, however, has not been the dominant trend.  The importance of knowledge and information has grown as much as the unprecedented increase of the demand for natural resources.  As it has already happened before, pressure on the resources affects immediately the regulations for their exploitation and use.  In this context, it is important to wonder how the changes related to the control and use of natural resources affect the populations who have traditionally used those resources.  It is also important to carry out this analysis from the perspective of the population directly affected.

In the urban and hyper-technified environments of the rich old world, but also among the privileged classes in the emerging countries, there is a growing trend and temptation to forget that nature is, with no exception, the essential support on which the life of all people is built.  It makes up the substrate of material economy, which depends closely on natural resources in order to function.  However, the verification of the society-natural environment interdependency is still very present for the people who depend mostly on natural resources for their material, cultural, and spiritual survival.  The problems they face and the ways in which they organize themselves to defend their territory, claim their rights and suggest alternative ways to conceive the ownership and management of “natural resources.”1

As it has happened before throughout history, there are currently intense conflicts related to the access and use of natural resources, as well as about the control of the territories where these are.  This time, however, the scenario is planetary and the intensity is reaching a dangerous threshold of unsustainability.2  The cases we’ll introduce illustrate some of the most relevant and visible aspects of this contemporary phenomenon of conflict associated to the expansion of international economy: (i) territories coveted by industries which make an intensive use of the land and the resources (extractive, hydroelectric, forest, agricultural, and extensive farming industries); (ii) vulnerable populations subjected to increasing pressures; and (iii) strong presence of criminal or quasi-criminal networks (like drug dealers and “mafias” of all kinds).

These cases also help to understand how collective action is being organized to face this kind of scenarios: from the weakness of miners’ action in Katanga, to the approach to resistance and defence of the territory, identity, and world vision in the communities of Ixcán, and the ”selective fight” the adivasi population in Guajarat is leading to claim their forest rights.  The three cases reveal the wide diversity of collective actions that are being carried out to face these problems, a diversity explained by factors such as: (i) the kind of economic activity and its associated resource; (ii) the geopolitical interests at play; (iii) the strength or weakness of the State in that territory; and (iv) the degree of existing unity and group-awareness among the affected population.

The organizations that work for the sake of solidarity are committed to accompany the populations deprived of their resources, or whose resources are being threatened.  That is why it is so important to understand the factors that strengthen the capacity of those populations to organize and defend themselves, and to suggest a fairer and more sustainable management of the territory and its resources.  In fact, the involvement of organizations which promote development and international justice is ever more frequent in researches and projects related to environmental justice and sustainability with the promotion of human rights and human development.3  Though this involvement is not new, it is gradually acquiring new nuances as the climate crisis and socio-environmental conflicts worsen.

1. For a better approach to this subject, we recommend watching the video presented in 2011 by Alboan: ¿Tiene dueño la naturaleza? (Does nature have an owner?)

3. Recent examples of this involvement are listed below.  The publication of these reports was also part of the context of preparation for the 20th anniversary of the Earth Summit, also called Rio+20 Conference, in Rio de Janeiro, Brazil in June 2012.

a. UNDP’s 2011 Human Development Report, Sustainability and equity: A better future for all

b. Social Watch Report 2012 Report Sustainable Development: The right to a future

c. Oxfam Report number 157 published in January 2012, Left Behind by the G-20? How inequality and environmental degradation threaten to exclude poor people from the benefits of economic growth

d. Report by the Social Justice and Ecology Secretariat of the Society of Jesus published in 2011, Healing a Broken World by the Task Force on Ecology.