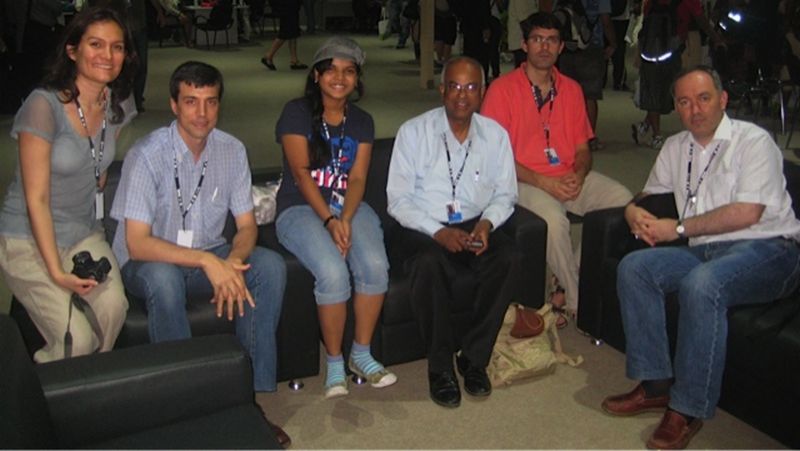 Ecology and Jesuits in Communication or Ecojesuit  was launched as a monthly online newsletter in November 2010 and was a first significant action from the Global Ignatian Advocacy Network (GIAN) Ecology which emerged from the Social Justice and Ecology Secretariat after GC35. Ecological concerns were identified as one of the five major global challenges that need responses and action, the others being migration, the right to education, peace and human rights, and governance of natural and mineral resources.

Ecojesuit aims to promote amongst Jesuits, Jesuit institutions, Jesuit friends and colleagues a greater awareness of our ecology and our responsibilities for how we live, the urgent need for deeper and more sensitive formation and engagements, and a development of a broader global basis for action. In contributing to healing a broken world, Ecojesuit is designed to be an online communication platform for commentaries and reflections on contemporary ecological and social concerns that can be a basis for further action and response. Ongoing initiatives and activities that are sources of learning, further information, and exchange of good practices are also shared. Written in English and Spanish, the intent is to reach a broad base of readership globally through its four regular sections: editorial, reflection, programmes and projects, and news and events.

By the following year, the number of subscribers steadily grew, reaching over 1,100 subscribers in September 2011. Frequency was also increased and Ecojesuit transitioned from a monthly to a fortnightly publication starting February 2012. The Ecojesuit Facebook page was opened on 30 October 2012 and a Twitter account, @Ecojesuit, began tweeting on 29 November 2012. In June 2013, a new section focused on youth was explored, Global youth accompanying communities, acknowledging their role as the next generation who will be faced with the challenges of ecological concerns.

Ecojesuit also took part in global events that dealt with environmental concerns, such as the Rio+20 Earth Summit in June 2012  and the 2013 UN World Water Day Campaign , within the framework of the Millennium Development Goals.

More recently, Ecojesuit established its own site on Wikipedia, and is now referenced as a source on Google Scholar, with over 50 websites citing or mentioning Ecojesuit’s content.

There is an increasing recognition of Ecojesuit as a relevant communication platform which informs and disseminates concerns about water, mining, food security, climate change, disaster resilience, energy, and indigenous peoples. One of the most valuable points of the Ecojesuit newsletter is that it provides exclusively original texts and articles.

As of November 2013, Ecojesuit has 1,935 subscribers (1,116 in English and 852 in Spanish, the rest subscribing to both), 590 likes on Facebook, and 1,158 Twitter followers around the world. A diversity of authors contributed, such as university professors, parish priests, researchers, students, teachers of primary and secondary schools, Jesuits, and environmental professionals from a multitude of social and research centres, civil society organisations, universities, and schools.

After three years, Ecojesuit undertook a self-evaluation to review the work done so far and also to think about further improvements to face new challenges. We realise that Ecojesuit is becoming a “meeting point” for different people from different backgrounds and realities who share similar concerns about creation, which is one of Ecojesuit’s goals. But this is not enough and we recognize the need to add more languages beyond English and Spanish to reach more people who also want to share and contribute.

At the same time, we also recognise the need to build more bridges with other, similar initiatives from other faiths and beliefs, from civil society, and from the academic world. As Johan Rockström expressed during a meeting with us, we share common concerns and our alliances will multiply the values that we need in order to turn over the unsustainable development that we are conducting right now and we have to touch all people to let the environment guide our development.

Here at Ecojesuit, we thus renew our commitment to all who supported this effort since the beginning, but especially for those who are suffering the consequences of this broken world.