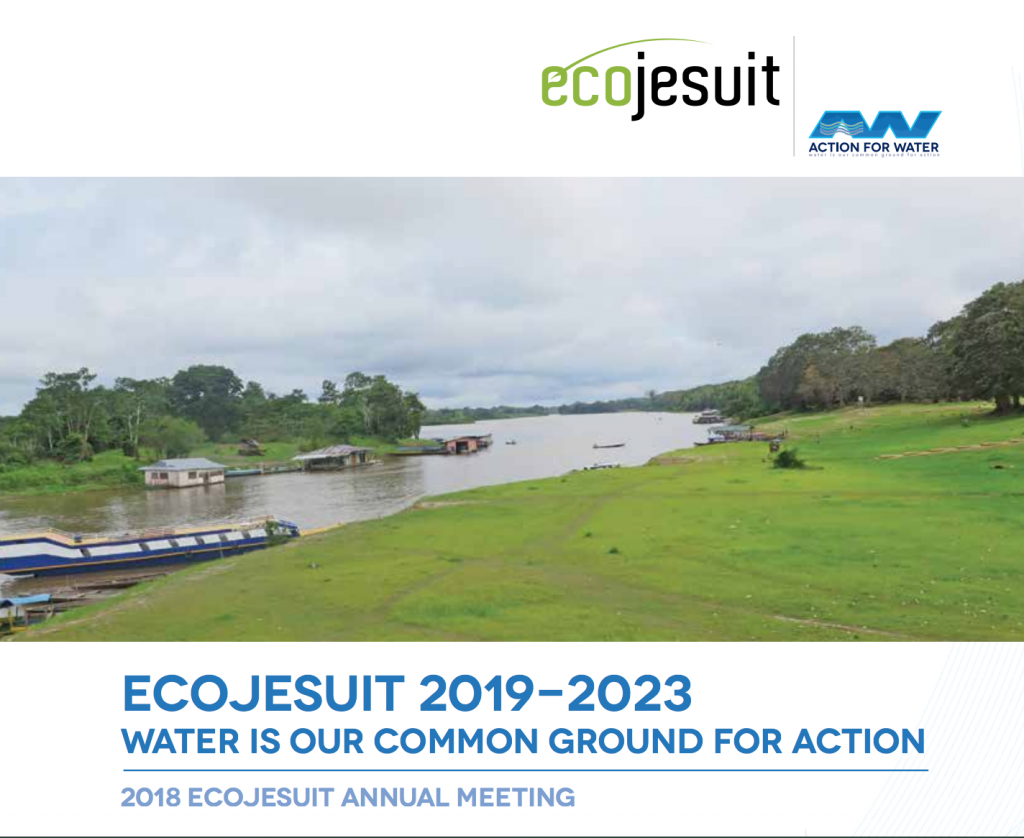 Ecojesuit, the global ecology network of Jesuits and partners seeking to discern an integral ecology as the basis for action, gathered in Leticia, Colombia in August 2018 for its annual meeting.  The meeting sought to update and strengthen the Ecojesuit network to bring about energetic solutions in moving identified ecology themes for collaboration across and out through the different Conferences, given new commitments of Conference Presidents and Social Apostolate Delegates.

Operating under the Social Justice and Ecology Secretariat, the three-day meeting was a venue to share and discuss contemporary global and local water concerns as well as updates on regional and local actions from each Conference.  An initial five-year (2019-2023) strategic plan for the Ecojesuit network was discussed and drafted.

The Ecojesuit annual meeting also brought together ideas to strengthen areas for collaboration, encourage local actions in the different regions reached by the network, and deepen understanding of the urgent and diverse water concerns globally through the unifying theme Action for Water: Care and Defend.  As affirmed in the Rome meeting of GIAN leaders in April, Action for Water was pursued as a unifying theme for ecological responses.

Water is always central to discussions of environmental and social impacts.  Its value as a tagline lies in water’s universal connectivity, from disaster risk reduction in Asia Pacific to droughts and food production in East and South Africa and to land-use changes in the Amazon and Congo Basin.  The water themeis not intended as a way of limiting focus on other works, but as a means to weave together activities.  Incidentally, the UN has declared 2018-2028 as the International Decade for Action on Water for Sustainable Development.

Colombia’s willingness to host the annual meeting was considered by Ecojesuit members to be a welcome development and helped in the efforts to build new relations and further understand the ecological and social programs and initiatives of the Conferencia de Provinciales en América Latina y el Caribe (CPAL) and its institutions.  With the Ecojesuit annual meeting held in the area of the Jesuit mission in Leticia, opportunities were explored to deepen relations with Latin America and how they can collaborate and contribute new life to Ecojesuit, as Latin America has not been able to strongly participate in the past.

On 1 August, the Ecojesuit team met with the leaders and faculty of Pontificia Universidad Javeriana (PUJ) and local actors from the social sector in Bogotá in a dialogue that CPAL organized.  It was a day of sharing and learning about the different initiatives and strategies in the Amazon Region, and to explore and identify potential areas for collaboration.

A conversation with Mauricio López, Executive Secretary of the Pan-Amazonian Ecclesial Network (Red Eclesial Panamazónica or REPAM) highlighted the urgency of the work needed in the Amazon, especially where actions can contribute to the Special Assembly of the Synod of Bishops of the Pan-Amazon Region in October 2019.  The Synod is oriented towards a territorial approach and Ecojesuit can assist in moving this territoriality, as there is now REPAM for the Amazon, the Ecclesial Network of the Congo Basin (Réseau Ecclésia pour le Bassin du Congo or REBAC) for the Congo Basin Forest, with an emerging network in Asia Pacific for its forests, lands, and people.

Depth in the way forward and support from the Conferences

Participants to the meeting sought empowerment so that the ecology agenda in each Conference and social, education, parish apostolates are enhanced and strengthened, guided by a unified and common ecological framework yet allowing for different local contexts and points for collaboration at various levels.

The Ecojesuit annual meeting thus sought to engender within the network a deeper trust among its  members already established with the regular webinars, generate a sustained commitment to undertake the actions, and support specific collaborative functions that are learning opportunities.

It is also evident that a redesigning under the Conferences is needed with deepened commitments of “passion, focus, and energy.”  As a network gathers strength through its linkages, support from the Conference level is essential for Ecojesuit to move forward with increased vigor.  This entails an established system of Ecojesuit-Conference governance with open participation, sustained and active communications, and a means of accountability and responsibility.

These are the elements of the draft five-year strategic plan that is the key output of the annual meeting and will serve as a roadmap on how the ecology network will proceed as affirmed in the April 2018 Rome meeting and as a response to the Universal Apostolic Preferences.

This proposal is a response to the broad call articulated in Laudato Si’ and also in General Congregation 36 for greater “collaboration among Jesuits and Jesuit apostolates through networks.”  By fostering connections locally, regionally and globally, significant contribution to greater reconciliation in the world can be generated.  “We are all connected (LS 16, 42, 70) and it is by building relationships that we can attain a ‘new and universal solidarity’ (LS 14) for our common home.”

The 2018 Ecojesuit Annual Meeting report can be accessed in Ecojesuit online.