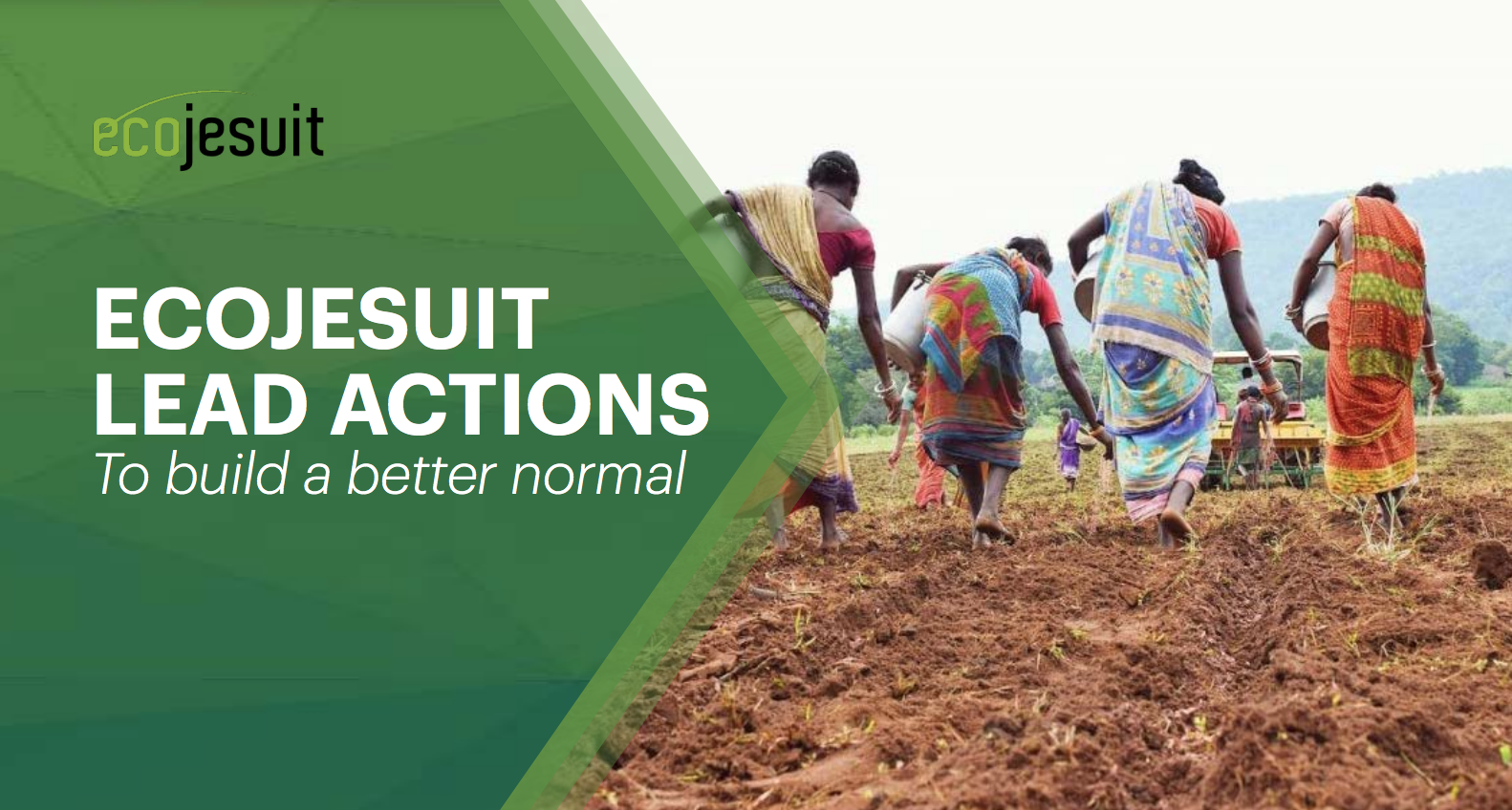 Ecojesuit contributes to a better normal through its Lead Actions that emerged out of two months of focused dialogues early this year with the six Jesuit Conferences, providing the basis for more solidarity and strengthened collaboration towards integral ecology. Key commitments are taking shape and a new brochure, Ecojesuit Lead Actions to build a better normal, developed for greater cross-Conference communication.

A primary focus area is Lead Action 1: Connect agriculture and entrepreneurship and together with Santa Clara University in California, US and the Jesuit Conference of South Asia, a dialogue series was started to promote food and agriculture systems for the common good. An initial webinar, Agroecology for Food System Change: A dialogue series on life, land, and livelihood on 19 November highlighted North and Central American community experiences and actions. Globally renowned ecologist and environmental advocate, Dr. Vandana Shiva, joined the panel and presented a global overview of agroecology as a response to the pandemic and food systems change. Future sessions will be organized in early 2021 focusing on Africa, Latin America, and Asia.

Complementing this effort is Farm for Care, an online platform Ecojesuit recently developed to encourage dialogue and exchange around agroecology and food systems. On-the-ground practitioners, students, entrepreneurs, small farmers, alumni associations, professors, experts, and all those interested are welcome to join these conversations towards developing local-global solutions and communities of practice. Interested platform participants are invited to share their local experiences and materials, ask questions, and propose ideas for collaboration.

Engagements around the other Lead Actions are also taking place. For Lead Action 2: Address social-economic-environmental integrity in the face of deepened poverty– business as usual-environmental degradation, Ecojesuit supported the open letter of Xavier Network and the JCAM Justice and Ecology Office to European leaders regarding the postponed COP26. The letter that shared their concern that the preoccupation with the ongoing pandemic might lessen efforts to globally tackle climate change.

For Lead Action 3: Advocate for climate action, human rights, and the contribution of Indigenous Peoples, Ecojesuit supported the launch of the Ecclesial Networks Alliance for Integral Ecology and the River above Asia Oceania Ecclesial Network (RAOEN).

Other initiatives in relation to the Lead Actions include the promotion of Conference- and locally-led efforts such as Eco-bites, the ecology newsletter of the Jesuit European Social Centre, the webinar series on integral ecology by the social centers network (COMPARTE) of the Jesuit Conference of Provincials in Latin America and the Caribbean (CPAL), the youth dialogues on environmental stewardship and care that FLACSI (the Latin American Federation of Schools of the Society of Jesus) organized, and the tUrn Climate Week of Santa Clara University.

Global collaborations with the Social Justice and Ecology Secretariat and other networks are also taking place such as the Breathing Together Global Ignatian Prayer Vigil during the Season of Creation where Ecojesuit contributed video reflections from the Asia-Oceania contexts, the ongoing support to share widely and strengthen the calls for justice for Fr. Stan Swamy SJ in India, the deepened communications through the Jesuit Network platform, and support for young Jesuits through monthly dialogues on ecological conversion.

The Ecojesuit Lead Actions to Build a Better Normal brochure is available in English, Spanish, French, and Portuguese.