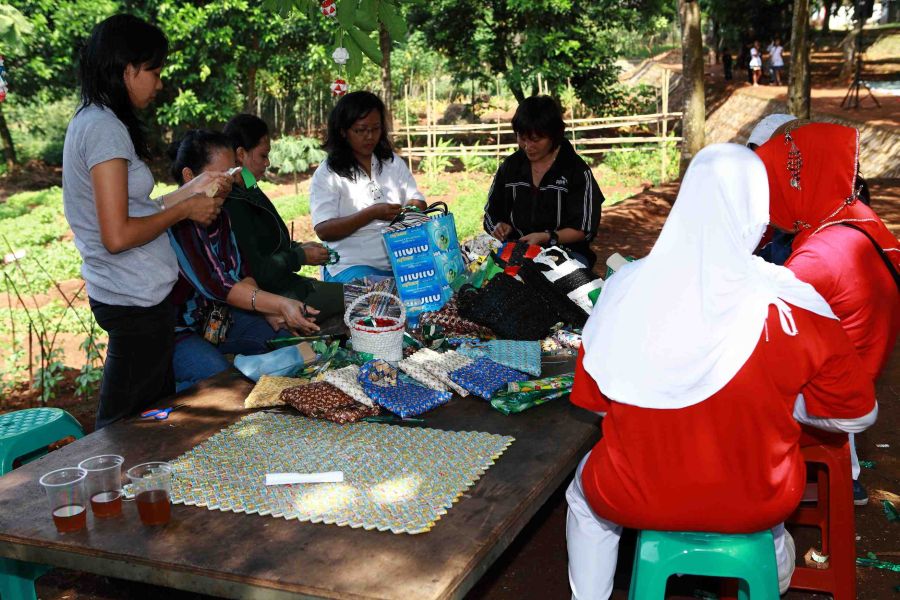 It was during SAGKI (Sidang Agung Gereja Katolik Indonesia or Grand Assembly of the Catholic Church of Indonesia) 2005 that environmental awareness and taking action to prevent ecological destruction, among others, were recommended as main concerns of the Church since that year.

The SAGKI prompted the Archdiocese of Jakarta to respond by establishing the Movement of Clean and Healthy Life that is focused on garbage management.

The problem of garbage is a huge and complex.  According to data published by the Office of Cleanliness, garbage in greater Jakarta packs the city as much as 6,000 tons per day.  Garbage in Jakarta is composed of 65% organic material and 35% inorganic and chemical material.  More than half (60%) comes from domestic waste.  The most critical challenge lies in the area of garbage management. The Catholic Church, as a part of larger society, should take part and respond to this challenge.

This is a long-term commitment by the Archdiocese of Jakarta that identified environmental concerns as entry points in responding to social problems in Jakarta.  Building the system and structure was initiated and 80% of the 62 parishes in the diocese have set up a sort of Bureau of Environment.

Fr Alexius Andang L Binawan. SJ, coordinator of the Movement of Clean and Healthy Life, recently shared the broad meaning of the Lenten season.  The Catholic Church defines this period as a time of repentance.  What does it mean by repentance from sin today when marked by the threat of environmental damage?  We must feel sorrow from our ecological sins, expressed in people’s behavior that exploits Creation unsustainably.

The conversion, nevertheless, is not merely passive remorse but rather is an active, positive action.  Fr Andang points out three kinds of conversion: personal, structural, and symbolic.  Maintaining the habit to segregate organic and inorganic garbage is an act of personal change.  Building a community and social movement, like organizing and monitoring the practice of waste management in parishes or dioceses is a manifestation of structural conversion.  Planting and cultivating trees around our houses and our church can be symbolic conversion that proclaims our broader awareness about global warming.

Some people in St Barnabas Parish Pamulang in Jakarta’s suburb put the conversion into practice.  The parish allocated 1.3 hectares for building the new church, but the plan turned uncertain in 2009 and through the discernment between the Movement of Clean and Healthy Life and the parish boards, the area was converted into the Garden of Environmental Awareness (Kebun Sadar Lingkungan or DARLING).

The DARLING project runs activities in education for agriculture, husbandry, fishery, and integrated organic waste management.  Further actions were undertaken through collecting garbage of Catholic families and others alike.  Emyliana, one of the coordinators, is convinced with this program and shared her reflection, “Serving our Lord by caring for Mother earth.”

There are two fundamental concerns about ecological conversion, as explained further by Fr Andang.  First, people should be able to overcome apathy and greed.  A person-centered paradigm should be transformed into one where Creation is the focus.  And secondly, Creation must be maintained in a balanced ecosystem that is compromised by human greed.  Efforts must be taken to ensure that these concerns are understood so that ecological conversion is possible.

Greg Soetomo SJ is editor-in-chief of the Jakarta-based HIDUP, a Catholic weekly magazine that explores the social dimension of Christian faith.  He is also a communicator in the Jesuit social apostolate in Indonesia.  He can be reached through his email address: gsoetomo(at)hotmail.com.