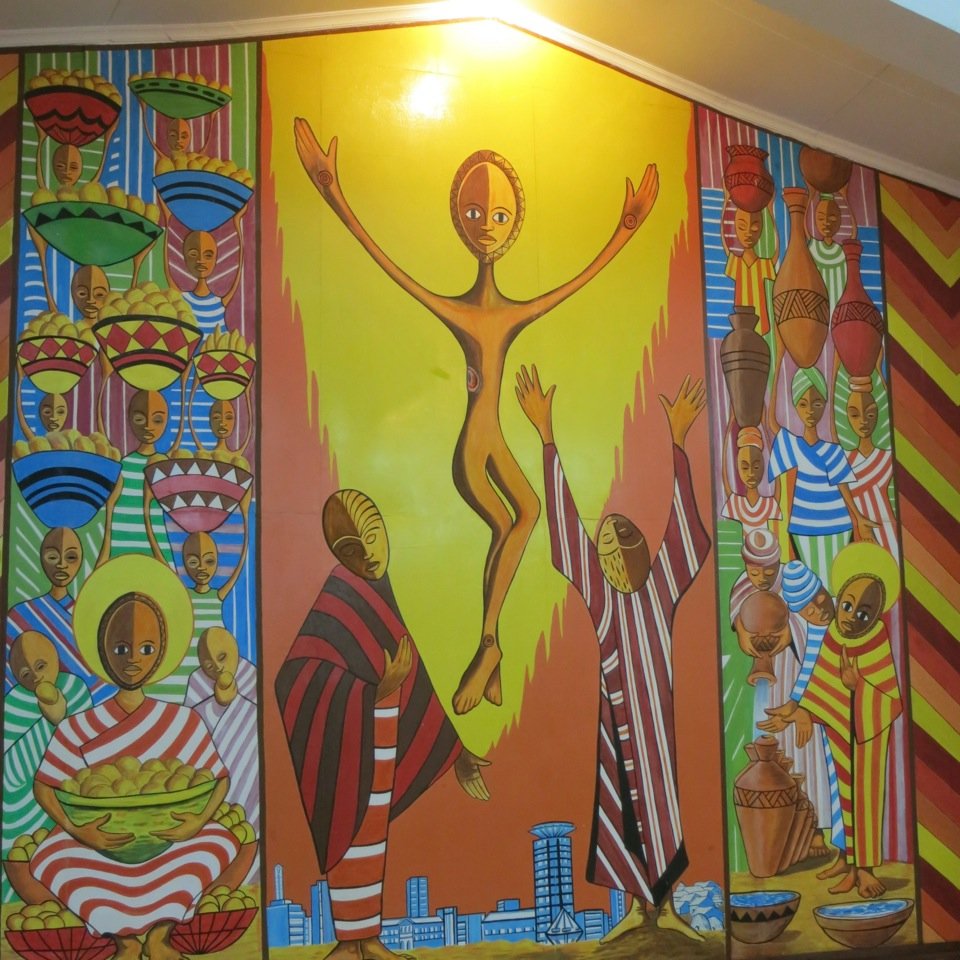 The Jesuit African Social Centers Network is responding to ecological concerns in the region by promoting awareness among Jesuits and their collaborators about ecology, supporting interest in the field of ecology, and encouraging transformative education to create responsible attitudes to safeguard Creation. The network is composed of 30 social centers of the Jesuits of Africa and Madagascar (JESAM) Social Apostolate, and for which ecology is one of the six themes identified where activities are focused. Three activities in November and December 2014 were undertaken to assist the network in their continuing work and focus on ecology.

A training seminar on ecology was held in Nairobi, Kenya, from 24 to 28 November 2014, wherein they invited Pedro Walpole, SJ as the lead facilitator. The activity has four objectives: to increase knowledge, promote awareness, obtain an understanding of the root causes of ecological problems and their consequences, and strengthen commitments to reduce the effects of the environmental crisis on the poor and marginalized.

Pedro added a fifth objective, and that is to link ecological question to values, in order to promote and encourage positive attitudes to safeguard creation. He recalled the recommendations of Healing a Broken World, the document developed by the Task Force on Ecology in 2011.
Apart from the need for interiority, the nine planetary boundaries were also discussed: climate change, loss of biodiversity, ocean acidification, change in land use, global use of freshwater resources, stratospheric ozone depletion, atmospheric aerosol depletion, nitrogen and phosphorus cycle, and chemical pollution.

Taking part in this commitment, participants agreed to regularly update and include issues of ecology in their reviews of the apostolic plans and commitments. Participants also organized working groups to develop four lines of action: production of a toolkit on climate change, writing a guide to raise awareness for various sectors of the Jesuit apostolate (schools, parishes, chaplaincies, formation houses, retreat houses, among others), preparation with GIAN Ecology of the African Water Week, and production of a guide for an ecological retreat. Participants pledged to finalize these tools not later than April 2015.

At the end of the training the participants they measured the urgency to act now, especially in the promotion of backup attitudes of the planet. They acknowledge the value of living simply, and are convinced that the change will be the result of the personal commitment of men and women today. Thus, they suggested to the Jesuits and their collaborators to continue to build on the report Healing a Broken World.

During the same period, the Catholic Youth Network for Environmental Sustainability of Africa (CYNESA) gathered 34 participants from 21 Catholic parishes last 29 November, and that also included believers from different churches that are not Catholic. CYNESA welcomes all youth and partners who have an appreciation of the Catholic faith and its social teachings.

In a CYNESA blog by David Munene, he wrote that the youth were engaged in an insightful presentation by Pedro Walpole about the need to heal a broken world as a transformation of mission and ecology through an attitude of gratitude and simplicity, grounded in caring and capacity to engage. He underscored that the ‘ecological crisis is no longer about how much we know, but being consciously aware of the damage done and challenge to change.’

The signs of the times include the planetary boundaries, social and economic exclusion, and inexpression of the human spirit but the youth were reminded that all of us have ‘the intellect and spiritual discourse to see ecology as mission and have the heart to heal.’”

The environmental concerns in Kenya were integrated in the presentation, focusing on pollution, deforestation, poaching, and the water crisis. He also engaged the participating youth in sharing the challenges they face. Offering practical case studies from Mindanao, Philippines where he works with the local community, Fr. Pedro also asserted that there was a need to engage students in transformative education. According to him, transformative education ‘recognizes the need to go beyond academic boundaries to improve the capacity to integrate knowledge at many levels’ and ‘seeks to get away from textbook learning; to get into the community, to provide a lived understanding and a basis for action.’”

Towards the end, the youth were encouraged to:

Seminar on ecology at the Jesuit Novitiate in Arusha, Tanzania, December 2014

A few days after, novices from five religious congregations with formation houses within Arusha, Tanzania gathered from 1 to 3 December 2014 at the Jesuit Novitiate for a seminar on ecology where the framework was hinged on the tripartite way of proceeding of seeing, judging and acting.

Simplicity and reconciliation were appropriate stances toward a broken world in need of healing. It was pointed out that opting to apportion blame in ecological and environmental concerns still left problems unsolved. Environmental spirituality was suggested as an appropriate means of perceiving man as a microcosm of the universe. Pedro Walpole shared that developing an interior tranquility would form a base for changing individual attitudes way before considerations are made regarding lobbying governmental bodies and institutions. Participants were also acquainted with documents from the General Congregation 35 that provided a glimpse of the gradual shaping of the Society of Jesus’ concern and involvement in the ecological frontier.

On the second day, participants engaged further in solid ways of addressing an ecological concern. It emerged that grandiose and lofty approaches – those counting on the action of national and international bodies – require elaborate and multifaceted forms of advocacy. However, before such actions are mounted, a change in attitude needs to be effected in oneself. Allen Ottaro of CYNESA presented an example of such a change in attitude that bore fruit in Malawi.

The final day began with the addressing of concerns raised with regard to technical terms raised in previous sessions. Recurrent phrases in ecology such as the ozone layer and greenhouse gases were explained. This served to foster an understanding of other key terminologies – biodiversity, simplicity and being earth’s steward – that informed the participants’ group discussions. With the facilitation of Jean-Christian Ndoki, SJ, participants were also shown around the novitiate’s sustainability projects that included the following: vegetable gardens, animal husbandry sites, the biogas production unit, and the orchard.

The seminar was concluded with presentations that emerged from the group activity which was the interrelatedness of the various sustainability projects in the novitiate. Each project was evaluated in terms of its consumption, output, and degree of interrelatedness to other projects. From this, a flow chart depicting the existing harmony of the units was developed. Participants were challenged to keep re-evaluating the developed flow chart for further improvements to the whole. Infused in the three-day seminar was the conviction that as earth’s stewards, we are called to find God in all creation and that we are called to bestow on later generations a healed world, not a broken one.

The challenge in Africa

In the African Conference Report on Ecology, Fr Rigobert Minani, SJ writes that even if it does not draw enough attention, the environmental problem is a key challenge to Africa today and tomorrow. Despite the fact that Africa possesses wealthy natural resources many Africans live in poverty unable to benefit from the African wealth. Africa has a vast majority of poor states and regions, and poverty is a major reason and consequence of the environmental degradation. In general a vast majority of countries in Africa depend more on their natural resource base for economic and social needs than any other region in the world.

Two-thirds of the people in sub-Saharan Africa live in rural areas and rely on agriculture and other natural resources for income. The region also has one of the world’s fastest growing populations (approximately 2.2% a year). With this fast population growth, the environmental challenge will increase. According to some estimation, by the year 2025, the population of the African people will be over a billion. If this is the case, environmental challenges will double or triple.

The ecological challenges need geographically focused advocacies, such as pollution in South Africa, shortage of water and drought in northeastern Kenya and water pollution in the mining areas in Zambia and Katanga, DRC, rainforest protection in Central Africa, the huge oil pollution in Nigeria and its growth in Chad, Sudan, and Angola, and the drought in the Sahel region.

The challenges to respond are huge as well and Jesuits and collaborators in the region, especially the youth, need support as they face the social and environmental concerns and accompany the poor whose situations are further worsened by continuing environmental degradation.

One thought on “Ecological responses from Africa: A renewed call for commitment to safeguard creation”