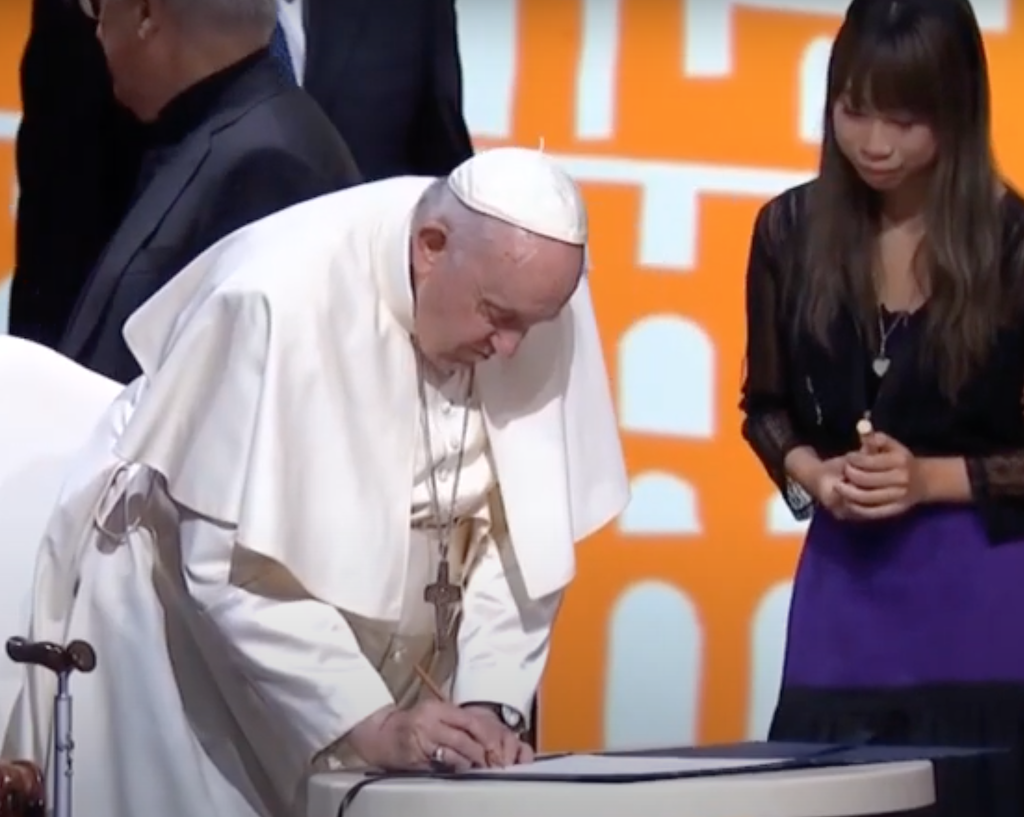 Pope Francis and young people from different parts of the world, represented by a young woman from Thailand who launched a campaign against single-use plastics, Lilly “Ralyn” Satidtanasarn, signed their commitment to a Covenant that lists ways by which a global economy should be changed, “so that the economy of today and tomorrow becomes an economy of the Gospel.” The Covenant is the culmination of the three-day Economy of Francesco Global Event 2022. The full text of the Covenant follows:

We, young economists, entrepreneurs, and changemakers, called here to Assisi from every part of the world, aware of the responsibility that rests on our generation, commit ourselves today, individually and all collectively to spending our lives so that the economy of today and tomorrow becomes an economy of the Gospel, and therefore:

An economy of peace and not of war,

An economy that opposes the proliferation of arms, especially the most destructive,

An economy that cares for creation and does not misuse it,

An economy at the service of the human person, the family and life, respectful of every woman, man, and child, the elderly, and especially those most frail and vulnerable,

An economy where care replaces rejection and indifference,

An economy that leaves no one behind, in order to build a society in which the stones rejected by the dominant mentality become cornerstones,

An economy that recognizes and protects secure and dignified work for everyone,

An economy where finance is a friend and ally of the real economy and of labour and not against them,

An economy that values and safeguards the cultures and traditions of peoples, all living things and the natural resources of the Earth,

An economy that fights poverty in all its forms, reduces inequality and knows how to say with Jesus and Francis, “Blessed are the poor”,

An economy guided by an ethics of the human person and open to transcendence,

An economy that creates wealth for all, that engenders joy and not just riches, because happiness that is not shared is incomplete.

We believe in this economy. It is not a utopia, because we are already building it. And some of us, on particularly bright mornings, have already glimpsed the beginning of the promised land.