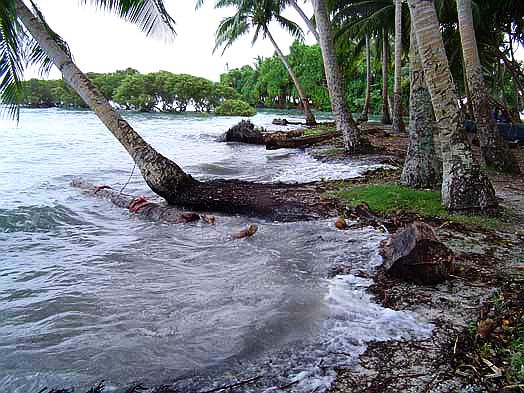 The increasing volume of the world’s ocean has been observed using various measurements that include a global coverage of sea surface heights by satellite altimeters and relative sea level by tide gauges at various locations.  Although the long-term records show an increase in the global average, some places are experiencing falling sea levels and the spatial variation is due to local factors such as the size and shape of landforms, tectonic activity that causes land to move vertically upward or downward and regional climate patterns.  In the previous two articles, sea levels were discussed in relation to both their long-and short-term averages.  Averages only tell us about exactly that, the average level of the water.  What about extremely high water levels?

In engineering, the concept of a 100-year ﬂood is used to represent the likelihood of a particular water level being exceeded during any given year at a particular location.  The level is not reached only once every 100 years.  In fact, ﬂoods with waters higher than this level actually occur once or more times during a 100-year period.  The chance of that happening is about 63.4%.  Furthermore, ﬂoods that cause the level to be exceeded can happen in two consecutive years.

Perhaps it is clearer to say that a 100-year ﬂood indicates the water level that has a 1% chance of being exceeded during any given year.  A ﬂood refers to any unusually high water level that is considered destructive.  For the purposes of this discussion, we limit ﬂood to mean any high water level along the coast that is caused by the tide or a storm surge or a combination of both.

Why use statistics to represent ﬂood levels?  An objective basis to compare water levels across diﬀerent locations is useful for government agencies when they specify requirements for building structures, for example.  When a pier is built, records of past high water levels – not average levels – are used to determine an appropriate height.  Allowance for wave height is also included.  A structure that is made any higher will be too costly.  Secondly, a reference water level by which to compare other ﬂood events at the same location is useful.  Although the 100-year ﬂood is an arbitrary standard, it is convenient because most structures are usually designed to last only a third as long.

A 50-year ﬂood represents the water level that has a 2% chance of being exceeded in any given year at a particular location.  Maximum annual levels from tide gauges can be used to determine this level for Manila and Davao (in the vicinity of the tide gauge).  The blue solid lines in Figures 1 and 2 show the estimate of exceedance probability against water level using actual data.  Dashed lines indicate the 95% conﬁdence intervals.  Manila’s 50-year level is a little over 3.9m; in Davao the level is just under 3.5m.  These estimates are only as good as the data and represent past conditions.  Although they may not reﬂect future scenarios, they are nevertheless the best information available and can be improved by extending the record.

These estimates assume that the average water level remains constant.  If the average water level rises, say by 20cm, then the ﬂood frequency curve has to change.  If the ﬂood statistics do not change, that is to say, the tide and surge magnitudes remain the same, then the curve shifts upward by 20cm.  This simplifying assumption allows a preliminary analysis where involved procedures can provide a more accurate description.

Notice that what used to be the 50-year level (2% exceedance probability) for Manila is now a level that has about a 65% chance of occurring in a year.  Davao’s 50-year level now has a 90% chance of being exceeded in a year.  Considering this, rising sea level has now taken a back seat because increased ﬂooding has a more serious and immediate eﬀect.

Notice though that ﬂood categories only reﬂect water levels.  A 100-year ﬂood level can happen slow or fast and it can occur over a short period or a have longer duration.  The speed of oncoming water will determine its destructive potential and persistent very-high water levels can amplify the impacts of ﬂooding.

Sea levels will continue to rise

So far only the changes in water levels that vary from a half day (affected by tides) or longer than a day (caused by meteorological eﬀects) have been discussed.  Rapidly rising water levels caused by low-pressure systems and strong winds blowing ashore cannot be analyzed from the tide gauge data because they occur at shorter durations than the hourly records.  Such conditions are typical of tropical cyclones.  The magnitude of a storm surge that elevates water levels to the extremes depends on the size and strength of storm causing it and the shape of the land surrounding the coast (topography and bathymetry).  Storm surges are diﬃcult to predict since storm conditions change very quickly and forecasts require data that is accurate to within a few hours of the event.  It should nevertheless be clear that a rise in sea level will increase the impact of storms on the coast.

We began this series of articles by discussing how sea levels vary around the Philippine coast and how they change from year to year.  Satellite images show that the volume of the ocean is increasing in the last few decades.  The current data can only support the conclusion that sea level will continue to rise at least in the next few decades.  Uncertainty in the science stems from the fact that the data records are not long enough and because it is assumed that melting glaciers, ice cap loss, and ocean warming are the only factors contributing to the change.

We discussed how average water levels further vary depending on season and can be aﬀected by larger ocean-atmosphere patterns such as the El Niño phenomenon.

Finally, we showed how water levels can be made more extreme given an increase in the average level.  A long-term rise in mean sea level can cause the permanent loss of land.  This process can take time and can allow a slower, more deliberate response.  Unlike changes in the mean, changes in the extremes have eﬀects that need to be responded to in the short term.

There is no need, however, to sow fear, which may prove to cripple any potential to respond eﬀectively.  A response timeframe needs to match that of the impacts: immediate, seasonal, and long-term.

The challenge is to approach the eﬀects of sea-level rise on particular social and environmental circumstances and to respect the unique concerns of a community by integrating scientiﬁc knowledge and cultural understanding.

The US Geological Survey (USGS) in 1982 produced a manual for the analysis of ﬂooding statistics, Guidelines for Determining Flood Flow Frequency (Bulletin 17B of the Hydrology Subcommittee).

The Philippine Atmospheric, Geophysical and Astronomical Services Administration or (PAGASA) introduces ﬂoods and explains the diﬀerence between a riverine and a coastal ﬂood. See PAGASA and click on Learning Tools.

On the concept of and misconceptions about the 100-year ﬂood, see USGS Fact Sheet 229-96, and the US Federal Emergency Management Agency handout on The 100 Year Flood Myth.

The Science Education Research Center at Carleton College produced a handout in 2008 on Teaching Recurrence Intervals that introduces the concept of measuring and interpreting the statistics of extreme environmental events.

The Philippines Department of Public Works and Highways with support from the Japan International Cooperation Agency produced in 2003 A Manual on Flood Control Planning.

Frequently asked questions about sea level are answered succinctly by the Permanent Service for Mean Sea Level, which is based at the UK National Oceanography Centre.

For more in-depth discussion about sea level, see Tides, surges and mean sea-level (reprinted with corrections) by DT Pugh at University of Southampton.

Changes observed in past extreme sea levels and wave events and the use of these in a model to better predict future events is discussed in the book Understanding Sea-Level Rise and Variability by JA Lowe, et al, and published in 2010.  Close monitoring of relevant parameters is strongly indicated.  See Chapter 11: Past and Future Changes in Extreme Sea Levels and Waves at Wiley Online Library.