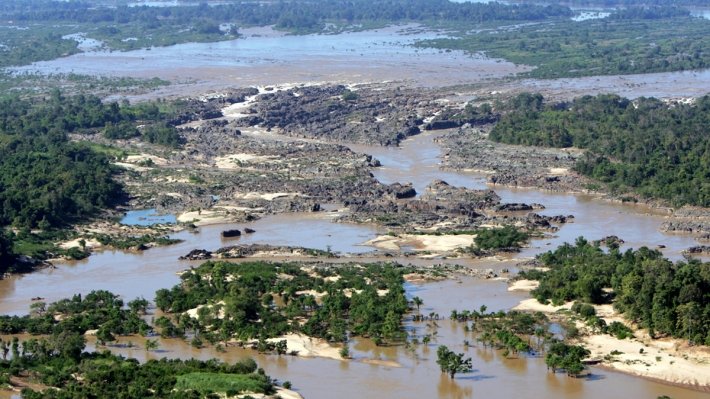 Cambodia is usually known for its ancient stone temples, of which Angkor Wat is the most famous, or for the genocide that happened at the hands of the Khmer Rouge during the period of 1975-1979, which claimed around two million people. Cambodia also used to be the country with the most casualties in the world due to landmines and cluster bombs. But thankfully, the number of known victims due to post-war munitions has steadily decreased over the years, from 1,249 in 1998 to 186 in 2012.

A lesser known fact is that Cambodians are the largest consumers of freshwater fish in the world, estimated at 19 to 71 kg per person per year, depending on the study. However, regardless of the data source, the countries of the Lower Mekong Basin (LMB) – Thailand, Laos, Cambodia, Vietnam – are consistently the highest consumers of fresh water fish as compared to all the other countries in the world.

The reason for this is the Mekong River. Originating from southeastern Tibet, the Mekong River runs an estimated 4,200 km to the Mekong Delta, passing through China, Myanmar, Thailand, Laos, Cambodia, before finally reaching the South China Sea in Vietnam.

A key feature of the Mekong River is the great variation during its annual flood cycle. The river’s water level during the wet season can be as much as 10 m higher than that during the dry season. In Cambodia, this causes the flooding of vast areas of wetlands, opening up fertile habitats for fish while at the same time delivering much needed sediments and nutrition for the growing of rice. This seasonal flooding is a natural phenomenon that has allowed the landscape and the people to survive and flourish. And because the Mekong River runs through a whole diversity of habitats, the entire basin is intimately connected as a united ecosystem in ways scientists are only beginning to understand.

This basin-wide system, driven by the Mekong River, produces 3.9 million tons of fish and other aquatic animals annually (2008) making the LMB inland fishery the largest in the world. Millions of people from around this region partake of this great bounty. For Cambodians, 80% of their animal protein intake comes from freshwater fisheries. In Thailand and Laos, the Mekong River is called Mae Nam Khong, literally meaning “mother water things.” The Mekong River has been regarded by generations as the mother who provides gifts from the water.

There are several factors, however, that presently threaten the river’s productivity and the 60 million people or so who depend on the LMB fisheries for their food and livelihood. Among these are sand mining, overexploitation of fish resources, land conversion of fish habitats, cutting of flood forests, pollution from agricultural runoff, and the effects of a changing climate. But the single most powerful threat which brings immediate and far-reaching effects is the building of hydropower dams on the Mekong River mainstream and on its major tributaries. In particular, the construction of a hydropower dam on the Mekong River mainstream in southern Laos, less than two km north of the border with Cambodia, is disturbing many Cambodians at the moment.

The work of our mixed teams of Jesuits and collaborators in Cambodia, local and foreign, men and women, having religious affiliations or none, has had a long history. Beginning in the refugee camps at the border with Thailand in the early 1990s up to the present, our work has involved campaigning for an end to landmines and cluster munitions, advocating for peace and inclusion, caring for Catholic communities, and engaging in education, health, and rural development programs for the poor, with a special preference for people with disabilities.

We have also begun to get involved with environmental issues in Cambodia, recognizing that when we are not in right relations with God and those around us, human or not, it is the poor who are the first and the worst affected. Issues related to the Mekong River present a great challenge for us, where “many poor communities have been displaced, and indigenous peoples have been the most affected.” (GC 35, Dec 3) Thus, we have started to study the issues involved in the Mekong River, disseminate information to villagers, and help communities locally strengthen the river’s broad ecosystem.

One of our first endeavors was to set up a tree nursery to raise native Cambodian hardwood trees. Run by people with a disability, every wet season we join with church, school, and forest communities to plant our seedlings on their properties. Their care throughout the year, especially during the dry season of the first year or two, is essential to the survival of the trees. Now we are growing flood forest tree species for planting around the Tonle Sap Lake, which will help riparian ecosystems become more robust and allow fish from the Mekong River to have a greater chance of survival. More and more, with continued collaboration with government officials, Buddhist monks, indigenous communities, and people with disabilities, we are learning that planting trees is planting peace among the people in Cambodia.

We also accompany and support local communities in activities of faith as they seek help and justice. For example, in the northeast of Cambodia, at the site of another hydropower dam on the confluence of two of the largest tributaries in the LMB, the Sesan and Srepok rivers, villagers organized a ritual in honor of Neak Ta Krohom Ko (spirit with a red neck). Together with their offerings of incense, a bowl of rice, and a pig’s head, they came with their prayers and concerns for the river that Neak Ta Krohom Ko is believed to protect. During the ceremony, a middle-aged woman with red clothing was believed to have gone into a trance and has allowed the spirit to enter her and speak to the people around. Through her, the villagers spoke aloud their prayers for the good health of the river and the people around it. They felt that the government and the rich were pushing them aside and destroying the land that has been home for generations. Feeling that there was nowhere else to turn to, they sought the only one who has not abandoned them and who has kept the river bountiful through the years.

Another practice that villagers are doing to protect their forests is tree ordinations. Beginning in northern Thailand and spreading out to other Buddhist countries in our region, the ordination of trees involves Buddhist monks and ordinary villagers who chant prayers while old and important trees are wrapped in traditional saffron-colored robes to signify their sacredness and value to the larger community. This deters loggers and proclaims to dam developers that communities care for these trees and hold them dear. We have participated in tree ordinations  with the Sesan River villagers, and plan to collaborate with other pagodas to encourage tree ordinations in other parts of the country.

Finally, we are becoming aware that there is a lack of credible and science-based information about environmental issues in Cambodia. Although the Mekong River is a major resource that affects the lives of millions of people in the four countries of the LMB, there are only a limited number of peer-reviewed studies on topics such as fish life cycles and migration patterns, effects of mainstream and tributary hydropower dams, the importance of wetlands to food security, and the like. We are moving towards research studies on the Mekong River and trying to fill some knowledge gaps which would serve the poor by providing accessible information and to help stakeholders make more informed decisions. As GC 35 says, “This Congregation urges all Jesuits and all partners engaged in the same mission, particularly the universities and research centres, to promote studies and practices focusing on the causes of poverty and the question of the environment’s improvement.” (GC 35, Dec 3)

Our activities are nascent but we are growing in experience and love. There are several institutions that are doing great work for the people here, such as International Rivers, 3S Rivers Protection Network, and The Non-Government Organization Forum on Cambodia, from whom we are learning. Yet, we need more Jesuits and more friends from the region to be involved, “to move beyond doubts and indifference to take responsibility for our home, the earth.” (GC 35, Dec 3) And in our case, this also means engaging with our minds and our hearts the environmental concerns that people face, especially for the millions who call the Mekong mother.

For a related reading, Ecojesuit previously published an article on the management of the lower Mekong in May 2011.