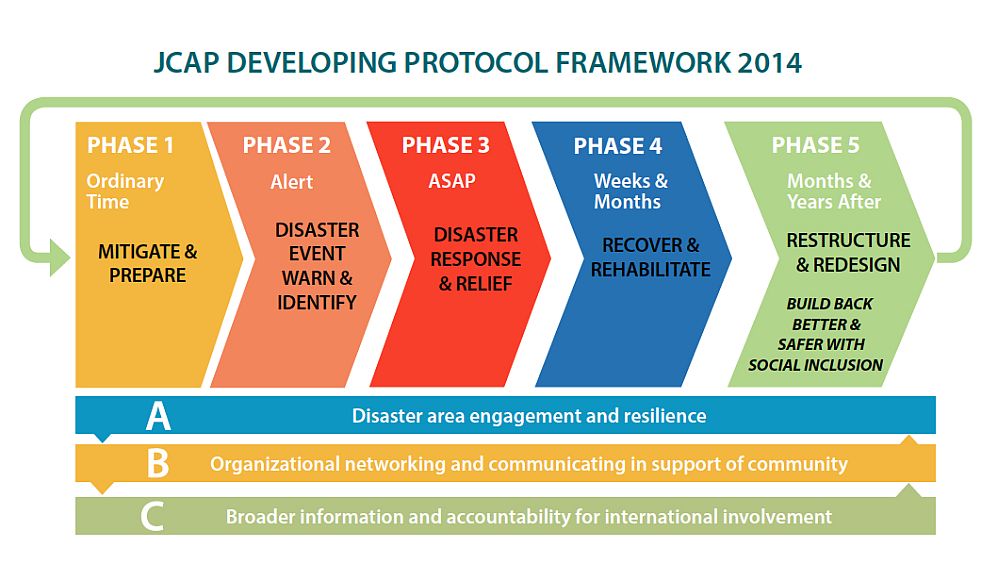 The Jesuit Conference Asia Pacific (JCAP) is developing a coordination protocol that outlines steps for Jesuits within JCAP when responding to disasters that impact the lives of people and communities in this part of the world. Responses to catastrophic events are collaborative in nature, joining local efforts and guiding important international support. This process is ongoing with other organizations and there is much learning from the experiences of Jesuit people on the ground. The effort is also to find ways to collaborate across different phases in disaster risk reduction and management (DRRM) that demand a wider range of coordination beyond disaster relief.

While people in many Jesuit institutions are doing great work in DRRM, having a protocol taps and develops the great potential for magis as more people are reached, networks are broadened, impact multiplied, and response is deepened. A protocol for coordination amongst people provides a system of decision-making and action that outlines procedures and actions to be followed in a particular situation.

The JCAP protocol is a work in progress to guide Jesuit collaborative action and is presently part of a review activity in the Philippine Province. Hopefully, the protocol can be used and improved by other Provinces in their areas of concern given the appropriateness of context and emerging networks. It is presently focused on floods and landslides but easily adapted to facilitate collaboration in the case of earthquakes, tsunamis, fires, volcanic eruptions, and droughts.

While the disaster management cycle is generally described as having four phases (mitigation, preparedness, response, and recovery), there is an increasing realization of a fifth phase or redesign. The JCAP protocol presents a coordination framework with five phases:

Phases 2 to 4 are where many efforts are ongoing, but there is also increasing recognition of the need for more preparedness during “ordinary time” (Phase 1) when it’s not the rainy or typhoon season and is the perfect time to undertake trainings and workshops.

On the other hand, Phase 5 is when restructure and redesign occur and where lessons learnt from the disaster inform future plans. Building back safer and better with a local social economy is a guiding principle, and is the time to review and revise building standards, zoning plans and policies, economic development programs that are socially inclusive, and networking and organizing so that capacities are shared and alliances and agreements are established amongst government, international agencies, professionals, and others from civil society.

The protocol seeks to integrate Jesuit area disaster engagement on the ground while networking with national and international organizations in support of the communities affected. To facilitate donations and support, a clear and simple process is needed for donors to make contributions. And most importantly, a transparent and accountable system for monitoring and reporting funds is needed so that donations are properly documented, official receipts are issued as needed, and donors are kept informed of developments.

This transparent and accountable fund management is also crucial for securing long-term resources for post-disaster rehabilitation, restructure, and redesign. International awareness has to recognize that the long-term problem is tied not only to climate change impact through more extreme weather events but also to livelihoods and secure tenure of homes. These are critical in reducing the social impact of disasters.

Donor expectations and resource mobilization need to be re-assessed so that social and economic inclusion are built in the financial assistance provided, beyond relief and provision of roofs, housing materials, houses, and fishing boats. As previously mentioned in an earlier editorial, key elements that need understanding and action for building social and economic inclusion are access to land, sustaining the local social economy, building capacity in local government, and developing a diversity of options for livelihood and entrepreneurship.

God is Creator of the universe and all life, and in disaster risk reduction we are challenged to experience through our faith how to embrace “natural” disasters. We are learning humbly that we are embracing not an “act of God” but human vulnerability and mortality as part of an ongoing Creation. At the same time, it is beginning to dawn on us that we are partly a trigger of our own suffering through climate change. In our faith, we slowly come to understand that the crucified Christ silently accompanies those who suffer. We need to be able to communicate this while expressing deep hope for humanity, knowing God’s fidelity to us. This is why today we seek a much deeper response of compassion and reconciliation on Earth.

For more details, the JCAP coordination protocol for disaster risk reduction and management can be viewed and downloaded here.