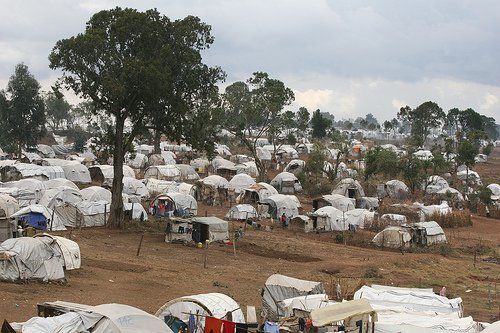 The phenomenon is well known since long, but concrete numbers are rare: more and more people are forced to relocate permanently from their homes, due to environmental degradation and ecosystem losses.

Projections for 2050, released by the International Organization of Migration in 2008, range from 25 million to one billion people displaced by the consequences only of climate change. Their livelihoods are threatened in many ways: farmers lose arable land due to droughts and other extreme weather events whereas islands and coastal areas are affected by devastating storm tides. As a result, people migrate from environments which no longer guarantee food stability and which no longer are hospitable for human civilization.

Numerous experts and policymakers therefore demand a new definition of the term “refugee” and a legal basis for “environmentally displaced persons.” Several attempts werre made within the last 30 years, but a workable solution is not yet found.

To apply the refugee status on environmental displacees would not only require an exclusive causal link between a specific change in an environment and the person’s decision to migrate, it would also affect the specific guarantees warranted to refugees according to the Geneva Refugee Convention of 1951.

The authors discovered several legal regimes that could serve as a first step for further refinement: the UN Convention to Combat Desertification (UNCCD) that acknowledges explicitly the link between environmental factors and migration. Furthermore, the precautionary principle, explicitly endorsed in the UN Framework Convention on Climate Change (UNFCCC), could be interpreted to apply to environmentally induced migration.

A rather innovative approach to address the apparent gap in international law could be the “Responsibility to Protect.” This principle, originally evolved against a background of genocide, tries to make it incumbent on states to take protective measures in events where human rights are imperilled. The study also informs about national precedents, such as Australia’s Migration Amendment Bill of 2007 that contains a definition of “climate refugees” and empowers the government to allocate visas to people displaced subject to the declaration of a “climate change-induced environmental disaster.”

The authors stress the necessity to prepare commensurate policies and legal regimes to adequately cope with the upcoming migration flows. Neither precise numbers of “climate refugees,” the study argues, nor precise predictions of eventual climate impacts should be of immediate concern. Although robust figures on environmentally induced migration, desertification etc. are hardly available, politicians and legal experts should deal with the subsequent challenges in a constructive and humanitarian way, notwithstanding “whether there will be 25, 50 or 100 million uprooted people looking for new whereabouts.”