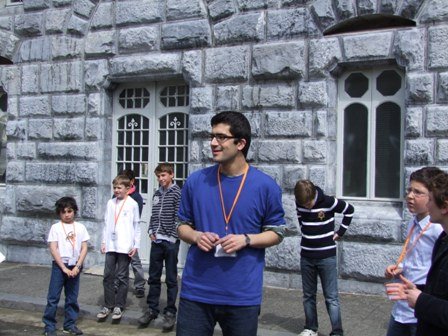 Jesuits Sébastien Carcelle and Stefan Hengst share their responses to our questions about the ecological awareness and practices in their respective campuses.

Sébastien is an agricultural engineer graduate and worked for the French National Institute of Agronomy (INRA) before joining the Society of Jesus in 2006. He is currently pursuing his theology studies at Centre Sèvres, Paris. Stefan worked for the Jesuit Refugee Service (JRS) in Uganda and is now studying theology at Hekima College Nairobi in Kenya.

Ecojes: To what degree are students and staff at Centre Sèvres knowledgeable about environment conflicts?

Sébastien: Most of the students, professors and administrators, roughly 70% of the campus community, are aware of environmental questions, but it is still a minority who are actively engaged in these fields. Many could help but do not know how to turn their willingness into action.

Ecojes: Is your institution engaged in raising awareness of environmental issues and in conducting concrete activities to lower the environmental footprint of your campus?

Sébastien: In the faculty’s daily life the only practical measure is a certain degree of attention to recycling plastic cups when they use the coffee machines. There are some construction and renovation activities, but in view of financial restrictions, environmental components, such as thermal insulation, are not always taken into account. Sometimes these topics are raised in classes (theology, ethics, exegesis and philosophy), and there are even sessions and workshops on ecology, well attended by students of very different social backgrounds. Many students are engaged, such as those within the “Justice and Peace” movements, thus environment questions are recognised to be one part of their mission.

Ecojes: Do you see any impediments to environmental activities on your campus?

Sébastien: In my experience, the alarmist rhetoric on environment, often launched by media and scientists, has a negative impact on many students. Another major hindrance to further activities on the campus is the financial situation.

Ecojes: How might Jesuits be most effective at promoting concrete actions among the 200 Jesuit schools of Higher Education around the world?

Sébastien: One promising attempt might be to develop a reading course on the identity and the history of our Institute, our communities and missions from an ecological point of view. This is a proposal I received from a fellow student, an Ursuline sister. In order to motivate her older sisters to a more environmentally friendly behaviour, she offered regular readings on the history of different communities and, more broadly, of the Institute itself. By this initiative, the sisters got a survey about environment-related initiatives from past decades and centuries. They discovered that the concern for nature is not even new, although it was not formulated explicitly in the older texts. For the Society of Jesus, such a reading course could be offered, perhaps those with focus on the Jesuit missions in Paraguay, today’s NGOs in Peru and Colombia, the agricultural schools in Africa, and other efforts, and with a focus on the lifestyles of our communities.

Ecojes: What’s your estimate of the level of awareness of environmental issues at Hekima College?

Stefan: The administration of the college is highly alert about energy saving, but the reason is mainly to save on electricity costs rather than because of environmental aspects. In the Jesuit community, we use low-energy bulbs, and all entities on the campus have a “light marshal” to turn off the lights in the late evening. Since our back-up does not work permanently and the public services break down very often, we lack electricity several hours per day. Therefore, every community on the campus is asked to be creative in saving energy. The use of Thermos flasks for example is highly recommended in order to avoid unnecessary boiling of water. Whereas several Jesuits have a rather developed green awareness, others only have a financial awareness, and others have neither one nor the other.

Ecojes: To what degree is the Hekima College engaged in raising awareness of these issues?

Stefan: The environment related activities are mostly an internal Jesuit concern. The external students only become aware of energy questions given that a stable supply is not guaranteed. Recently the college launched a broad campaign to reduce energy consumption. Indeed, we succeeded in reducing by up to 30%, but this was mostly due to the fact that we cook on gas and not on electricity, and only electricity is presently counted as an ‘energy cost’!

Ecojes: On your campus, what are the major impediments that restrict engagement in ecology-related activities?

Stefan: We burn our rubbish as it is common in Africa, and a farmer uses only our food leftovers to feed his pigs. Students are not aware about the fact that rubbish should end up in the dustbins. Small items normally are just thrown away. When we started to collect vegetable and non-meat organic material for creating compost, the staff were upset because they had been accustomed simply to burn everything. Another impediment consists in the generally ignorant attitude towards freshwater. Since we receive our water through its own bore hole, everybody regards its delivery as a matter of course. It is free of charge, so let’s use it as we wish.

Ecojes: How do you think Jesuits might be most effective at heightening awareness among their schools?

Stefan: Our College needs further teaching, not only as far as cooking habits are concerned. We should discuss frankly where we can save energy without losing quality of life. And we have to change our attitude towards nature. Some people say, if an African sees a tree, he just sees charcoal.