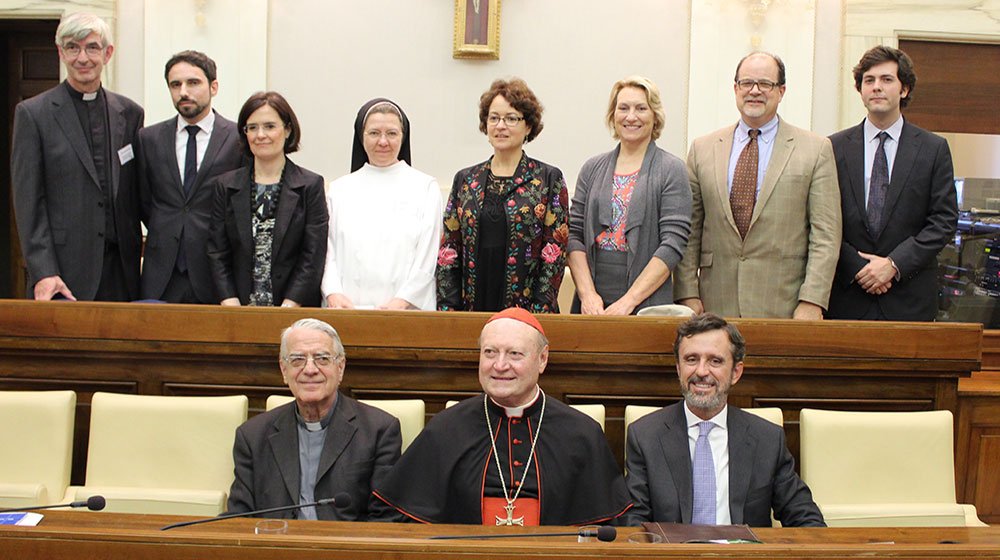 Theology Professor Michael Schuck and Dean Nancy Tuchman of the Institute of Environmental Sustainability-Loyola University Chicago, who co-edit Healing Earth and have spent five years developing the project, received the award in the Vatican with four other recipients and had an opportunity to meet Pope Francis up close at Saint Peter’s Square, acquiring a special spot within a few feet as he delivered his weekly message.

For them, Pope Francis’s encyclical Laudato Si’ came at a crucial time in the development of Healing Earth, and where he spoke incisively about our world’s environmental crisis, calling us all to become people of compassionate care for the planet.

“He spoke of esperanza, hope.  This Pope is my hero,” says Tuchman.  “He’s not only a solid-gold ethical world leader, but he is spot-on about our need to care for our environment.  Laudato Si’ was very important for Healing Earth.  It’s a good connection and inspiration to this project.”

The Expanded Reason Award, given through a partnership between the Fundación Vaticana-Joseph Ratzinger/Benedicto XVI and the Universidad Francisco de Vitoria in Spain, came with the opportunity to meet the Pope, participate in a two-day awards conference, and receive a Euro 25,000 honorarium.  The award embodies the integral ecology and interdisciplinary approach that Pope Francis discusses in his encyclical and that Pope Benedict XVI champions through this award.

For the award presenters, ‘Expanded Reason’ is an effort to integrate multiple ways of reasoning on a single topic, such as bringing together science and theology in a discussion about environmental sustainability, or economics and Roman Catholic social thought in an understanding of just entrepreneurship.  This effort stands in contrast to the tendency in contemporary scholarship to remain isolated within one’s own area of specialization.

During his time as Cardinal and then Pontiff, Pope Benedict XVI worked to encourage scholars to expand their imaginations and their conversation partners.  “Pope Benedict XVI was convinced that what we define as reason in the Western world is too narrow,” says Schuck.  “He encouraged the creation of a Vatican Foundation to bring the humanities and sciences into conversation, to more effectively address the complex problems of today’s world.”

“We know how necessary it is to educate students as whole persons–as intellectually inquisitive, morally developing, and spiritually graced human beings.  That is the trademark of a Jesuit education.  But we also know that there are few teaching resources that can guide exploration of the scientific, ethical, and spiritual dimensions of today’s environmental challenges in one textbook,” says Schuck.

Since 2012, over 100 scholars have contributed insight or written portions of the text in Healing Earth.  These scholars come from a variety of disciplines including ecology, theology, biology, physics, chemistry and philosophy.  To date, the book is used by over 85 teachers in a variety of classrooms in 19 countries and includes a Spanish translation.

What’s next for Healing Earth?  Both Tuchman and Schuck agree that the book needs to be translated into French and Polish, and much of the prize money will be spent on improving the technology platform.  Which is why when it came time for the papal blessing of the objects, Tuchman held up her cell phone.  “I pulled up Healing Earth on my phone in hopes that the Pope’s blessing might grace the future of the Healing Earth project.”

This article was originally published in the Institute of Environmental Sustainability-Loyola University Chicago website.