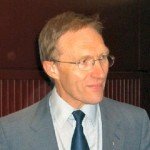 Frank Turner participated in the conference in the European Parliament (September 14, 2010) about the Encyclical “Caritas in Veritate” (Charity in truth) jointly organized by the European Popular Group and the Commission of the Bishops’ Conferences of the European Union (COMECE).

Taking up a point that has been raised indirectly today, but not discussed directly, I want to add a preliminary note about ‘Catholic Social Teaching’ (henceforth ‘CST’) as a genre: about documents such as Caritas in Veritate, and how we best read them. Such documents have a key role in the Church – and have some inherent limitations, just as to choose any mode of writing is to accept certain opportunities and certain limitations. In particular, an encyclical is neither a work of political analysis, nor a work of theology as such: it is precisely teaching.

Having said that, I turn to my specific topic, ‘Faith and Environment’ which I’ll consider under three headings. All three aspects are covered in Caritas in Veritate, though not with equal weight. That is natural since this encyclical is not devoted to the Environment as such, but, as the title indicates, to articulating what is authentic love. (Pope Benedict’s message for the World Day of Peace, 1st January 2010: ‘If you want to cultivate peace, protect creation’, develops the encyclical more systematically, and I’ll refer to this Message also.)

The three main environmental themes touched on in Caritas in Veritate seem to me to be these. In each case I quote the encyclical, and offer a comment.

I. To the eyes of faith the Creation discloses God, the Creator. Part of the human response to Creation is ‘contemplative’: we are to appreciate it. If we do not do that, any ethical duties imposed on us to protect it will seem secondary, or even oppressive.

This sense, of course, far precedes the Christian era: Psalm 104, a sustained hymn to the glories of Creation, leads to praise of the Creator (v.33, ‘I will sing to the Lord as long as I live . . .’

In Caritas in Veritate (§.48): ‘In nature, the believer recognizes the wonderful result of God’s creative activity, which we may use responsibly to satisfy our legitimate needs, material or otherwise, while respecting the intrinsic balance of creation. If this vision is lost, we end up either considering nature an untouchable taboo or, on the contrary, abusing it. Nature is . . . a gift of the Creator who has given it an inbuilt order’.

Comment: We are to appreciate it as an authentic, inherent, good. But to regard it as absolute would be to deny that is discloses any good (any ‘god’ beyond itself.) The Pope’s argument is directed in two contrary directions. On the one hand, the contemplative attitude to nature must not slide into ‘nature worship’: against the so-called ‘deep ecologists’ (the 2010 Message speaks of ‘ecocentrism’). These see humanity as no more than one species among others, part of the natural order but in no way transcending it: so, in the view of deep ecologists, human beings could even be dispensable, if they became a threat to the rest of creation: which therefore becomes untouchable, a ‘taboo’. But equally, Creation has its ‘inbuilt order’: that is, it has an intrinsic good which is not reducible to human advantage. Care for nature is more than ‘enlightened self-interest’. We may (we must) use it responsibly to fulfill our legitimate needs’, but to damage it so as to indulge our excesses is to abuse it. (This morning we noted the possibility that the idea of ‘growth’ is narrowed to ‘accumulation’.)

II. The cosmos, and specifically this earth, is the indispensable context of our human life.
In Caritas in Veritate (§.50): ‘Human beings legitimately exercise a responsible stewardship over nature, to protect it, to enjoy its fruits and to cultivate it in new ways . . . so that it can worthily accommodate and feed the world’s population. . . We [have a] grave duty to hand the earth on to future generations in such a condition that they too can worthily inhabit it’. From a Judaeo-Christian perspective, there is a ‘covenant between human beings and the environment, which should mirror the creative love of God’. In other words, we assume an obligation that follows from faith to sustain the creation and even enhance it – through our intelligence, our technologies, etc.

Comment: The fact that we inhabit the earth is not incidental to our lives, but is of their essence. We cannot attain our human good apart from the good of creation, so the relationship between humankind and the rest of creation is reciprocal. We are ‘tenants’ of the earth, but we are not its owners. The Pope quotes Genesis 2, we are to ‘till it and keep it’. In the 2010 Message, Pope Benedict interprets Genesis as giving to humans not simply authority, still less ‘absolute dominion’, but responsibility. He quotes Pope John Paul II’s Centesimus Annus (1991): through sin nature is less ‘governed’ by human beings than ‘tyrannised’ by them.

In the case of climate change, however, one of the greatest threats of our age, it is clear that human practices contribute to global warming – though it is disputed to precisely what extent. But it cannot be disputed that the threat is a challenge to humankind.

III. ‘The goods of creation belong to humanity as a whole’ (a quotation from 2010 Message, §.7). Environmental damage is also a social evil: in particular it harms the poor who have the least chance of evading its consequences, whereas the products of environmental exploitation go overwhelmingly to richer countries and richer people. The early sections of Caritas in Veritate (§6-7) – reflecting CST as a whole – insist that justice and the service of the Common Good lie at the heart of what it is to love: and this perspective informs the environmental sections also. In fact the sections on the environment are introduced through the lens of development, and the Pope applies this principle, the universal destination of the goods of creation, to the principal dimensions of human life: commerce, the international political order, and each person’s choices, often expressed through civil society.

Commerce (§.49): ‘The fact that some States, power groups and companies hoard non-renewable energy resources represents a grave obstacle to development in poor countries’. ‘There is a pressing moral need for renewed solidarity . . . The technologically advanced societies can and must lower their domestic energy consumption’ – so that others do not needlessly suffer.

The international political order (§ .67): the Pope does not, as some have supposed, propose a ‘world government’ – but he commends ‘a true world political authority’ for certain issues that are not governed effectively through our present institutions. Among these issues is the protection of the environment’. He stresses especially the urgent need for peace, not least (in this specific context) bearing in mind the immense environmental degradation caused by military activity.

Personal responsibility (§. 51): It is easy for us to project all blame and all responsibility onto politicians, corporations, etc. But the Pope equally appeals to ideals of sobriety and simplicity, ideals that can be inspired by the spiritual force of a faith-vision, but can hardly be a plausible or popular politicians’ cause unless the concern is widely shared in the culture. He ‘invites contemporary society to a serious review of its life-style, which, in many parts of the world, is prone to hedonism and consumerism, regardless of their harmful consequences.’ Instead of indiscriminate ‘growth’, we are to look to ‘solidarity and civic friendship’.

Ladies and gentleman, I don’t think the Pope is appealing here to the people of Somalia or Bangladesh, or even to the poor of Brussels and London. He has in mind people like us.

One thought on “Faith and the Environment: European Parliament Conference on Caritas in Veritate”