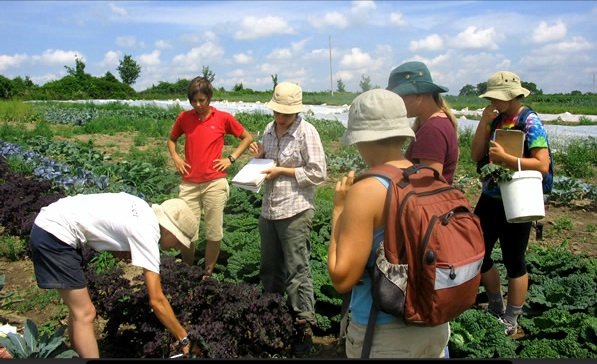 The Ignatius Jesuit Centre in Guelph, Ontario, Canada, is a place of beauty and sustenance, a place to pray and play, a place where nature nurtures mind, body and soul.  It is home to several interdependent facilities and projects that collectively uphold the Jesuit mission.  Since 1964, Loyola House has welcomed more than 60,000 people of all faiths to deepen their relationship with God through retreats and training in Ignatian spirituality.  Surrounded by a working organic farm, woodlands and wetlands, it offers countless opportunities to “find God in all things.”

The Ecology Project, whose mandate is to further awareness and understanding of ecological issues from a Christian perspective, supports the Centre’s goal of integrating ecology into all its retreat and training programmes.

Ignatius Farm is a 240-hectare certified organic farm, which the Jesuits have been farming since 1913.  A portion of the farm is in food production while the remainder consists of woodlands, wetlands, winding creeks, and an extensive network of trails.  Our Apostolic Plan is guided by the words of John English, SJ who said that we should cease to consider the farm as part of our financial portfolio, but rather, consider it to be part of our “spiritual portfolio.”  From out of the spiritual connection to the land have flowed activities that bring together faith, justice, and spirituality.

In the last decade, the Centre launched a program that enables individuals to rent community garden plots making it possible for people to grow their own organic food, form a community, and nurture a spiritual relationship with food.  We also lease farmland and mentor beginning organic farmers.  With more and more of Canada’s family-run farms swallowed up by massive agribusinesses, this is truly a counter-cultural movement, proving that it is possible to break out of the industrial agricultural model of intensive volume production and extremely poor living conditions for animals.

A related programme is the Farm Internship.  Every year, up to a dozen young people live and work on the farm during the entire growing season to learn how to become organic farmers.  The interns also help prepare and market the 75 different kinds of vegetables produced by the farm to local families through the Community Shared Agriculture (CSA) programme.  Great emphasis is placed on building connections between the people who grow the food and the people who eat the food.  Every member of the CSA has an actual relationship with the CSA farmers and farm interns.  They see them working in the fields, they watch them prepare the vegetables for the farm store, and they work alongside them in the pick-your-own-produce section of the farm.  The future of sustainable farming lies in the development and cultivation of such relationships.

For a century, our land has nurtured people from all walks of life.  In 1996, however, this longstanding tradition came under threat when Wal-Mart expressed a desire to build a new store right next to our property.  We were deeply moved and spiritually enriched as friends from the surrounding area spoke out on our behalf during the decade-long struggle to prevent this development, about how important it was to have a refuge close to the city where spirituality was nourished, good food was grown, community was developed, and inter-faith dialogue was encouraged.  We were determined to keep spreading and sharing these values.  Thus, even as the new Wal-Mart greeted its first customers on 1st November 2006, the Ignatius Jesuit Centre announced it was setting aside 100 acres to be protected in perpetuity.  Research shows a reserve of this size is the minimum needed to provide a sustainable habitat for birds living in the forest interior and to protect them from the impacts of climate change at the forest edge.  People can adopt one square metre of the forest with a C$20 donation, which the Jesuits of English Canada pledged to match.

We call the Ignatius Jesuit Centre sacred ground.  Here, thousands of people have encountered their Creator, experienced transforming moments of clarity and insight, and been profoundly refreshed by an unpredicted joy.  Ignatius helps nurture relationships between people, animals, food and the land that provides staff and visitors alike that rare experience of aliveness and oneness.  Here, people develop skills for living as they were meant to live – not only on the surface, but deeply, in all of life.

Ms Marianne Karsh, born in Ottawa, Canada, is a forest research scientist and is the Ecology Education Coordinator at the Ignatius Jesuit Centre of Guelph.  She is also the founder and executive director of Arborvitae and a scientist with Environment Canada specializing in biodiversity and climate change. You may contact Ms Karsh through her email: ecologyeducation(at)ignatiusguelph.ca.