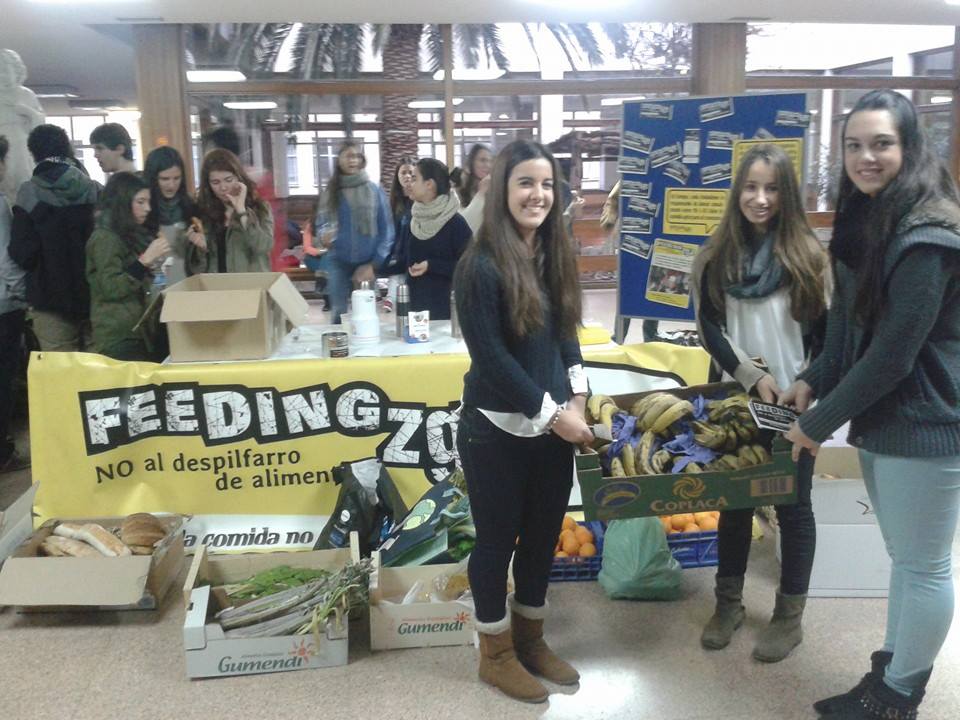 On 19 December, 75 juniors and seniors from Colegio Jesuita El Salvador in Zaragoza, Spain, gathered in the morning, put on aprons and – wielding knives, and peelers – started to cook for more than 150 guests, mostly students and teachers previously invited over for lunch.

But lunch did not really begin that rainy morning. A few days earlier, a smaller group of students gathered in the local organic market of the city to ask for “free food,” the type of food growers can’t sell and usually throw away but is still good for human consumption.

Throughout the week , from Monday through Wednesday, different groups organized waste routes and went to various local city bakeries, grocery stores, and supermarkets who, once again, donated plenty of food to the students once they explained what they intended to do with all that stuff about to be thrown away: use it.

Bread, pastries, tomatoes, squash, potatoes, leeks, and fruits of various kinds were the wonderful result of the effort. Though fit for consumption, all that food would have never made it to the 150 bellies that were filled with the food, had it not been for the concerned students.

Thousands of tons of fresh fruit and vegetables are wasted in European farms every year. The US and Europe have nearly twice as much food as required by the nutritional needs of their populations. Up to half of the entire food supply is wasted between the farm and the fork. Many of the things we grow in the world never make it to the stores. Why? Because it does not meet the requirements, such as if the fruit is too small or aesthetically not attractive.

A third of the world’s entire food supply could be saved by reducing food waste that is enough to feed three billion people. This would still leave enough surplus for countries to provide their populations with 130 percent of their nutritional requirements. Shouldn’t we do something to stop this crazy dynamic?

The global food waste scandal is due in large part to the stores and the consumers who demand food in “perfect condition.” In Aragón, Spain where the Colegio Jesuita El Salvador Jesuit is located, 200,000 tons of food are thrown away every year.

The global food waste scandal has drawn the attention of the UN Environmental Programme, and with other partners, launched in 2013 the Think.Eat.Save campaign of the Save the Food Initiative. According to the campaign, the down side is that food waste is a massive global problem that has negative humanitarian, environmental, and financial implications and the up side is that with relative ease and a few simple changes to our habits, we can significantly shift this paradigm.

Part of the “up side” is Tristram Stuart, author of Waste: Uncovering the Global Food Scandal and founder of Feeding the 5000 initiative, a collective effort trying to raise awareness and reverse the culture of waste so deeply ingrained in many of our societies. This initiative has spread to several European cities, and arrived in our local school with the support of Feeding ZGZ volunteers, the Colegio Jesuita El Salvador Social Apostolate initiative, and the generous assistance of many teachers.

Monica and Pilar, two of the students involved in the campaign, sum up their experience: “For us and for the others who were there, it was a great experience. Most vendors gave us some food that they would not sell, but there were some who even gave us food that they could have sold, just because they wanted to collaborate. It was a very good and entertaining experience. We also felt that we helped each other and learned that some things we thought were essential to our lives may not be all that important after all. So we gradually entered the dynamic of a world demanding change, and realized it is in our hands to bring change. And who better than us to undertake this challenge?”

A related article was published in Ecojesuit  last August 2013.