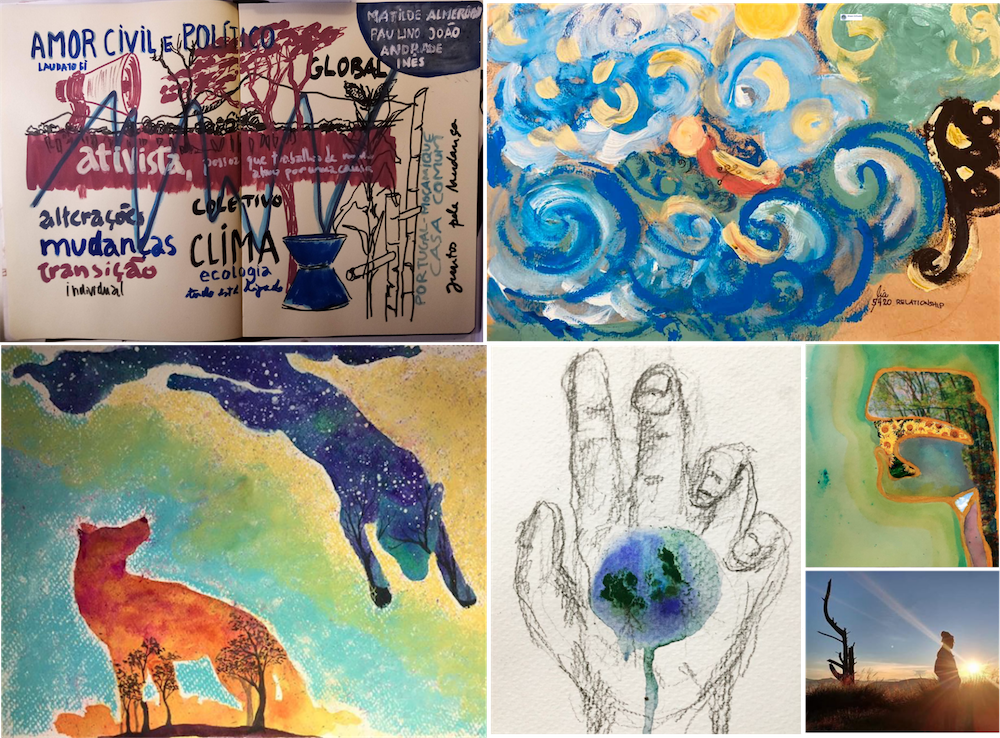 As countries grapple with the social and economic impact of the pandemic, we see across humanity a compassion with growing insights and recognition of what led the world to this crisis. Many get lost in the arguments of moving forward; confusion comes before commitment to a shared collaboration for radical change.

Much compassion is expressed knowing that billions have no medical services and live in appalling conditions that breed the virus. How can they be locked down if they are of no permanent address or have tiny spaces without access to sufficient water and food? The mental anguish is wide and deep, given the suffering of many.

COVID also attacks the human conscience, forcing us to face reality and daily challenges how we think of others and care for all.

Yet this recognition of reality and outpouring of compassion from the local, regional and national can be forgotten when the lockdowns are lifted, if there are no lead actions and good leaders to facilitate and systematize the change.

This COVID-19 crisis requires reckoning with several crises as one wrong decision can bring back the problem and dig into a deeper chronic disaster a major sector or geographic area.

In drawing the map for crisis response beyond the immediate medical challenges that are many, four areas are distinguished that are usually separated out and pinned down in different corners. In reality, what we push into a corner marginalizes that problem in the mind but does not reduce its compounding impact in an integral world.

Just one example is the water crisis in many Asian cities that prevents the basic health requirement of washing hands. With many congested urban areas of informal settlers, the environment can provide a simple answer to the problem, but the city has not built simple labor quarters with basic water facilities that can be used by poor communities.

The world is not flat, and these margins must be drawn together in our heart to form a whole. The earth as a globe that continues in its cycle of life is not a collection of independent lifestyles or ecosystems.

Vulnerability is literally spread across the land. In dense urban populations, there can be no effective lockdown, social distancing, food, sanitation, and the months of uncertainty are unbearable. In the broader rural expanse, the land fails the people because of degradation of soils, low water infiltration, desertification, loss of ownership, mining, damming, pollution, manipulative farm gate pricing, and unfavorable conditions driven by climate change and yes, destruction of biodiversity that brought us in contact with the virus.

The conflicts these raise resulting in isolated management decisions continue to drive millions of vulnerable migrants to find shifting servile and exploitative work at best.

COVID-19 brought into focus the vulnerable, and the following figures from international organizations reflect our terrible times: 272 million international migrants, 26 million refugees, 41 million internally displaced persons, 4 million stateless persons, 150 million homeless, 1.6 billion with no adequate housing, 200 million unemployed. Not all of these people are included in the 821 million with chronic hunger, who may have a menial meal a day.

The food, distribution, and pricing regimes are still lacking. There are many places in the world where we grow more food for livestock (1.9 billion) than for the needs of local people. This can no longer be pushed into a corner of the mental map.

While national and global institutions struggle with these realities anew, day after day there are also thousands of communities – through the simple experience of thoughtfulness from neighbors, vendors, community centers, farmers – where people experience comfort and share. It is human to weep, a moment of relief and solidarity; God too weeps with joy.

The compromised and increasingly degraded environment
The excessive stress on the environment is inseparable from the crisis that has interwoven fundamental causes of this pandemic.

Nearly 70% of natural land cover has changed and is downgraded in terms of its ecological services of keeping air, temperature, water, soil and biodiversity in balance. The 30% is seen as a corner of the world we view as pristine and where we also think we have done a good job at conservation. But in reality, we botched the job at integration and finding the balance.

The world is increasingly an environment, our nest if you like, that we are re-creating in our own dirty, wasteful image. We are traveling through the earth’s resources at a staggering pace without the counterforce of gravity (that is renewability) to hold us in place. We are spinning out of control without knowing that we are going to hit ground zero with eight billion people on board.

The cities, land, water, and also the markets (and wasteful consumerism), fail billions of people daily. The myth of growth without equity is exposed.

Cities should be a living environment, a manmade environment that is mutually caring. Yet cities have become places of extreme exploitation where we treat humans worse than the animal we eat.

For a moment during this crisis, the human consciousness is awake, and no economic logic can cloud the revealed contradictions in the broken relationships between the environment and the people.

In response to every crisis event the environment plays a role; it can be supportive and provide flexibility. But because of the sustained exploitations and lack of accounting for ecological costs, we have reached several boundaries without possible options.

We simply argue “to cut more forests to feed more people” but refuse to acknowledge that it is a false argument. We also decide to dam more rivers to have more water, but today this results in the loss of access by others. We don’t look at cutting wastewater and we use technology to extend the problem and pressure on nature. We hardly registered the disastrous typhoons, locust swarms, fires, spills and the chronic state of the Amazon.

Pope Francis cries out against the hypocrisy of the many who destroy creation:

“This crisis is affecting us all, rich and poor alike, and putting a spotlight on hypocrisy. I am worried by the hypocrisy of certain political personalities who speak of facing up to the crisis, of the problem of hunger in the world, but who in the meantime manufacture weapons. This is a time to be converted from this kind of functional hypocrisy. It’s a time for integrity. Either we are coherent with our beliefs or we lose everything.” (From An Interview with Pope Francis, ‘A Time of Great Uncertainty’, 8 April 2020)

Yet we also enjoy the snowmelt, spring flowers, bird songs, roaming animals, fruit seasons and harvests as we move through the earth zones from north to south. When another species goes extinct, we cry with the Creator as part of God’s glory is lost. We know what tiny seeds of hope we are and as we teach children to experience the gifts of life, then all the more we must reach out and care. We see the regenerative power of the earth healing; land and sea, fruits and birds.

All that is good can flourish with humanity if we seek to act together, if we trust and seek the common good. As after the Flood, will we too say after COVID-19: we will never let this happen again?

A changing global finance paradigm
In simple terms, business and politics in many areas globally weigh the cost of jobs against the cost of life in order to generate immediate policy supporting the economic generators to move. The business-as-usual proponents and dominant operations that gather a great percentage of the returns for an elite is based on a calculated and traditional fiscal paradigm that keeps much of the world grounded.

There are, however, bigger wheels that grind slowly yet urgently for change coming from the global financial centers. The paradigm is significantly opening to change since the global financial crisis of 2007-08 that penalized erring economies, recognizing the vulnerability of billions and the danger of mounting carbon. Surprisingly, names like Angela Merkel (Chancellor of Germany since 2005), economist and banker Mark Carney (Governor of the Bank of England from 2013-2020), António Guterres (9th UN Secretary General and took office in January 2017), and economist Kristalina Georgieva from Bulgaria (Chairwoman and Managing Director of the International Monetary Fund since 2019) are emerging as people who will make a difference.

They are seeking correctives by fueling jobs in the directions of gaining sustainable energy and food sufficiency, while reducing inequalities and carbon emissions. Where the principles of sustainability might not be enough to attract smaller and poorer nations, the financial design might make for a carbon-friendly engagement.

From the local and national, we have to seek to support and reach for these opportunities to drive our responses towards what heals relations rather than what builds elites. The economy can be focused on sustaining the social and environmental relations and not pitting them as opposites.

The precariat bubble
An emerging underclass involves people getting out of poverty and slightly lifting themselves into the upper edge of vulnerability. Birthed by a global market economy, they are the self-employed and the zero-hour contract workers moving in and out of various jobs that give no meaning to their lives, facing insecurity, with no stability in wages, benefits, and rights.

They might make it within their lifetime, but for the moment there are millions of business processing outsourcing (BPO) workers including information technology (IT) and call centers, those in ride hailing and food delivery services, and in e-commerce where people grab (pun intended) the opportunity to get a chance to be more.

This is a new social environment that is experiencing possibility with vulnerability, independence and participation with high risks and no benefits.

Described as the “precariat” in 2011 combining precarious and proletariat, people in this class are longing but are not belonging. They are discontent with the way things are and form an uncalculated populist vote. Growing since the Arab Spring, they have nothing to lose. To overstate the dynamic, they fight the mediocrity and status quo, like a virtual techno-war. This is a most critical percent of uncertainty in the world, a corner mostly in flux. Vulnerability exposes this “lucrative” bubble; lucrative because these people can be used by whoever promises most change.

So what are the pathways?
There are local actions on the ground giving great hope and help, needing to be strengthened and connectivity with the revised perspective a humanity facing grave inequality and poverty. For the politically vulnerable population who are swayed by the need to survive, how do we make decisions together for their stability?

There are lead financial programs coming from above but they must be socially reinforced from below. When do we globally accept the cost of living sustainably on this earth? Can we seriously commit to radical change and find the paths forward that keep the focus for a generation?