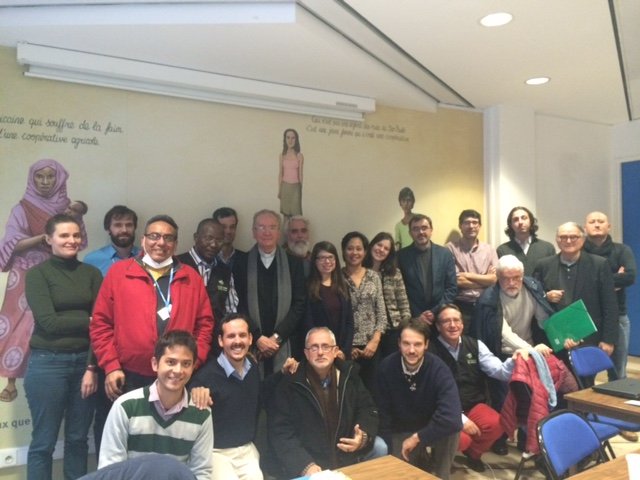 The tension held during the first week of the 21st meeting of the Conference of Parties (COP21) in Le Bourget, Paris, France is clearly a sign of the times and a time when we define the future. The decisions may not be in ink but the momentum to achieve commitment is building up rapidly. It is unlikely that 150 leaders will attend COP22 in November 2016. That meeting may help the economy of Marrakech, Morocco but critical difference has to be made here and now so that we go home doing the right things.

The Ecojesuit team met this week with several people both locally engaged in the French commitment and others who came to move the COP21 commitment. The French commitment is very recent and though now seeking new initiatives, it is greatly challenged if it is to play a lead role.

In Paris, we met with physicist Professor Hervé Le Treut, a senior researcher at the Centre national de la recherche scientifique or CNRS (National Center for Scientific Research) and professor at the École Polytechnique. He also serves as director of the Laboratoire de Météorologie Dynamique (Laboratory of Dynamical Meteorology) and member of the Joint Scientific Committee of the World Climate Research Programme and the French Academy of Sciences. The challenges, he says, “are so great that we need to move quickly if we really want to offer effective solutions before it is too late.” He also shared that “we really need innovation in energy generation” which is a bottleneck in all our systems, and pair this with ambitious financing objectives.

Mr Jean-Charles Hourcade is Director of Research at CNRS and formerly headed the Centre International de Recherche sur l’Environnement et le Développement (CIRED), a laboratory belonging both to CNRS and to the École des hautes études en sciences sociales (EHESS) (School for Advanced Studies in the Social Sciences). He highlighted that we lost 20 years in the negotiations. “The emerging economies are now fostering their infrastructure. In 20 to 30 years, they will have fully developed a carbon intensive economy while, if we would have taken the right direction now, promoting renewable energies, we could face a non-carbon intensive economy also in the emerging countries.” For this we need to establish concrete targets and allocate the necessary funds that could assure a successful result to this major economic and social shift.

As scientists at CNRS their work is to observe and to analyse; for them a very evident conclusion is that “by far what we are doing is certainly not enough” in order to confront climate change. The negotiations at COP21, if successful, will only reach some agreements on topics that have been already discussed for many years (emission reductions, financial objectives) but not in the magnitude that scientific evidence is showing us today. Our capacity to react is much slower than the speed of the transformations in the atmosphere and in the environment.

A critical objective in COP21 is to break the circle of distrust between North and South and the huge misunderstanding between the US, France, China, and India. This is no longer about climate, but about energy transition and the need to re-think development. Much more local-global relations and technical cooperation are needed. Thirty years ago, climate issues could have been dealt with primarily as technical problems; now we need to seek greater balance including social, biodiversity issues. What are we losing, what do we want to protect? What do we value?

Dr Gaël Giraud  is an economist and senior researcher at CNRS, Centre d’Economie de la Sorbonne, University of Paris, and Paris School of Economics. He is now the chief economist of the Agence Française de Développement or AFD (French Development Agency) and spoke of how to get money for the right things. France needs to stop subsidizing fossil fuel energy and a European plan is desperately needed to get coherence across the energy flows. Though many of his colleagues do not agree, he expressed that rules are needed in the financial markets that direct investments towards sustainability.

Green Funds are being sought especially for the transformation of the energy sector and the development banks that will manage these funds. Dr Giraud sees the difficulties in the process of adaptation needed and how local communities can make the shift. With Bordeaux, for example, transitioning to a climate of Seville requires adaptations by communities that are not a one-step process and will take a very complex response. What happens with coastal Senegal for instance or the water stress in Bolivia? Do we have to go through sustained disasters before we acknowledge that the lessons are global and adaption can reduce the suffering when taken early enough?

“Adaptation and the need for small locally-based projects like in the area of agroforestry are crucial,” he says. He stressed the need to understand the social framework of the commons and the need for far greater local engagement, not just for the environment, but for education and other areas of social living where we have to establish the rules for sustainable communities. Dr Giraud is a Jesuit and worked in his earlier years in Chad teaching mathematics.

“To give them back their history” is the purpose of Red Eclesial PanAmazónica (REPAM), says Cardinal Cláudio Hummes, delegate of the Brazilian Bishops Conference for the Amazonia during a network meeting. The dioceses of the nine countries of the Amazon River Basin have come together to work in support of the people and life of the Amazonia. “The history of the Indigenous People has been destroyed,” he says, and their life consumed by the exploitation of the area and resources.

REPAM is a network of solidarity and fraternity, not a juridical organization with projects. It seeks a fraternity that respects the integrity of all groups working in support of the people. The Latin American Church has worked much to overcome the poverty; people are poor because they have been abused by the system. Pope Francis is asking what to do for and with the poor of the Amazonia; there are social, ethical and spiritual challenges.

Mauricio López, executive secretary of REPAM, explained that REPAM is part of the planetary strategy as the Amazonia area provides 20% of the entire planet’s water and air, and its integrity is basic to the functioning of the planet. This is not a forgotten area by the world, its water (and hydropower), minerals, forests (also as carbon sink) and land (expanding agriculture) are exploited, but it is the people, biodiversity (genetic richness) and globally sustaining ecosystems that are sidelined.

Building the agenda calls for tools to respond to what is happening, starting with human rights and investigation to document the causes and the need to work with the indigenous to define their rights in local situations. How to provide good living from the different cultural perspectives and stable climate and environment requires further capacity building. Then formation and training are needed from the cultural context for pastoral leadership. There is also the broader area of collaboration in three areas: international networking; research and mapping of concerns, needs and actions; and the communication for social transformation. REPAM is seeking a path of collaboration of support for the Indigenous Peoples of the Amazonia and in turn a quality of life for all.

Naderev “Yeb” Saño, the Filipino diplomat who became the face of the UN Climate Talks in Warsaw (Poland) in 2013 (COP19) when typhoon Haiyan hit the Philippines, became a climate justice pilgrim. He walked across the world to Paris and the walk goes on as he seeks to sustain the movement of Fast for the Climate. Since the concern of climate justice goes well beyond the negotiations, fasting is a meaningful way of building bridges across faiths and cultures while developing a strong advocacy movement.

The first day of the climate conference seems a long time ago when heads of states and governments spoke: US President Barack Obama and Chinese President Xi Jinping sent supportive messages while Indian Prime Minister Narendra Modi reminded rich nations of their high carbon emissions and the need for these nations to ratify the second commitment period of the Kyoto Protocol up to 2020 (the first commitment period ended in 2012). The Marshall Islands made their point, but apart from the political declarations, the discussions are also about money.

It is yet to be seen if COP21 can define the policy. Meanwhile socially, there is a deepening responsibility to go home and make a difference in our own backyards. The hard work is to implement local efforts and strengthen the relation with national commitments, to get a shift from business as gradual to a radical investment in clean energy, and a consumption that is not exploitative or wasteful. We now have the right questions and some of the answers but can we get the commitments? Can the South and the North work with trust?

These are the headaches and there is the heartache of what we look and long for. While we are here, there is the bombing of Syria, the killings in San Bernardino, and we don’t seem to learn that the violence of men and power is not the solution. Other sobering glimpses of the week’s reality started with the flooding in Chennai, India and continue with floods in Keswick, England.