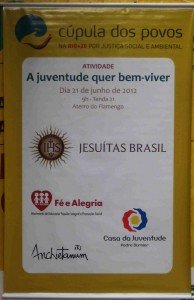 FE Y ALEGRIA
Fe y Alegria (FyA) is a “Movement for Integral Popular Education and Social Development.”  This movement directs its activities to the most impoverished and excluded sectors of the population, in order to empower them in their personal development and their participation in society.  FyA was born in Venezuela in 1955 as a way to consolidate efforts that were being made to provide educational services in the slum zones of Caracas.  Now, it is present all over Latin America, the Caribbean, and parts of Africa.  Education is, and always will be, an excellent way to empower people. 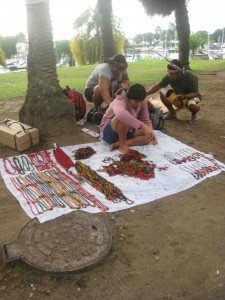 INDIGENOUS PEOPLES
Indigenous Peoples from all regions of the world met at the “Indigenous Peoples International Conference on Sustainable Development and Self Determination” from 17th  – 19th June at the Museu da República in Rio de Janeiro, Brazil.  They were also present both at the UN Conference on Sustainable Development (Rio+20) and the People’s Summit.  Indigenous Peoples face many threats, like the construction of the Belo Monte Dam in Brazil.  Centuries of predation, pollution, colonialism, violation of rights and genocide towards these peoples are not something of the past. 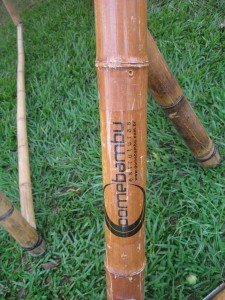 ECOLITERACY
An important emerging term at the People’s Summit was “ecoliteracy.”  This term was first coined by American educator David W Orr and physicist Fritjof Capra in the 1990s and widely used since then.  Ecoliteracy may simply be defined as “the ability to understand the natural systems that make life on earth possible.”  As Orr himself argued, the goal of ecological literacy is “built on the recognition that the disorder of ecosystems reflects a prior disorder of mind, making it a central concern to those institutions that purport to improve minds.  In other words, the ecological crisis is in every way a crisis of education…  All education is environmental education… by what is included or excluded, we teach the young that they are part of or apart from the natural world.”  Ready then to become ecoliterate? 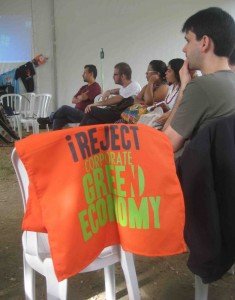 GREEN OR GREED (ECONOMY)? THAT IS THE QUESTION
So what are the issues under the issue (Rio+20)?  That’s the real question at stake in Rio and beyond.  For many, the final negotiating document – The Future we Want – is deeply disappointing.  The Northern Alliance for Sustainability (ANPED), many NGOs, and other civil society organisations, launched an e-petition for ‘the future we don’t want.’  These critical voices claim that “the text makes not a single mention of vital issues such as environmental justice, social innovation or a high-level representative for future generations.  While the text is strong in parts – such as the paragraphs on the Sustainable Development Goals, the reaffirmation of human rights, phasing out of fossil fuel subsidies, and oceans – the text as a whole will not be a sufficient answer to the multitude of crises that we face.”  The remaining question now is: will this declaration be enough to create the momentum we need, or will civil society be left alone to bring the changes we urgently need?